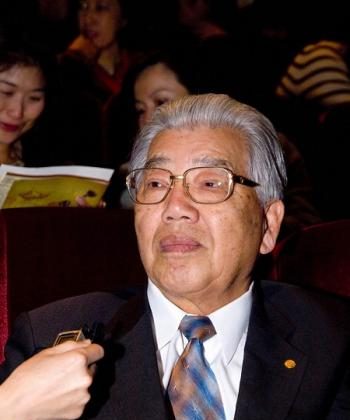 TAIPEI, Taiwan—Divine Performing Arts (DPA) International Company staged its last show in Taipei on March 2, before moving to Taichung. Mr. You, former CEO of the Evergreen Foundation in Taiwan, and his wife were among the 3,000 audience members.

“Very wonderful, very good. I have never seen such a performance,” said Mr. You.

He said that the story content in the show was very touching. He was inspired by the program, Heaven Awaits Us Despite Persecution.

In this dance, a family is torn apart as a father is persecuted for his spiritual belief in Falun Gong.

Mr. You said that gods exist in this world and certainly protect mankind as long as people believe in them. “In other words, if you believe in gods, even if your physical body dies, gods would take you and bring your soul to heaven.”

In reference to the the famous 16th Century Chinese novel, Journey to the West, upon which the dance The Monkey King Triumphs is based, he said: “Like the story of the monk seeking for scriptures, the dance was intricate. The performance was interesting, funny, and vivid. Many people were laughing.”

Like the rest of the world, the global economic crisis has hit Taiwan as well. Mr. You said, “When you have belief in gods, even if you were faced with hard times, they will pass and your heart will remain tranquil.”

Mr. You’s was the founder and CEO of Chang Rungfa’s Evergreen Group, which includes transportation services by sea or air for cargo and passengers.