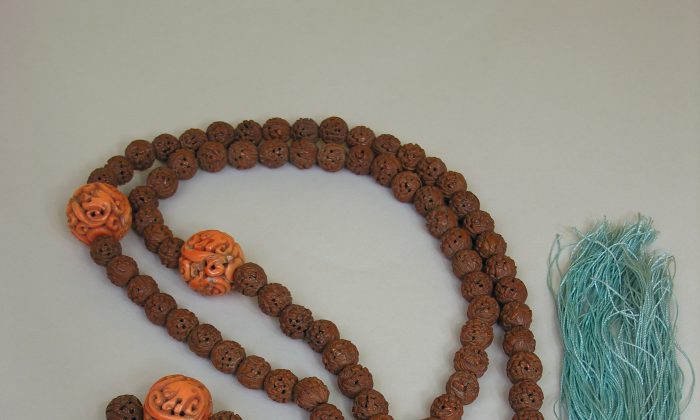 Diverse Prayer Beads in Exhibition at the Rubin

NEW YORK—Of all religious accoutrements, rosaries or prayer beads are possibly the most universal. In their usage, religious practitioners involve their minds, bodies, and voices in total spiritual devotion.

As a result of a recent gift, the Rubin Museum of Art has put on display a vast variety of prayer beads from across Asia.

The exhibition opens with a case of Christian, Islamic, and Hindu rosaries as an introduction to Asian (mostly Buddhist) prayer beads. They are mostly Tibetan, Mongolian, and Chinese, but some come from Thailand, Burma, Bhutan, Korea, and Japan.

Nearly 80 sets of prayer beads dazzle with their material and stylistic variety, but all of them were used for a singular purpose in prayer and spiritual practice, regardless where they originate.

“Beads are meant to facilitate counting and help you keep track of your recitations of mantras,” explained curator Elena Pakhoutova.

Visitors learn about the origins of the standard 108-bead strand, various forms and constructions, materials used, who used them, and how they were used. A digital display features photographs of devotees today in action with their prayer beads.

Some beads are made of seeds native to their regions, cloth, incense, and others of precious materials like turquoise, coral, gold, and silver. Still others are made of human bone to remind the user of the impermanence of the human condition and hasten him to nirvana.

Because beads are kept close to the body and are such an integral part of religious practice, they often show hints of the user’s social status and personality.

“They really treasure them. Each time you make a round of the beads, they gain some of your spiritual and mental energy,” Pakhoutova said.

Most of the strands come from the private collection of Anne Breckenridge Dorsey, who collected them over two decades. Forty of them have been gifted to the museum.

On Wednesday, Aug. 7, the Rubin will offer guests a chance to create their own strand of prayer beads and have them blessed by a lama. Tickets to the event are available on the Rubin website.

“Count Your Blessings: The Art of Prayer Beads in Asia” is on view at the Rubin Museum of Art until March 24, 2014.