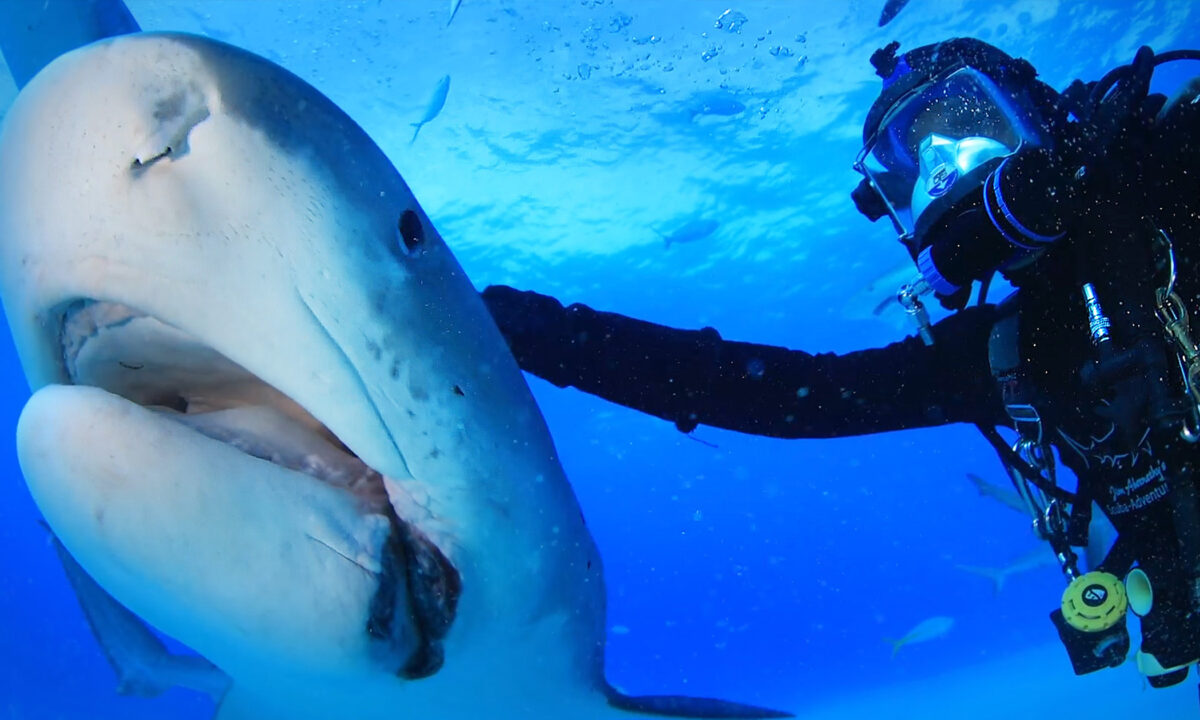 Palm Beach-based scuba diver Jim Abernethy has spent a good chunk of his life under water. As owner and operator of Scuba Adventures, he regularly travels to the Bahamas to a place called Tiger Beach where he dives with clients—and forges lifelong friendships with tiger sharks.

It sounds crazy, but the truth is: sharks aren’t the “mindless maniac monsters” Hollywood has made them out to be, pleas the 63-year-old adventurer and conservationist. Contrarily, they’re incredibly “loving and affectionate,” as his 20-year relationship with one tiger shark, named Emma, tells.

The diver first encountered the 15-foot “gentle giant” in 2001 when she appeared at Tiger Beach during his excursions, keeping her distance initially—sharks are inherently fearful of humans—yet an astonishing relationship soon blossomed.

“Over a period of time of not being abused, [sharks] gain a sense of trust and come closer,” Jim told The Epoch Times. “Once they are to that point where they’re close enough that I can rub their head, I do. At first they’re afraid, but they like it, and they come back routinely to get their head rubbed again.”

The dive guide, also a professional National Geographic photographer and filmmaker, has thousands of clips attesting to these remarkable encounters.

“They’re actually trained on a hand signal, which means, ‘Do you want your head rubbed?’” Jim said. He rubs his thumb and fingers together holding his hand overhead.

Jim named her Emma—she can recognize his boat, follows them, and swims to meet him, “seeking out affection” on a daily basis. Over the years and decades, they formed a bond that Jim describes as a shark who “follows me around like a dog just trying to get its head rubbed.”

Emma can spot Jim when he changes wetsuits like a dog recognizes her owner who changes clothes, he said.

Sharks are often plagued and tormented by fishing hooks. Jim has removed hundreds of hooks from eight different species of sharks—including four from Emma’s mouth alone. This exercise he called a “game changer” in trust building.

“That shark is completely relaxed around you the rest of its life,” Jim said.

Whenever he takes a hook out, he shows the shark the hook, increasing trust twentyfold, as was the case with Emma, who had a hook buried deep inside her jaw hinge.

Jim feared losing an arm removing it but was determined to.

Remarkably, she swam to him, opened her mouth and bit down on a hunk of brain coral, easing fears of losing a limb, allowing Jim to pull the hook free.

“She was bleeding profusely, I showed her the hook, no aggression, no nothing,” Jim told the newspaper. “She swims around me a couple of times, and spends the rest of the week with us.

“Every single day … I would open up her jaw and see how bad the wound was.

“The guy that she did this to, it scared the [expletive] out of him.

“I think she thought that me opening her mouth is a game,” he added. “There’s so many things that have happened across the years with her that are literally unbelievable.”

As best friends often do, Jim has taken countless selfies with Emma—but says that others shouldn’t follow his example by taking selfies with wild animals.

Forging a bond 20 years in the making, Jim and Emma were separated for the first time when the pandemic put an eight-month pause on diving in 2020. In August, eager to plunge back in, Scuba Adventures returned to Tiger Beach.

But Emma was nowhere to be seen.

After surfacing, however, Jim heard a cry from fellow scuba adventurer Hex: “Emma’s here!” Jim rushed to don his gear and meet his undersea soulmate.

“She was the same exact shark,” he told The Dodo. “It was as if no time had gone by whatsoever.”

Passing his camera to Hex to free his hands, he showered affection on his longtime apex predator pal.

“Once Jim was down there, it was really amazing to see,” Hex said. “You could tell she was happy to see him as well, just circling, circling. … She’s just such a lovable shark.”

Attempting to articulate his bond with the powerful yet loving wild animal, Jim said, “Trying to describe what it’s like really makes me believe that the English language isn’t good enough.

“To have a connection that lasts the entire time you’re in the water is so moving and so impactual.

“One of the best things that’s happened to me is this discovery of the affectionate side of sharks.” 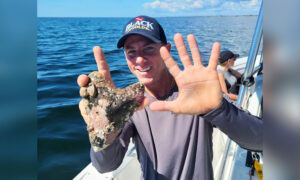 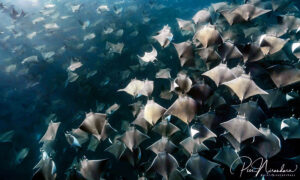 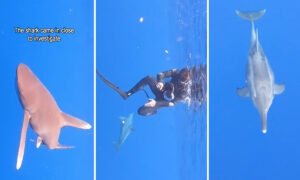 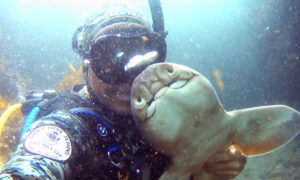