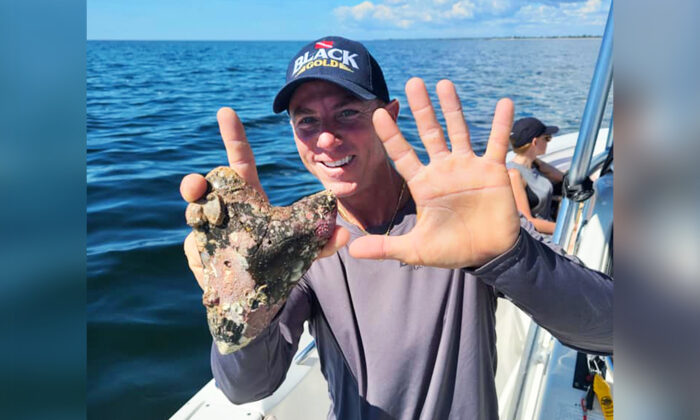 When Floridian Michael Nastasio, owner of  Black Gold Fossil Charters, stumbled on his first megalodon tooth fossil on a beach in Venice, he was hooked on the hunt. After getting certified as a diver, he started taking tours out into the Gulf of Mexico in seek of the colossal chompers. He’s found thousands of them over the years; most, however, were either broken or less than the magic 6-inch mark.

Last month, Nastasio stumbled upon his first megalodon tooth exceeding that length, measuring a full 6-inches, and one sixteenth past the mark.

Just minutes into a group dive on Oct. 15, Nastasio, who was the last one in the water, spotted the algae-encrusted object.

“I realized what I was looking at,” he told The Epoch Times. “I knew when I saw it that it was six inches, and I just yelled underwater. And I said, ‘I did it! I finally did it!’”

After surfacing, Nastasio showed off his fossil on Facebook triumphantly, captioning: “Well after 10 years of hunting Venice for a whole 6-inch Megalodon shark tooth I did it.

“I’m so happy right now and literally still shaking. Casper my cat is totally helping me clean it if anyone was wondering.”

With extreme care, Nastasio started cleaning it using a water-vinegar solution and a wire brush.

“Usually, I can clean a tooth in minutes, but just because of how special it was, I really, really took my time and went slow and made sure that no mistakes were made,” he said.

“I wasn’t sure how pretty the tooth was going to be until I cleaned it.

“But the more I uncovered, the prettier it was.”

Although no complete megalodon skeleton has been found, judging from the size of tooth fossils, it’s believed they measured 10.2 meters (33.5 feet) in length on average—the largest measuring 17.9 meters (58.7 feet) long. It’s possible some specimens exceeded this, according to researchers, measuring 25 meters (82 feet) from tip to tail.

These prehistoric precursors to Jaws could have weighed between 30 tons to over 65 metric tons, with females exceeding males in both length and weight—making the modern-day white shark look like a guppy in comparison.

Megalodons could possibly be the largest apex predator ever to exist, feeding on the ancestors to sperm whales, dolphins, and killer whales.

For these monstrous fish to have hunted such massive prey, their jaws would have had to open 2.7 to 3.4 meters wide, and they could have easily swallowed two adult humans side by side, according to the Natural History Museum.