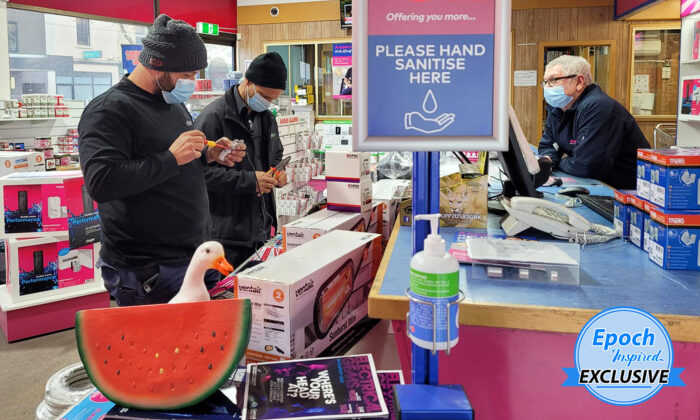 An Australian mother who had lost two nights of sleep was eternally grateful to two incredible electricians who jumped into action to help fix her toddler’s broken watermelon night light along with paying for the parts.

“The broken watermelon night light fixed everything,” Natalee Leach, 37, told The Epoch Times. “It allowed me to be a recipient of an amazing act of kindness, brought light back into a dark room, revived our sleep, and restored faith in humanity in the darkest of times.”

It all began on Aug. 25, when Natalee, from Melbourne, arrived at an electrical supply shop—which was mainly open to support electricians and tradesmen for essential services during the lockdown—to fix a broken watermelon night light.

“I will contest now, the broken watermelon night light was essential, our lives depended on it,” Natalee, a payroll manager in the service industry said.

The watermelon night light, Natalee explained, belonged to her youngest daughter, Ebony, who was born during the lockdown in April 2020.

Ebony, according to Natalee, has had a strict nighttime routine with the watermelon night light, which is used as a cue to indicate that sleep time has arrived.

Thus when the watermelon night light stopped working, the free-spirited toddler was determined not to sleep, which meant she didn’t let her parents, Natalee and Stuart, sleep either.

“This continued for two nights,” Natalee recalled. “I was a mess. The next morning, I just sat at the kitchen table and cried. I cried about a broken watermelon night light.”

Describing herself as a “sleepless, weeping, high on coffee kind of frantic,” Natalee arrived at the store and spoke to the customer service team about the broken watermelon night light.

“[They] started saying something about rewiring it and I just looked back at them completely glazed over with zero comprehension, phasing in and out of coffee letdown haze,” Natalee said.

However, lucky for Natalee, as the team mentioned the word “rewiring,” two electricians walked in and sprang into action to help the mother of two.

The electricians then started directing the customer representative to get transformers and cords. “They performed wizardry on the watermelon night light, and got it working again,” Natalee recalled.

However, it didn’t just stop at that. After fixing the night light, one of them went to the counter and requested the representative to put the bill to his “pay it forward” account even before Natalee could get to the purse in her handbag.

“What an incredible act of kindness!” Natalee said. “I was eternally grateful, which would usually result in a hug of gratitude, though we kept our Covid-19 distance and I simply just repeatedly said thank you, I think about 20 times.”

Thankful for everything, Natalee shared the encounter on Facebook where it tugged at netizen’s heartstrings, amassing almost 6,000 reactions.

Reflecting back at the situation, Natalee said that she wasn’t crying about the broken watermelon night light but because of lack of sleep. She says she wasn’t rational, because of all the fear that the Covid-19 situation has brought about.

Unable to think rationally due to the lockdowns, which have lasted over 18 months in the city, Natalee has been fatigued.  Additionally, parenting a lockdown baby during this time, she says, has also been a challenge, as Ebony is “clingy” and is “craving for attention” as she wants to go outside but is unable to due to strict lockdown restrictions.

However, the whole experience at the electrical supply shop has given Natalee an opportunity to think about paying it forward herself.