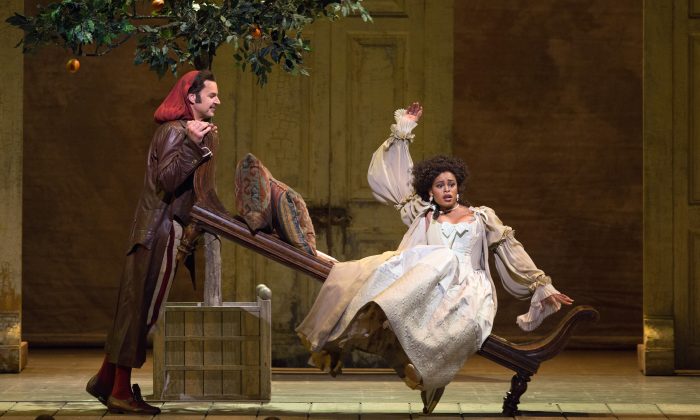 Dishing Out Opera’s Secrets at a Dinner Party

Opera is dramatic—it’s emotionally expansive, sensorily explosive, and grand or even over-the-top. It also has the reputation of being one of the most buttoned-up and stuffiest art forms.

“If you haven’t had a friend walk you into it, or a trusted teacher lead you through an experience, someone who says, ‘Let me introduce you to some of my favorite things’ … how do you go in?” asked Mikel Ellcessor, interim general manager at classical music station WQXR.

Opera was so much fun and so immersive, Ellcessor thought, that it seemed like a waste not to share it. So, why not throw an opera party?

When Ellcessor was planning the event, the festive salons of Vienna and Salzburg from a few hundred years ago came to mind. First, there would have to be a great host to throw the party, he imagined, as well as wonderful food and drinks. At some point, someone would stand up and start singing beautifully; then the party would resume; and then maybe someone else would stand up and sing. “What if we did that?”

WQXR partnered with countertenor Anthony Roth Costanzo, who “has an undeniable, unstoppable love for the art form,” Ellcessor said. He gave Costanzo full reign to execute his vision, and now, several months later, they are presenting a series of opera parties at The Greene Space. The first takes place on April 17.

The Underbelly of Opera

At The Greene Space, Costanzo and F. Paul Driscoll, editor-in-chief of Opera News, will co-host an evening of deception, reinvention, alternate realities, and exploring mistaken identities. Countertenor David Daniels will perform, and award-winning chef Patrick Connolly will serve food that isn’t quite what it seems at first glance either. All of this will take place in a space designed by artist Doug Fitch.


This is the first of three themed parties Costanzo has conjured up to present opera that completely defies expectations.

As an opera singer, you’re juggling 10 different things at once: keeping an eye on the conductor while minding your vocal technique, keeping one part of the brain engaged with the language while your coat gets caught on the doorknob and the prop drops to the stage with a clatter.

The event will give the audience a little sense of that—a look inside the performer’s mind, Costanzo said. Then, on the other side of the stage, there will be Driscoll, an opera critic, who will write about it.

“We want to get inside his head in a live action demonstration.”

At the same time, Costanzo wanted to take the opportunity to incorporate all of the art’s forms, old and new. Opera at its inception was a combination of poetry, stage design, music, dance, and so on.

Today, there are a slew of technological innovations to take advantage of, and culinary arts to add to the mix as well, “such that the experience is a truly interdisciplinary one,” Costanzo said. “I wanted to bring together artists from all different genres outside of opera, but have it sort of center around the story and the history of opera.”

It’s amazing there are just so many opera singers just chomping at the bit to let their hair down.
—  singer and organizer, The Opera Party

With all of these moving parts, plus the near-impossible task of booking world-class artists to perform together on the same day, there obviously isn’t much time left for rehearsal. That’s not necessarily a bad thing, however. “We want it to be more spontaneous, more improvised, more like a dinner party … to have it be theatrical in spirit,” Costanzo said.

An “opera party” is somewhere between going to the theater and to a dinner party—where a beautiful aria might be performed over an apéritif, as naturally as someone’s story about their recent trip to India.

Telling the story of opera to people who might not think they’re interested in it is something Costanzo has been doing for half of his life.

Costanzo‘s performing arts career began with musicals, which led to Broadway and then to The Metropolitan Opera. When he was introduced to opera, he realized it was something “so psychologically complex, and [that] musically has a depth of expression” that was really astounding.

“You have a handful of moments in life that have great significance—and I mean those big breakups, deaths, great loves, great joys—those moments don’t happen so often, and as we get older, we realize there’s just a handful of them,” he said.

“With opera, we’re dealing with those moments every single day.” In every opera plot, there are events like a character being made to choose between a loved one and their country, or another standing up for their beliefs knowing it will condemn them to death. In opera, performers confront the big moments in life head on, feeling them in such an emotionally intense way, and sharing that with hundreds of people, he added.

“It allows us to have the perspective to approach those moments, when they happen, with more depth,” Costanzo said. “Experiencing opera, whether it’s from the inside or the outside, gives us the possibility of finding more meaning in our lives, which I think is a wonderful and important thing.”

Most of his friends aren’t into opera, he said. So explaining the art may mean comparing the chances of a soprano hitting a high note with a baseball player’s batting average, to help people understand why opera viewers watch a singer so raptly.

“Really, if I can get them to experience it, if I can give them a key to open the door and they can see inside, I think there’s something inside of them that will respond to it,” Costanzo said.

He was gratified to find that the colleagues he has invited to sing and participate in these events feel the same way. They are so devoted to the art form, he said, and there aren’t a lot of opportunities for them to share with others how fun opera truly is, and to not have to worry about being their most polished selves on stage.

“It’s amazing, there are just so many opera singers just chomping at the bit to let their hair down,” he said.