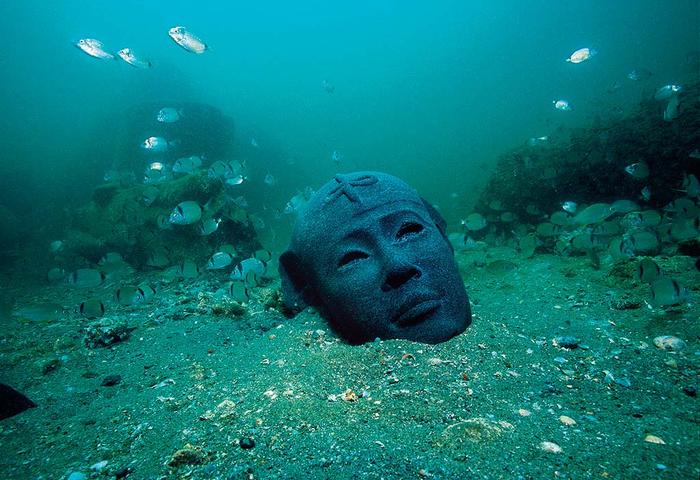 Discovering the Lost City of Heracleion

For centuries, the city of Heracleion has been shrouded in myth and thought to be a legend. The city, visited by Paris and Helen of Troy, and mentioned by numerous ancient historians such as Diodorus and Herodotus, had been lost for nearly 1,200 years until French archaeologist Franck Goddio discovered it in 2000.

Thought to have been initially founded in 12th Century BC, the city, also known as Thonis, disappeared deep beneath the surface of the earth 1,200 years ago. Today, the mythical city’s treasures continue to be unearthed. Among the lost treasures found mere kilometres off the coast of Alexandria are giant statues, slabs of stones with ancient Greek and Egyptian inscriptions, dozens of ships, gold coins, bronze statues and more. Below is a collection of photographs taken by Franck Goddio and Christoph Gerigk of what has so far been discovered.

A 5.4 meter statue of Hapi, god of flooding of the Nile. This is the largest statue dedicated to Hapi that has ever been found.

A giant granite statue of a Pharaoh.

A 4.8 meter statue of an unidentified Ptolemaic queen.

Archaeologist Frank Goddio with the Heracleion

A monolithic chapel dating to the Ptolemaic period.

A recreation of what the city is thought to have looked like before it sank.

This article was originally published on Egyptian Streets.