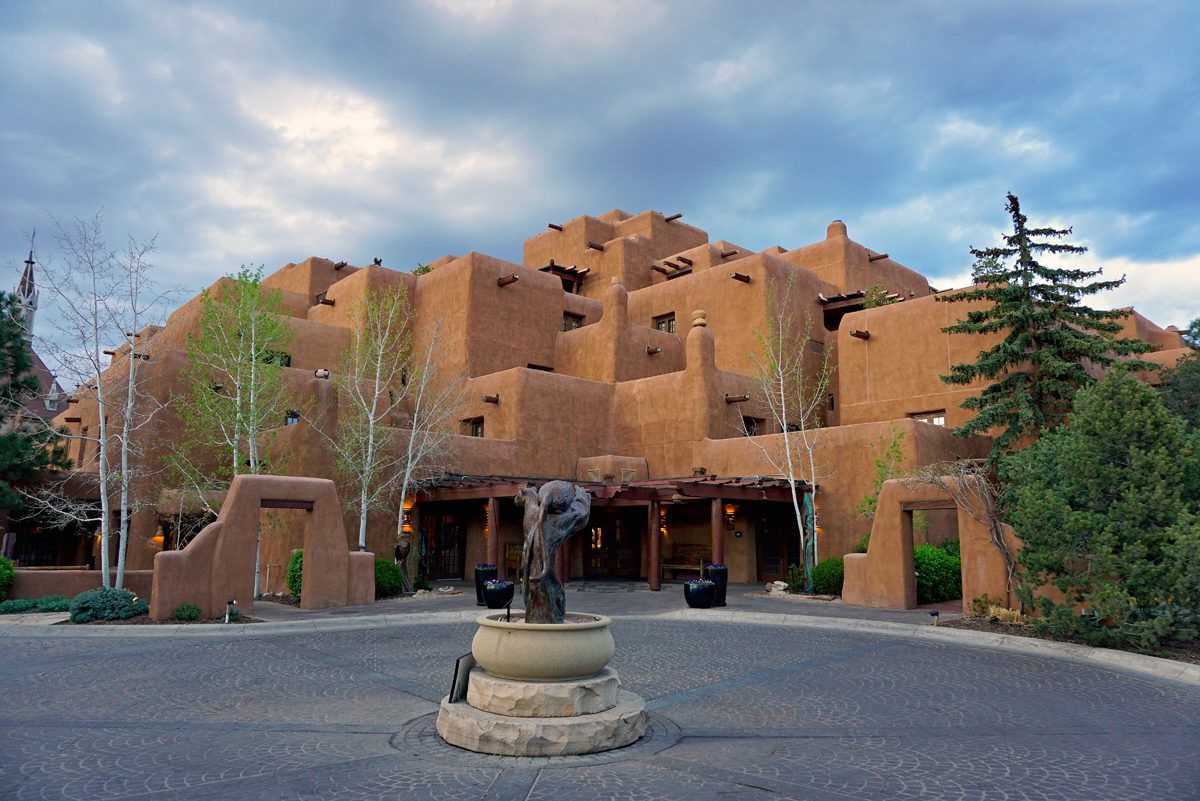 The Inn and Spa at Loretto is located near the Palace of the Governors and the historic Santa Fe Plaza, N.M. (Richard C. Murray/RCM IMAGES, INC)
Travel

A grain of sand in the hourglass of time
BY Richard C. Murray TIMENovember 11, 2014 PRINT

The Santa Fe Trail is a shopper’s nirvana for Southwestern art and native handicrafts. A stroll down the roadway will bring you to the plaza and the Soldiers’ Monument, a 33-foot stone obelisk dedication. The inscription reads: “To the heroes who have fallen in various battles with… Indians in the territory of New Mexico.” In 1973, a blonde-haired protester chiselled off the word “savage.”

What’s ironic is the statue’s proximity to the Santa Fe Plaza Indian Market along the Palace of the Governors. This is where Native Americans meticulously arrange their sought-after jewelry on blankets, and have done so every day since 1922.

Tourists make a beeline for the handsome accessories—necklaces, rings, and bracelets. We especially liked the shiny, sterling silver money clips with colourful stones by Eileen and Jeremy Rosetta. We jokingly referred to them as Rosetta stones; Mrs. Rosetta said she was going to tell her husband that one when she got home.

We asked artist Debbie Reano if structured booths might increase sales. Her response was representative of Santa Fe: “Why change something if it has worked for years?” she asked rhetorically.

Our mission in the oldest U.S. capital city was to find out why time seems to stand still and tradition is so important. As we approached “The Great Trail” by air, the snow-capped summits were stunning. The altitude is more than 7,000 feet above sea level, approximately 2,000 feet higher than the “Mile-High City,” Denver, Colorado. The diminutive Santa Fe Municipal Airport set the stage for things to come—low-level, adobe-style buildings scattered over an arid desert landscape nestled between mountain ranges.

Living in the Past

Even our lodging was inspired by the Pueblo Indians and Spanish missions of yesteryear—brown setback rectangles, flat roofs, and thick wooden beams—referred to as Pueblo Revival style. The Inn and Spa at Loretto is centrally located near the foot of the Sangre de Cristo Mountains, the southernmost range of the Rockies.

With respect to time standing still, Dana Syracuse, the Inn’s director of sales and marketing, said, “We have really strict zoning laws in place that prevent buildings from being built that are too tall or with different colours. So everything has to blend in with the landscape.” Due to city ordinances, the top two floors comprise the only hotel penthouse in the city of 68,000.

Directly next door to the inn sits the Loretto Chapel, the home of the “miraculous” staircase. Throngs of visitors and professional photographers come each year to witness this elegant structure that has been the subject of countless movies and TV specials, including “Unsolved Mysteries.” Today it is only used for weddings and special events.

The story dates back to the late 1870s when a nameless carpenter and his donkey appeared one day looking for work. After completing the staircase a few months later, the man vanished without pay, never to be heard from again. The two 360-degree spiral turns and lack of a centre core in the staircase perplex modern-day architects and engineers.

To fully explore the New Mexican landscape—red-hued desert mesas and basins framed by monumental mountains—we took a tour with Santa Fe Walkabouts. The owners, Georges and Sue Mally, hauled us in a 6-wheel-drive Pinzgauer down Route 66 and up La Bajada Hill.

The “Pinzie” is a Swiss Army all-terrain vehicle from the ’70s and ’80s that possesses astounding agility. Georges navigated boulder-sized rocks, bounced in and out of huge holes, negotiated sharp turns, and maneuvered 45-degree slopes.

The off-road experience not only facilitated grandiose views, but we also found many Indian petroglyphs—images carved into rocks. We were especially intrigued by a simple coyote etching; our guide surmised that it may have been the work of a child.

As for tradition, Alan Osborne of Southwest Seminars declared: “The amazing thing is that the descendants of the people who left the rock art are still here today in the villages surrounding the city of Santa Fe.”

Many retirees choose Santa Fe over Florida for its arts scene, clean air, and blue skies—estimated at 300 days a year. Santa Fe Photographic Workshops is a world-renowned educational centre offering classes in film, digital photography, and digital imaging. Director Reid Callanan spoke with pride about their Cuba program and urged photographers to go there within the next five years before it becomes gentrified.

We relaxed one evening at the Cowgirl Santa Fe BBQ & Smokehouse and listened to alternative rock music. Although the restaurant is famous for its bison burgers and BBQ, co-owner Nicholas Ballas revealed, “The chef is a Maine boy who knows his seafood.” The seared scallops were among the best we’ve ever tasted.

A word of warning: one may experience mild altitude sickness. Symptoms of the decrease in oxygen levels can include headaches. Dr. Josh Brown of Santa Fe’s Internal Medicine Specialists recommends consuming extra water even a day or two before your visit begins. Then while there, drink 10-14 glasses of water instead of the usual 8-10.

We did limit our caffeine and alcohol intake, but next time we’ll eat more foods high in potassium, such as broccoli, bananas, tomatoes, and chocolate in order to replenish electrolytes.

So what’s the verdict? Michael Pitel, the President of TravelSource New Mexico, asserted his perspective on time standing still: “I think it’s an illusion.”

“Most buildings downtown here conform to the Pueblo Revival architectural style. Civic leaders adopted it in 1912 because they wanted to give Santa Fe a tourist-destination makeover. Over the decades, it became our city’s signature architectural style.

“But if you look closely—and if you could peel back the earth-tone coloured plaster on many of the downtown buildings—you’ll find different building methods. Some of the oldest structures have adobe bricks that were made in the Spanish Colonial period. Other buildings were constructed of Victorian-era red bricks that began to arrive by rail after 1880.

“Then there are the newer, bigger buildings of wood frame and steel frame construction. Santa Fe has always been about change, but most of those changes have occurred gradually and quietly.

“For me, the timelessness here is when you step back from all of this. You see the unmarred blue skies, the near-constant sunshine, the July and August thunderstorms, and the winter snowfalls. You see the earth-tone colours of the landforms and Santa Fe in relation to the towering Sangre de Cristo Mountains.

“You realize that the sky, the sunshine, and the land hold dominion over man and not the other way around. It’s a clarifying and humbling perspective.”

Co-writers Richard C. Murray and Laurie Heifetz are world travellers based in New York City. In addition, Richard is a celebrity photographer and Laurie covers entertainment and technology. They can be reached at TheTravelProse[at]gmail.com