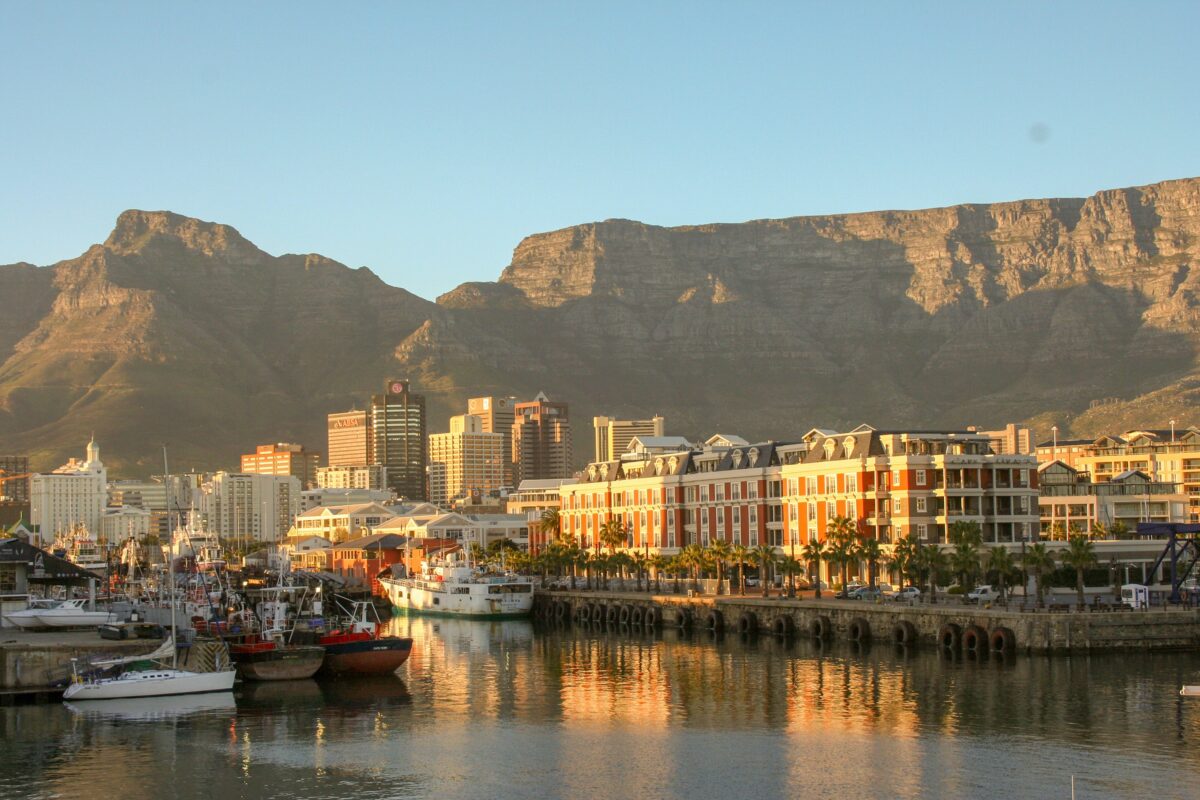 Scenic Cape Town is framed by flat-topped Table Mountain and Lion’s Head Mountain. Along the Victoria and Alfred Waterfront is a mix of hotels, including the historic Cape Grace as seen here, upscale restaurants and trendy restaurants. (Mary Ann Anderson/TNS)
Travel

Discover the Tints, Textures and Tastes of Cape Town

On an early spring morning, I open wide the sliding doors of my room at Cape Town’s Ellerman House, a hillside hotel above the Atlantic. From the balcony, I watch as low clouds and ghostly mists whisk across the bluest of skies. I don’t know why the color of the sky is so much richer and deeper in Cape Town, on the very southernmost point of the African continent, but it most definitely is, almost to the point where it’s lapis lazuli rather than blue.

Below the balcony, somewhere just beyond my line of vision, the wild surf of the Atlantic hammers the South African shoreline in endless, thunderous waves, its echoes both enchanting and soothing. Out beyond the surf, massive freighters and ships dot the ocean, quietly gliding away to unknown, distant lands.

The wind is cold, dredged from depths of the Antarctic, the closest landmass to South Africa other than Africa itself, but it’s bearable with the light sweater I’m wearing. I watch seabirds in flight punctuate the cloud-smeared sky, struggling against steep ocean winds but always winning the battle.

Whales come here every year, from about June until November, to mate, calve and feed. Locally it’s called the Whale Route, with pods of southern right whales, humpbacks, Bryde’s and sometimes orcas skimming the iridescent water. Every once in a while I catch glimpses of the whales as they surface and then slide back down into the water with a flip of their gargantuan tail fins. Staring patiently out to sea, I never tire of the natural circus of the cetaceans and am thrilled when I see puffs of air from their blowholes.

Resting in the shadows of the severe and imposing Table Mountain, not too far from the intersection where the impossibly green waters of the Indian Ocean collide with those of the cold, ice-blue Atlantic, my view of Cape Town from my hotel rises in an unforgettable display of tints and textures.

If you’ve ever had the romantic notion of getting away from it all, really getting far away, then Cape Town is one of the most postcard-perfect cities you could visit and is perhaps as far away from home as you can get. Shaded by the 3,500-foot reach of iconic Table Mountain, the cloud-shrouded behemoth that rises scepter-like into the mist above the city, Cape Town is about a 15-hour nonstop flight from the U.S.

The stunning city, sculpted with flower-filled balconies, leafy streets, mosques, minarets and townships, is an open canvas of culture and art. At every turn is something special, from its staggering natural beauty to its museums that harken to every period in South African history, and to the striking architecture of the Victoria & Alfred Waterfront, probably Cape Town’s centerpiece. The sun-drenched waterfront, known simply as the V&A, has an Old World ambiance. It is a working harbor that basks underneath Table Mountain’s shadows, and its old warehouses and docksides contain a continuously buzzing beehive of trendy restaurants, pubs, upscale boutiques and shops. Luxury combines with history and romance among the V&A’s plethora of grand hotels, including Victoria & Alfred, the Cape Grace, Table Bay and the One & Only. Nearby are the Ellerman House, Twelve Apostles Hotel and Spa, Belmond Mount Nelson and The Silo Hotel.

On the opposite side of the Cape Peninsula from Cape Town is False Bay, where the echoes of a colony of diminuitive African penguins living on Boulders Beach are distinguished by plenty of loud braying and honking. About 40 years ago the adorable tuxedoed birds showed up at Boulders Beach, a series of hidden sea coves tucked on the edge of Simon’s Town on False Bay and have been thriving there ever since. Even the locals love their little furry pals.

Farther south along the peninsula is the Cape of Good Hope, once a stop on the spice routes of ancient times. The cape, perfect for biking and hiking sojourns for two, was for hundreds of years the shipping lane for early explorers who rounded Africa’s tip before sailing west toward the New World or east toward India and Asia. The wind is sharp at the Cape, drawn from the Antarctic, and whips the sand as fine as diamond dust. The sky here is an incredible shade of deep blue, and at night the constellations, with the Southern Cross as the heartbeat, ignite the sky with an ethereal glow. Watch for wandering elands, ostriches and baboons among the cape’s rolling hills, towering mountains and tranquil, wildflower-filled pastures.

An abundance of extraordinary dining experiences will leave you with a newfound appreciation for South African food in this melting pot culinary capital of Africa. Every international flavor is here, but the must-try local dishes are bobotie, a savory curried meat, fruit and egg mix that’s the national dish of South Africa, and bunny chow, which isn’t bunny at all but a hollowed-out bread loaf filled with piquant curry dishes, usually lamb, chicken or vegetables. Other local dishes are springbok, warthog and line fish, which is any fish hand-caught daily by line and prepared the same day. In other words, it’s the catch of the day. Pair your bobotie, bunny chow, line fish or whatever your meal may be with a South African wine or a cocktail of Amarula, a sweet, rich liquor made from the local marula fruit. The marula, which grows in the bushveld and savannas of South Africa, is a favorite snack of elephants.

Traveling due west from Cape Town, the land rises to the Cape Winelands and the air becomes intoxicatingly fresh and sweet. Drifting through the storybook villages of Franschhoek, Paarl, and Stellenbosch, you’ll sip and savor not only the wines but also enjoy breezing past the heavily Dutch-influenced architecture. Grand wine estates such as Spier Wine Farm, Delaire Graff Estate, the Waterford Estate and Boschendal, all where the winemaker’s hands seem permanently stained with grape and all wonderful to visit and photograph. The Cape Winelands produce a range of reds and whites, including the signature South Africa wine, the deliciously rich Pinotage, a fusion of Pinot Noir and Hermitage.

Cape Town abounds with unique experiences not found anywhere else. You can visit Robben Island, the desolate island prison where Nelson Mandela spent nearly two decades of his life, or perhaps take in an afternoon with Roots Africa for an extensive cultural tour of places important to understanding apartheid and the African perspective, including Langa and Khayelitsha Townships, the millions-strong shantytowns created by the South African government under apartheid.

Also included in the mix of things to do are visiting the gorgeous Bo-Kaap neighborhood with its picturesque architecture, cobblestone streets, and vividly-colored homes touched with heavy influences of Malaysia, Indonesia and India. Afterward, or before, romp through Kirstenbosch Botanical Gardens, lush gardens breathtakingly smothered with indigenous flora and fauna.

Romantic getaways and international travel have proved elusive these past couple of years, but for those lovebirds seeking the perfect time and place to let it all go, Cape Town will prove to be worth the wait.

For more information on what to see and do in Cape Town, visit www.capetown.travel. Also visit South African Tourism at www.southafrica.net.
United Airlines offers nonstop service from the U.S. to Cape Town, while Delta Air Lines offers connecting service through Johannesburg. Other international carriers offer connecting service from the U.S. through Europe, including KLM, Air France, Virgin Atlantic and British Airways.
Officially, 11 languages are spoken in the country, but almost everyone speaks English and Afrikaans plus a mix of European, Arabic and Asian.