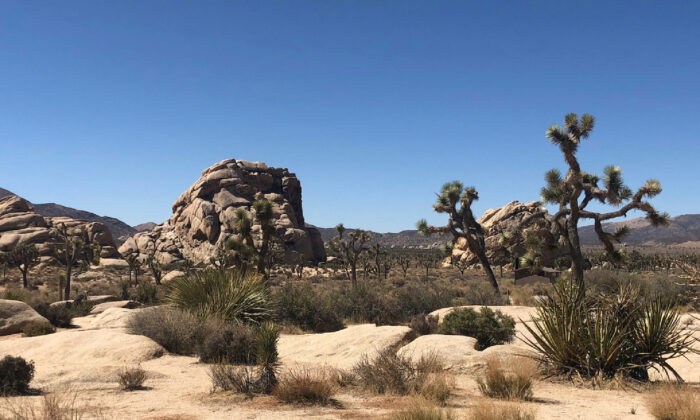 The Joshua trees that give California's Joshua Tree National Park its name are plentiful here, but less so in other parts of the Southwest. (Bill Neely)
Destinations

Discover the Flora and Fauna of Joshua Tree National Park

Ordinarily, we would have driven through the desert landscape as fast as possible to leave the dryness, extreme heat, sand, cacti, and rattlesnakes behind us. But our son, Tom, who loves the desert, wanted to introduce us to Joshua Tree National Park, one of his favorite places to hike. We had seen pictures, but we never anticipated the wonders he helped us discover and appreciate during the three days we spent with him in this area of California’s Mojave Desert.

The park encompasses 1,235 square miles, of which 671.4 square miles are controlled by the Wilderness Act. A two-lane highway runs through the park from which many dirt roads branch. The unusual dark-green Joshua trees are scattered throughout, and some places have literal groves of them, although they are sparse in other places in the Southwest. Some grow from seeds and others from rhizomes as a colony, with roots spreading underground. These fragile evergreen succulents are delicate, despite their appearance. The slightest injury or environmental stress can wreak irreparable damage and cause the tree to die.

They were named by Mormon pioneers, who saw them as the image of the biblical prophet Joshua with arms raised in supplication to heaven.

It turns out they are actually members of the yucca family. After a winter freeze. they can have beautiful, large, white bloom clusters in early spring, and they are pollinated by moths. Coahuila Indians used the Joshua trees’ pointed leaves for weaving sandals and their flowers and roots for food. The roots also yield a red dye.

We wore sturdy hiking boots, covered ourselves with sun-protective clothing and lotions, wore hats and sunglasses, and carried water as we headed out for our explorations in the very early morning, so as to return to our car before the heat of the day. The visitor center provided a map and information about the best places to go.

One of our hikes took us to a protected habitat of large tortoises and bighorn sheep a few miles outside of the park. We didn’t see any of these animals, because they are wise enough to stay hidden or go out only at very cool times. On the days we were there, the temperatures were 100-plus degrees in midday to late afternoon and dropped into the 60s at night. Even in summer, temperatures can drop into the 40s after dark.

Some large mountains and hills are covered with thousands of rocks that have tumbled down the sides; others are massive rock formations with gigantic boulders. Both present their own challenges, but we hiked on because we wanted to see the varieties of desert plants. We could identify some; others we photographed to look up later. The elevation is about 4,000 feet to 6,000 feet throughout the park.

About 12 miles from the North Entrance is Cholla Cactus Garden, where you can see thousands of unique teddy bear cholla cacti. At this merger of the upper Mojave Desert and the lower Colorado Desert, we stopped to walk a quarter-mile level loop passing through these plants, which were covered with fluffy white blooms in June. The plants are prickly to people, but when pieces of the cacti break off, they grow roots and become a low forest. They provide food for many animals, and they are a perfect perch for birds.

Despite the harsh climate, some 57 species of mammals, 46 species of reptiles, 250 species of birds, 75 species of butterflies, two kinds of amphibians and scorpions, tarantulas, coyotes, and many more fauna have adapted to survive here.

Joshua Tree has dry campsites for tents, mostly first-come, first-serve, with a gigantic black bowl of stars shining brilliantly above. The sky here has little light pollution, so the stars are easily observed and wondrous to appreciate.