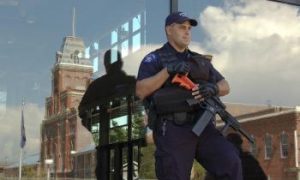 KAOHSIUNG, Taiwan—Mr. Su Rongqing, director-general of the Farmers Association, Pingdong County, accompanied by his wife, watched Shen Yun Performing Arts’ second show in Kaohsiung on April 6. He gave high praise to the design and artistic connotation of the programs, saying, “I have seen a lot of art performances since I was young. Shen Yun performance is the best!”

Mr. Su said sincerely, “Shen Yun Performing Arts was founded by Chinese artists in New York and now it has expanded into three performance companies and orchestras of comparable size. It is truly amazing and remarkable!”

He described what he felt about the program’s expression, “I think the connotation of divinely-inspired traditional Chinese culture and faith, passed down from 5,000 years of history, is fully encompassed by the performance.

“Every program is truly great. … It has reached unparalleled artistic realm. All the performers are of a high standard. It is very challenging to achieve such excellent synchronicity in their dancing. Compared with the quality of Shen Yun, ordinary performances fall behind significantly.”

Mr. Su indicated that he would invite friends and relatives to see Shen Yun next year.