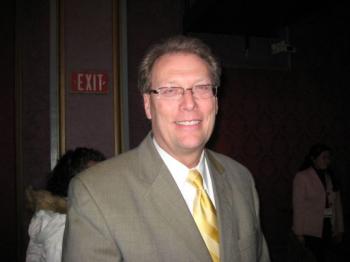 Director at Roman Catholic Archdiocese: ‘Shen Yun has spoken to my heart’

BY Leigh Smith TIMEMarch 10, 2010 PRINT
INDIANAPOLIS—Murat Theatre saw the final performance of Shen Yun Performing Arts on this leg of its 2010 World Tour on Wednesday, March 10. The audience were appreciative to have the opportunity to experience the millennia old Chinese culture through music and dance.

David Bethuram, CSS Executive Director at Roman Catholic Archdiocese of Indiana was there and thoroughly enjoyed the performance.

“All it is very beautiful. The colors are absolutely amazing.”

“But what I really like about it is the spiritual tones to everything, to all the dances to all the music,” said Mr. Bethuram. Some of the performances depict heavenly beings and heavenly scenes touching people’s hearts and inspiring them to become more moral in their lives.

Shen Yun has two emcees to explain the history behind the performances, thus enhancing the audience’s appreciation.

“The Tibetan dance [Tibetan Dance of Praise] was very, very well done—just very, very beautiful dancing. I really enjoyed the explanation before hand, so that we get a feeling of why the dancers are dancing the way they are. So it has been a beautiful show.”

Each Shen Yun costume is researched, the materials and thread found before being lovingly handmade, bringing a visual feast to the viewers.

“The embroidery, elegant embroidery, was very, very interesting because in our family the women do most of the sewing and that kind of embroidery shows that everything that they do when they sew is in love. So that one speaks a lot to me.”

“I think probably the whole show so far has spoken to my heart from the stand point of—one by one, each particular one, had a special message or insight, either something that is very common, turmoil, challenge, even the possibility of a greater insight into the life of China which I have not experienced. So from that stand point I think it touched my heart.”

This was Mr. Bethuram first encounter with Shen Yun. “I was encouraged by a colleague and so she made sure we that we came here. I really pleased she invited us to come.

“I would certainly come next year,” he added.

With reporting by SOH Radio Network.

This was the final performance of Shen Yun Performing Arts at the Murat, they will be performing in Kansas City March 13 to 14.