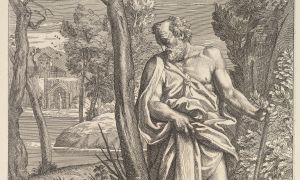 Diogenes of Sinope, the Dogged Cynic
0 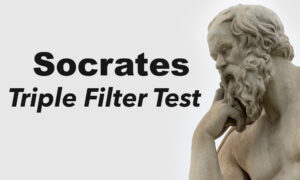 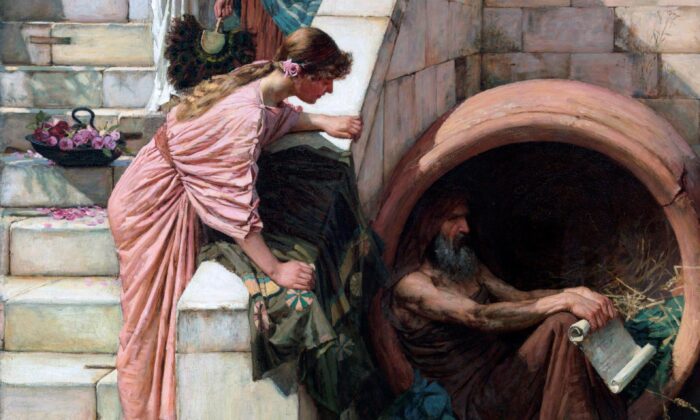 Diogenes and the Pursuit of Truth

Sometimes, on the rare occasion I get a chance, I sit and ponder what it means to be me. Who am I?

I try removing all of the qualities and characteristics I perceive about myself to see if I can think of myself as still me without them. Most of the time, I can. I can’t, however, think of myself without my love of art. Something about it informs me about who I might be as a living being on this drifting globe we call Earth.

I came across a wonderful painting by John William Waterhouse simply called “Diogenes.” Around 2,500 years ago, Diogenes, like some of us, was a person interested in authenticity.

Diogenes was an interesting character, to say the least. There are many apocryphal stories that suggest his unusual behavior.

His beliefs and practices helped give rise to Cynicism, which became a philosophy that promoted the pursuit of truth over social conventions. This philosophy is different from the modern cynics who maintain a pessimistic view of life in their mistrust of everyone and everything. Traditional Cynicism strongly adhered to the pursuit of truth and virtue and upheld three types of freedom: self-sufficiency, freedom of will, and freedom of speech.

Diogenes became self-sufficient by practicing a type of asceticism in which he removed all unnecessary things from his life. For example, he watched a mouse run around without a care and decided that he would no longer participate in the cares of ordinary people. He saw children scoop water with their hands and eat lentils with bread and decided that he would no longer need a bowl or spoon. He even lived in a large wine cask after deciding that a finer dwelling was unnecessary.

According to the “Lives of the Eminent Philosophers” by the ancient Greek biographer Diogenes Laertius (not to be confused with his subject with the same given name), Diogenes “would often insist loudly that the gods had given to men the means of living easily, but this had been put out of sight, because we require honeyed cakes, unguents [ointments] and the like.” Diogenes thought that our pursuit of comfort, ironically, might prevent us from actually living comfortably.

Freedom of will included the pursuit of virtue and truth. Diogenes would approach people in broad daylight, put a lamp to their faces, and declare that he was looking for a true man.

Laertius claimed: “He would say that men strive in digging and kicking to outdo one another, but no one strives to become a good man and true. And he would wonder that the grammarians should investigate the ills of Odysseus, while they were ignorant of their own. Or that the musicians should tune the strings of the lyre, while leaving the dispositions of their own souls discordant; that the mathematicians should gaze at the sun and the moon, but overlook matters close at hand; that the orators should make a fuss about justice in their speeches, but never practice it; or that the avaricious should cry out against money, while inordinately fond of it.”

Freedom of speech included the ability to speak authentically without fear of punishment. Diogenes was known for saying whatever he wanted to whomever he wanted. He would quip at citizens, including the great philosopher Plato or the powerful leader Alexander the Great, with witty remarks.

Practicing wisdom, as opposed to merely thinking about it as many philosophers were prone to do, was Diogenes’s goal, and the true freedom of virtue was the foundation of that goal.

In 1882, Waterhouse painted an interesting picture of Diogenes. One of the first things I notice is that a banister diagonally divides the composition from upper right to lower left. We are immediately presented with two sides of the composition.

On the right side, Diogenes sits in his wine cask bedded with straw. He holds papers in his hand, and his back is turned to the happenings of the left side of the composition. He is relatively dirty and unkempt. Outside of his cask are onions, most likely his food for later, and the lantern he uses to search for truth.

From the left side of the composition, a young woman leans over the banister to get a closer look at Diogenes. Above her are two other young women, and they all are dressed very nicely. They hold umbrellas and fans to dispel the discomfort caused by the heat of the sun. On the steps are flowers, with which the leaning lady has adorned herself.

The banister leads our eye up to the top of the composition, where we can see more people in the distance. These people appear to enjoy similar luxuries as the three young women on the stairs: They possess attractive clothes and hold umbrellas to protect them from the sun; they seem to lounge in leisure.

The Courage of Authenticity

Diogenes has turned his back to the comforts of social conventions because they do not provide him with the truth he pursues. Comforts and the desires they instill represent a type of slavery.

Diogenes holds what I believe to be his doctrine in his hand. The onions and wine cask represent the self-sufficiency gained from his asceticism, and the lamp represents his search for truth. His pursuit of authenticity is joined with a sense of freedom.

I see the young ladies behind him as representing societal niceties. The fancy clothes, umbrellas, flowers, and leisure seem to represent a certain social status. Is the crowd at the top of the stairs their goal? And if so, does this pursuit interfere with their authenticity, with their freedom?

We have to be careful because resisting the crowd for its own sake can turn into following a different crowd, another way of distracting us from getting closer to who we truly are, another way of enslaving ourselves to chains of another’s making.

The young woman at the bottom of the stairs leans in closer to get a better look at Diogenes. In leaning closer, her interest breaks the boundary and casts her shadow on Diogenes. Is she also interested in authenticity and freedom absent at the top of the stairs? Or does she share in the amusement the young women above her seem to have toward Diogenes, a man who chooses a harder but ultimately more fulfilling path?

Sometimes, in order to turn toward our own authenticity, we have to break free from the pursuits of the crowd. Keeping up with the crowd comes with its own anxieties.

Authenticity is built on sincerity, on sincerely searching for truth irrespective of what others may think of us. It is a pursuit that takes courage, both in questioning ourselves to find the truth and in confronting a society that may consider such a pursuit crazy. How many of us possess such courage?