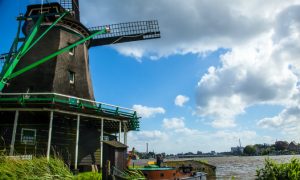 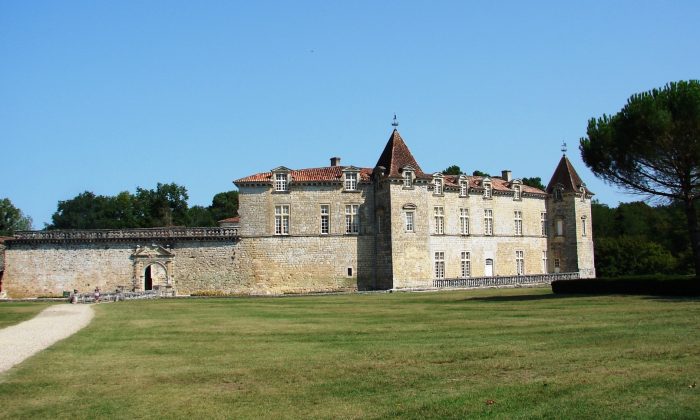 While on our Uniworld luxury river cruise in France, the “Bordeaux Vineyards & Chateaux” tour, we enjoyed an incredible day trip excursion to the Royal Castle of Cazeneuve, the former residence of King Henry IV and Queen Margot. The castle remains in the family of the Dukes of Sabran-Ponteves, and we met some of their descendants while dining there.

The castle is located in the heart of Aquitaine, near Bordeaux and Cadillac, between the wine regions of Bassin d’Arcachon and the Sauternes vineyards.

Departing from Bordeaux to cruise to Cadillac can be a bit of a problem. The ship needs to pass under the city’s renowned stone bridge, Pont de Pierre, and this can only be done at low tide. So, since it was high tide, we went by bus to the Royal Castle of Cazeneuve.

This turned out to be a bonus, because along the way, we traveled through the alluring Gironde countryside, a wine-lover’s paradise. We passed a plethora of flourishing vineyards and many picturesque chateaux and castles. It was truly a feast for the senses. Eventually we arrived at our destination in the small commune of Prechac.

Chateau Royal de Cazeneuve is shaped somewhat like an irregular polygon, and it’s strategically located on sheer cliffs at the confluence of two rivers along the Gorges de Ciron.

The old medieval fortress built on this site was founded in the 11th century. It was extended in the 14th century and restored in later centuries. The castle was frequented by many monarchs, including Edward I, Louis XIII, and Louis XIV.

The castle is surrounded by a moat (now dry) and was defended by two rectangular towers. Within its walls, there’s a large interior courtyard and a terrace that overlooks the moat. In the lower yard of the castle, I discovered medieval cellars where delectable wines are aged. There are several underground rooms, passageways, and caves as well.

As I walked through the wooded park on the grounds, I came across a fountain, a picnic area, an arboretum, a bamboo plantation, a pond, a waterfall, a mill, gardens, and Queen Margot’s famous cave in Queen Margot’s Wood.

The inside of the castle is beautifully restored with many period furnishings. In the dining room, there’s silverware and porcelain that bear the family coat of arms, a Louis XIV clock, and a statue of Henry IV at the age of 12. Above the door in the ground floor gallery is a bas-relief of Henry IV on horseback.

In the trophy gallery, I learned that the only foreign wildlife trophy on display were elk horns that had been brought back from Canada by an ancestor of the present owner.

In the kitchen, there are dripping pans used for spit-roasting or grilling and old cake molds over the stove, which I was told are still used by the family. I also checked out the well-appointed bedchambers of Henry IV, Queen Margot, and Louis XVI.

Dining at the Castle

As interesting as the tour of the castle and grounds were, the highlight for us was our on-site artisanal wine pairing meal. After all, it’s not every day that one gets the opportunity to dine in such a remarkable and historic setting—and the meal was indeed fit for a king and queen. Exquisite!

We began with an appetizer of smoked salmon with creamy horseradish emulsion and a sesame seed breadstick. This was followed by a main course of caramelized hen with mushroom pastry and asparagus tips. Then came the dessert of Peach Melba on a wine barrel stave with crunchy praline, roasted peaches, vanilla whipped cream, and chocolate drizzle. Each course was accompanied by an appropriate wine pairing, of course.

After the tour, we traveled by bus to meet our ship at Cadillac. The River Royale had awaited low tide and then made the trip on the Garonne River. An option for passengers was to simply stay on the ship and enjoy this trip while aboard, but I certainly wouldn’t have wanted to miss a visit to the Chateau Royal de Cazeneuve!

If you do this particular river cruise in the future, you’ll no longer be on the River Royale as it has been refurbished, redesigned, and transformed into a Super Ship: the S.S. Bon Voyage. The itinerary will be quite similar, but the trip will now be titled “Brilliant Bordeaux”—and the ship’s accommodations will be even more luxurious!