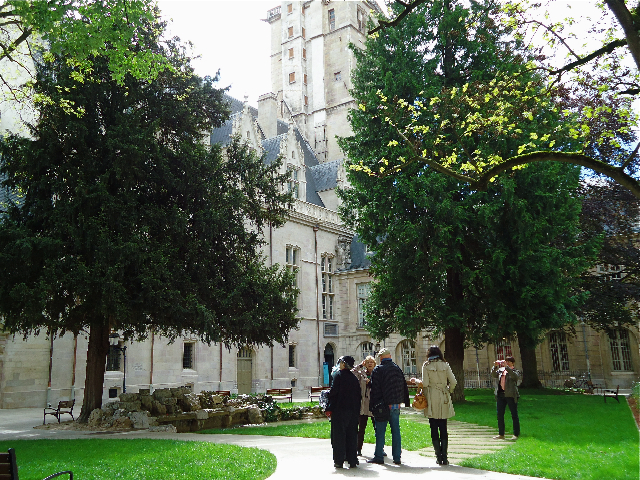 When the Musee des Beaux-Arts in Dijon, France closed its medieval galleries for renovation over three years ago, it used that opportunity to send a traveling exhibition around the world of sculpture unsurpassed in the art of late medieval Northern Europe.

For over a hundred years during the reigns of its four dukes from the middle of the 14th to the end of the 15th Century, Burgundy was the envy of Europe. At its lavish court, the duchy’s rich and extravagant rulers hired the best talent on the continent to create a priceless collection of art. Today Dijon’s Musee des Beaux-Arts displays much of that artistic heritage.

Since the 19th Century, the museum’s medieval galleries have been used to showcase the splendidly crafted tombs of Philip the Bold, first Duke of Burgundy (d.1404), his son and Burgundy’s second duke, John the Fearless (d.1419), and John’s wife Marguerite of Bavaria (d.1423).

On the tops of their mortuary installations lie recumbent portrait effigies of the two dukes and a duchess, extravagantly winged angels at their heads and protective gold-maned lions at their feet. Around the bottoms of both tombs run sculpted arcades like Gothic cloisters filled with mourners, each a 16-inch-high white alabaster figure, and each unique.

Intended to mimic the funeral processions of Burgundy’s powerful dukes, the figures are dressed in mourning clothes, some with hoods completely hiding their faces.

They represent both the clergy and the court and the exquisite detail of the carving was pioneered by Flemish sculptor Claus Sluter (c.1405-6). Called the ‘Michelangelo of the North’, Sluter produced 40 figures, 33 of which are still part of the tomb complex.

Sluter began working in Burgundy as the assistant to court sculptor Jean de Marville, and it was de Marville, who was originally given the commission for Philip’s memorial. But de Marville died shortly after and it fell to Sluter to create a monument worthy of his demanding patron.

Near the end of his career, Sluter brought his nephew Claus de Werve to court and together with Spanish sculptor Juan de la Huerta and a sculptor from Avignon named Antoine Le Moiturier, they produced a similar installation for John the Fearless. John had vastly admired Sluter’s work on his father’s tomb and de la Huerta and Le Moiturer created another in its likeness for him.

Originally all of this sculpture, together with kneeling life-sized statues of the first duke and his duchess and a statue of the Virgin Mary and Child, were installed in Philip’s dynastic mortuary chapel at the Cistercian monastery of Champmol just outside of his capital at Dijon.

But with the French Revolution and the closing of the monasteries, the mortuary sculptures, although fortunately preserved, were packed away. Several decades later it was decided to display the works in a Gothic hall in what had once been the palace of the dukes and would now become Dijon’s art museum.

When the principal rooms of the medieval galleries were closed for restoration in 2010, a group of 39 figures from the tomb of John the Fearless were sent on pilgrimage to cities like Dallas, Los Angeles, and Berlin, allowing those who had never traveled to Burgundy the opportunity to experience the exquisite beauty of the pieces.

For two-and-a-half years the miniature mourners have traveled the globe but this September, they and their fellows, Philip the Bold’s remaining mourners, will return to the arcades for which they were created.

In September 2013, Dijon’s Musee des Beaux-Arts will celebrate the re-opening of its renovated galleries in the palace where Burgundy’s dukes and their duchesses once held court. The world tour of their marble mourners has brought a new international emphasis on the sculptural brilliance of Claus Sluter and his fellow sculptors.

Susan James is a freelance writer based in Los Angeles. She has lived in India, the U.K., and Hawaii; and writes about travel, art, and culture.