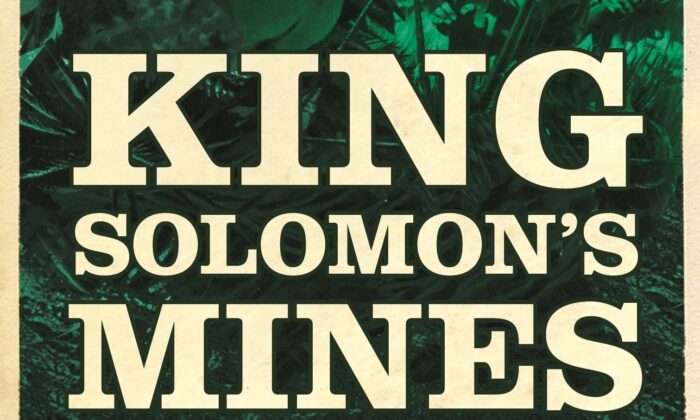 The most adventurous of tales.
Literature

When was the last time you read a book that got you started with a tattered map scratched out in blood? And imagine if that map led you on a perilous journey where scraps of an ominous legend brought you to a stony vault, which in turn descended to a lost treasure chamber, where presiding over an ancient table loomed a colossal skeletal figure of Death in all his grim glory, brandishing a spear.

You may wonder if Indiana Jones conducted you to such a place, but no. This is another world altogether, and it’s far more vibrant, even when it goes to the “Place of Death.”

If, by some happy fortune, you’ve read of such a thing in a tropical romance by perhaps Edgar Rice Burroughs or Rafael Sabatini (instead of seeing it in the movies), allow me to raise the stakes on the scene that I maintain has no equal: Seated at the above-mentioned table are huddled the misshapen bodies of a race of kings encased and pickled in translucent mineral cocoons created by stalactite drippings. And seated atop the table—not at the head, but on the top—behold, the headless body of the newly overthrown king, holding his own newly overthrown head in his cold, dead hands.

That head was hewn off in no less than a battle-axe duel with an English lord dressed in chain mail and an ostrich-plumed headdress, as the culminating event of an undiscovered African tribe’s civil war. And the shriveled, centuries-old witch who guided you there cackles and whispers to her cadaverous colleagues from ages past before revealing the secret doorway, where traps and curses and wealth await in darkness.

If you haven’t read “King Solomon’s Mines” by Henry Rider Haggard, you’ve probably never had any of these shocking and wonderful experiences because there’s nothing quite like it. The wonders it holds belong to it alone. What’s more, if you haven’t read “King Solomon’s Mines,” you may have never had the sudden, sweet experience of reading a book that reminds you of the joy of reading—a discovery as great as any treasure.

When Mr. Haggard read the new adventure story everyone was raving about in 1883, he was not as taken with it. His brother retorted, “I’d bet you could never write anything half as good.” It was a bet, and thus, Haggard set out to write an adventure story of his own that was better than “Treasure Island.” And, with reverence to Stevenson’s treasure-hunting masterpiece, Haggard produced a yarn in 1885 that certainly holds a candle to it, if not surpasses it. Indeed, so well-matched are these two classics, they were often included in a set as companion volumes, and they are very well suited.

Like “Treasure Island,” “King Solomon’s Mines” is one of those strange stories that gets swept up and lost in itself. With its stalwart, square-jawed characters led by the iconic Allan Quatermain—hunter, adventurer, gentleman, and so on—readers dive deep into the wild unknowns of South Africa in quest of a lost treasure buried in the legendary diamond mines of the biblical King Solomon. With safari hunts, tribal warfare, spells and hexes, myths and legends, treacherous terrain, booby traps, and towering ancient sculptures, there are few such transportive books, and this book does so with such unassuming matter-of-fact-ness even in the face of the fantastic.

In fact, “King Solomon’s Mines” is a book whose greatness lies in its oblivious fearlessness. It’s in every way self-confident and in no way self-conscious. It doesn’t realize how wonderful it is, unrestrained in its grandeur, an adventure of terrible innocence, full of cruelties and grotesqueries, but grimly unaware of the overarching romantic beauty it’s composing.

At the same time, the beauty of “King Solomon’s Mines” is burdened with the prejudices of its day—and in that sense, it hasn’t aged very well. But these cultural biases should not bury such a treasure from a new world of readers, no matter how modern their sensitivities. For at the same time, a Victorian innocence prevails in “King Solomon’s Mines,” even if it’s also a Victorian ignorance, that somehow absolves it of bigotry, especially as its errors are naturally, and again unconsciously, contradicted.

The book verges on misogyny, with the occasional demeaning comment about women, while its masculine heroes struggle through a world dominated by feminine powers and presences, barely surviving their trek through the mountains called “Sheba’s Breasts,” and being totally thwarted by an ancient witch-doctor named Gagool.

The story is tinged with a colonial racism while clearly honoring the blacks whose dignity is a rare thing in the so-called civilized world. Its characters seek the glory of lost treasure and the fame and fortune it promises, but instead find the less glittering but no less glorious treasure of comradeship instead.

“King Solomon’s Mines” is often uncouth and brutal, but at bottom it’s not a story of a treasure trove from a lost age, but a story of three gentlemen from a lost age. And among those gentlemen, the character of Allan Quatermain stands tall and unapologetic, further providing an apt instance of the power of literature to both reflect and affect the paradigms and perceptions of a people.

Quatermain is true to an ideology that recognizes a proper gentleman as one who holds honor and duty over all else because he is necessarily principled and not necessarily because he is paid. Arthur Conan Doyle’s Sherlock Holmes and John Buchan’s Richard Hannay from “The Thirty-Nine Steps” and Anthony Hope’s Rudolph Rassendyll from “The Prisoner of Zenda” are other examples of the true Victorian gentleman hero in this respect. Holmes, Hannay, Rassendyll, and Quatermain are amateur heroes, not professional heroes: men of the noble class who can afford a higher level of virtue than others and so are that much more virtuous, and they can spare the time for adventure and so are that much more adventurous.

The motivation of upholding a good show or fair play or common courtesy was motivation enough for Quatermain, and he took his payment in adventure (and for his trouble, as well). Quatermain and his comrades exemplify a category of hero, and in so doing, represent and reinforce their audience’s cultural convictions concerning what makes a man a gentleman. Though they are armed to the teeth and tough in war and weather, these gentlemen are genteel enough to speak gracefully, lend a sturdy hand, and wear a monocle no matter what the circumstances, because such behaviors and bearings are downright decent, whether in an English club or the plains of Kukuanaland. From Solomon’s Mines to his writing desk, the adventures and subsequent reminiscences of Allan Quatermain serve as icons of the fictional gentleman that served as a practical ideal for all factual gentlemen.

Readers at leisure should mind what they read for pleasure, for much of what can enrich our imaginations and our culture can be reduced to pulp by pulp fiction. The good news is that the dime novel can be worth its weight in gold and the thriller can be an edifier when written by the right writer. And that’s precisely where “King Solomon’s Mines” comes in, and precisely why it is well worth having at least a nodding acquaintance with the wonders it keeps hidden. So, pack your gear (a bookmark should suffice) and join the expedition.

Sean Fitzpatrick
Follow
Sean Fitzpatrick serves on the faculty of Gregory the Great Academy, a boarding school in Elmhurst, Pa., where he teaches humanities. His writings on education, literature, and culture have appeared in a number of journals, including Crisis Magazine, Catholic Exchange, and the Imaginative Conservative.