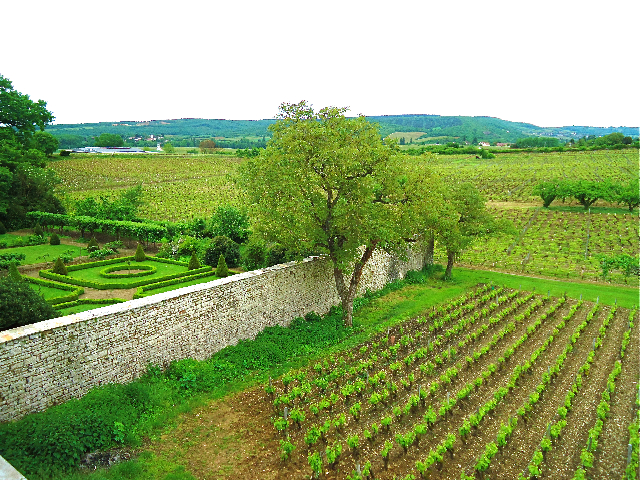 The Vineyards at Chateau de Chamirey in the town of Mercurey in the Burgundy Province of France. (Susan James)
Travel

The French province celebrated for wine and mustard
BY Susan James TIMEJune 14, 2013 PRINT

“You’ve got to try this,” an American voice insisted among the pots of mustard and bowls of breadsticks. I was in the Maille Mustard Shop in Dijon, capital of the French province of Burgundy, and exotic tastings were going on all around me. Japanese tourists were browsing along one wall while local citizens queued at the cash register.

Founded in 1747, this was the oldest and most prestigious place to buy the spicy condiment in a town whose name is synonymous with the stuff. Not only was standard flavor Dijon here, but mustard mixes with honey, with quince, with horseradish, and a hundred other ingredients in brightly labeled bottles lined the shelves. There were pump pots where you could create your own traditional jars complete with cork stoppers.

One little girl was eating mustard from tasting dishes like ice cream. As a typical tourist, I was looking for the hot dogs but my fellow shoppers were purists. “Have you seen the gingerbread?” the same voice asked. “It’s down the street.”

So down the street I headed to Mulot et Petitjean, a bakery where spice bread is an art. Catherine Petitjean is the ninth generation of her family to bake bread that traveled down the Silk Road to France in the Middle Ages via the saddlebags of camel caravans. She explained to a group of us how the original spice bread had come from China. The bread’s ability to keep for months as well as its sweetness endeared it to men traveling across hundreds of miles of arid desert to trade luxury goods between Europe and Asia.

It was no surprise that from mustard to spice bread, the French take their food very seriously. They discuss it incessantly, especially as they eat. They examine, analyze, and compare. Each aspect of a dish’s ingredients and cooking processes is worthy of respect and attention. Of course, in Burgundy, the talk always turns to wine. The wine caves and tasting rooms of the Domaine Drouhin in the historic town of Beaune were once the cellars of the 15th-century dukes of Burgundy and beneath them lies part of the Romano-Celtic city of Belen. It’s like entering an archaeological dig to descend layer by layer into their dim depths and wander from room to room filled with oak barrels and bottles rimmed with mold. “If you remove the wine, the barrel will die,” the great-granddaughter of Joseph Drouhin told me. As we sampled various bottles of red and white Burgundy, I asked her if she had played down here in the caves when she was little. “All the time, but there were too many places to hide,” she said, raising visions of small children still lurking in the corners waiting to be found.

Together with food and wine, you can’t travel very far in Burgundy without running into dukes. The last duke died in 1477 but for four generations, from 1363 to 1477, Burgundy’s rulers turned their duchy into the cultural hot spot of Europe. Money was no object and they gathered around them architects and artists, illuminators and poets. They cultivated fine wines and spent lavishly on their chateaux, their libraries, their art collections, and themselves. Their courtiers were as prolific and profligate as they, and one of the most famous, Nicolas Rolin, chancellor to the third duke, was the patron of both Flemish artists Jan van Eyck and Rogier van der Weyden. Rolin was encouraged by his devout wife Guigone de Salins, so the two built the stunning Hotel-Dieu in Beaune in 1443, a lavish hospital designed to care for the sick no matter their income.

Today the Hotel-Dieu is a Disney-like confection of a museum with a brightly colored tile roof typical of Burgundy. But, like spice bread, the design is a long ago gift from China. Fanciful iron finials cap dozens of dormer windows with tiny stone towers in the corners while underneath runs a pillared arcade. Inside rows of beds curtained in blood red-line the walls where nursing nuns once tended the sick. In the surgery, a trap door opens onto the Bouzaize River below where waste from the surgery was dumped. Ghastly medieval surgical implements that look like a torturer’s tools line the glass cases around the room. But the special treasure of the Hotel-Dieu is an exquisite altarpiece commissioned by Nicolas and Guigone in 1446 and painted by Rogier van der Weyden. In the central panel, Christ sits on a rainbow throne while below him the Angel Michael weighs all souls on the Day of Judgment. A masterwork of Flemish art, portraits of the Hotel’s founders appear on the back, a perpetual memorial to their charity.

The dukes of Burgundy, whom Rolin served, were no slouches in the memorial department either. In his capital of Dijon, Philip the Bold established a mortuary church for himself and his heirs at the Carthusian monastery of Champmol. Here he employed the greatest sculptor of the age, Claus Sluter, to create a monument worthy of a monarch.

On a cold, foggy afternoon, I arrived at Champmol to see Sluter’s work that I knew only from art books. Now a psychiatric hospital, no one else was around and the former monastery was very quiet. In the center of an enormous courtyard was a little glass gazebo and inside was Claus Sluter’s masterwork, the Well of Moses.

Circled by angels carved from limestone, six life-sized figures of kings and prophets from the Old Testament stood attached to a central pillar that had once supported a gigantic Crucifix, now destroyed. The entire installation rose from the green waters of the monastery wellhead. It was literally breathtaking.

Nearby, Philip’s mortuary church still stands, complete with life-sized figures of himself and his wife, Marguerite of Flanders. The tombs of Philip and his son, John the Fearless, with their priceless effigies and alabaster mourners were moved from here to the Musee des Beaux-Arts in Dijon after the French Revolution. A full-scale restoration of these is now underway and while the exquisite little mourning figures have been on a world tour of host museums, their original home at Champmol seems empty without them.

Very little of Sluter’s other work has survived. Marguerite of Flanders, first Duchess of Burgundy and one of Sluter’s patrons, was called the ugliest woman in Europe when she married Philip. But she was also highly intelligent and very rich. She rebuilt the Chateau de Germolles, on the road to Beaune, and employed Sluter to carve its decorations, as well as free-standing statues of herself and her husband.

Today Germolles is a privately owned museum full of dark corners and haunted rooms that contain the oldest surviving wall paintings in France. Marguerite stamped the chateau with her presence, even having the walls of her daughter-in-law’s boudoir decorated with recurring initials of ‘M’ and ‘P’ on a painted trompe l’oeil background meant to represent green velvet.

My guide pointed out the tiny alabaster figures carved by Sluter on the great mantelpiece in the hall, damaged during the Revolution and since restored. A knight was slaying a dragon, an angel guarded the fire while around them flowers, ribbons, and acanthus leaves flowed across the surface of the stone.

“We found the head of the angel in the rubbish of the wine cellar when we excavated it,” he told me. Even broken, the stone pulsed with life. Mustard may be synonymous with Dijon and sumptuous wines with Burgundy, but it was the dukes and their redoubtable duchesses who commissioned the memorials that centuries later make the province unique.

Susan James is a freelance writer based in Los Angeles. She has lived in India, the UK, and Hawaii. James writes about travel, art, and culture.