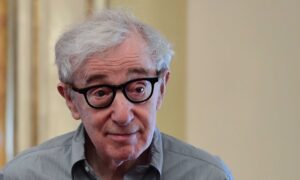 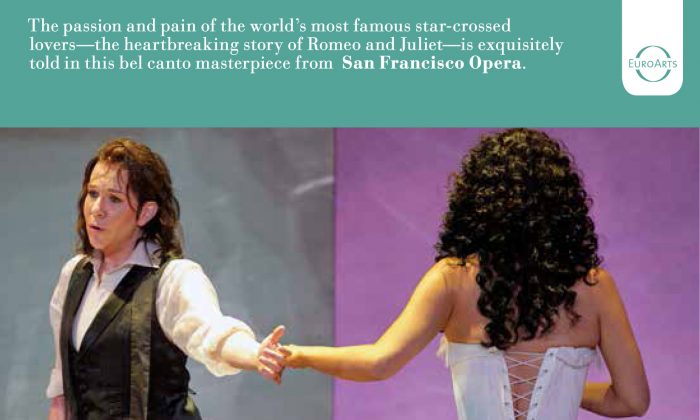 The EuroArts DVD of Vincenzo Bellini’s “I Capuleti e i Montecchi” (“The Capulets and the Montagues”), filmed at the War Memorial Opera House in San Francisco in 2012, stars two superb opera singers: mezzo-soprano Joyce DiDonato and soprano Nicole Cabell.

Bellini’s bel canto opera, with a libretto by Felice Romani, is a version of the Romeo and Juliet story, based on Italian sources. The plot differs in a number of respects from Shakespeare’s play.

Here, when the opera begins, Romeo (the leader of the Montagues) has already slain the son of Capellio (head of the Capulets). Romeo arrives at the Capulet palace in disguise, pretending to be an ambassador sent to make peace between the warring families. He proposes a marriage between himself and Giulietta (Juliet, Capellio’s daughter). Romeo’s offer is rejected by Capellio, who informs him that Giulietta has been promised to Tebaldo (Tybalt).

Romeo secretly meets with Giulietta and pleads with her to run away with him. She loves Romeo but declines out of family loyalty.

DiDonato and Cabell sing exquisitely both in their solos and in their scenes together.
The wedding festivities begin, but Romeo intends to disrupt the ceremony with the help of his army. The Capulets discover Romeo’s identity but he gets away. There is no Friar Lawrence in the Bellini opera. However, Lorenzo (a friend of the Capulets who has been trying to make peace between them and the Montagues) gives Giulietta a potion that will make her appear to be dead.

Romeo and Tebaldo start to duel but stop when they hear Giulietta’s funeral procession. Romeo places a rose on Giulietta’s tomb and, in despair, takes poison. Giulietta wakes up and, when she learns that her lover is dying, she decides to join him. He refuses her request for his dagger or poison, but heaven grants her wish and she expires beside Romeo. The Capulets enter the tomb and discover the two bodies. Capellio exclaims, “Killed! By whom” and the crowd replies, “By you, ruthless man.”

DiDonato plays the trouser role of Romeo (the opposite of the current production at the Metropolitan Opera of “La Donna del Lago” where she wears the dress and another woman portrays the male lover).

Bellini’s score (written in haste and incorporating some of his earlier music) contains memorable arias and duets. DiDonato and Cabell sing exquisitely both in their solos and in their scenes together. While DiDonato is better known, Cabell is a rising star. The 2005 winner of the BBC Singer of the World Competition in Cardiff, she certainly added to her reputation by this production of “I Capuleti e i Montecchi.”  It’s the first time she has performed in the opera, and it’s her debut with the San Francisco Opera.

While no one else in the cast matches the two stars either vocally or dramatically, tenor Saimir Pirgu provides excitement as Tebaldo and bass Eric Owens is a sturdy Capellio. The chorus under Ian Robertson and the orchestra conducted by Riccardo Frizza are first-rate.

I am less enthusiastic about this joint production by the San Francisco Opera and Munich’s Bayerische Staatsoper. The opera takes place in 14th century Verona, but the costumes by Christian Lacroix suggest gloomy 19th century England more than sunlit Italy. And Giulietta, while fetching—Cabell happens to be beautiful—never seems to be fully dressed.

The director, Vincent Boussard, makes some strange choices. For example, he has Giulietta sing while perched on top of a sink. The Blu-ray DVD is crystal clear and the sound quality is state-of-the-art. Extras include both stars speaking about their experience working on the production.

New Yorkers will get the chance to see DiDonato and Cabell on stage together at Carnegie Hall on March 18 at 8 p.m. This is part of DiDonato’s Perspectives series and will present bel canto arias, ensembles, and orchestral pieces.

DiDonato and Cabell will be joined by another American opera star, tenor Lawrence Brownlee, and they will be accompanied by the Philadelphia Orchestra conducted by Maurizio Benini. The program will include two arias from “I Capuleti e i Montecchi”: Giulietta’s aria expressing her love for Romeo, “Oh! quante volte,” and “Oh! mia Giulietta,” Romeo’s outpouring of grief when he confronts the lifeless body of Giulietta.