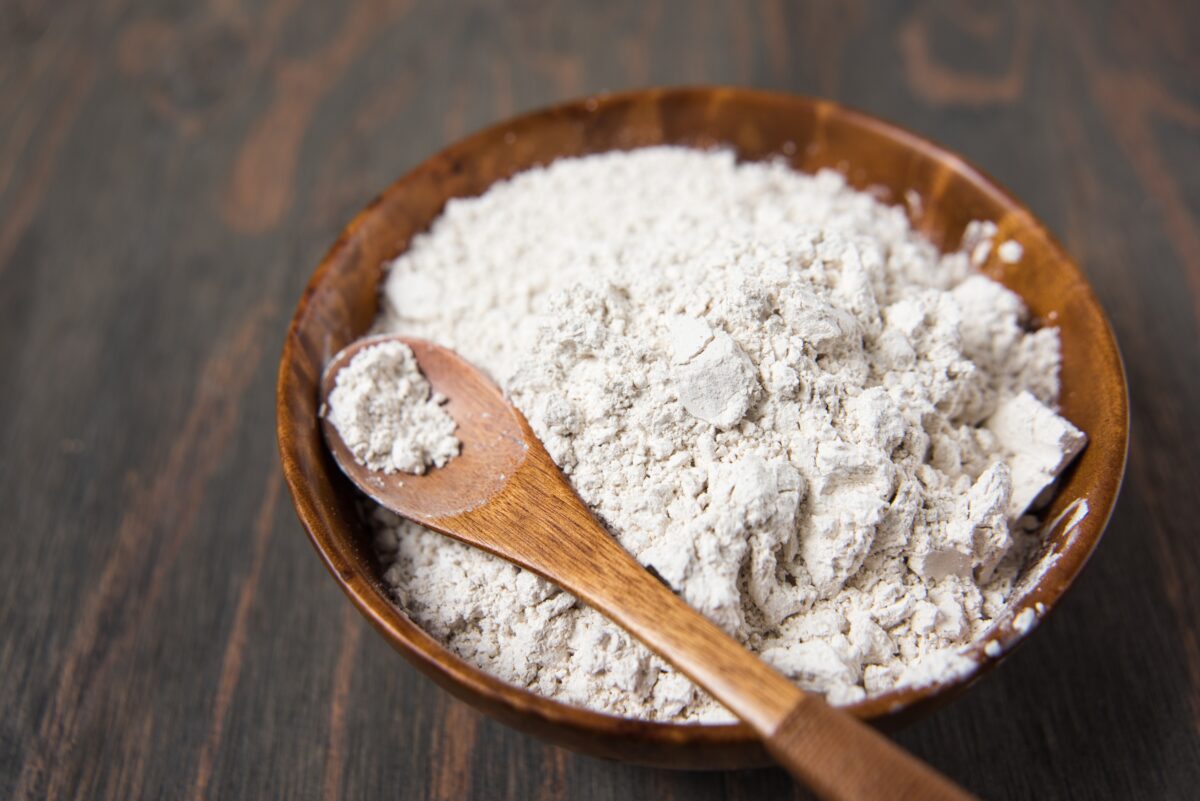 Diatomaceous earth (DE) can be used as a beauty product, an internal cleanser, or a deep revitalizer for the whole human body. Filter grade DE is great for filtering, but should under no circumstances be ingested or inhaled as it’s very dangerous for your health. (Anna Hoychuk/Shutterstock)
Style

Diatomaceous Earth: What Is It, How to Use It, Where to Find It

There it is—a bit of diatomaceous earth resting at the bottom of my water glass. It might not taste delicious, but its ability to cleanse my body and fill it with sought-after nutrients more than makes up for it.

Where Does DE Come From?

Diatomaceous earth is the waste product of unicellular algae. Over a 30 million year period, it has taken the form of white sedimentary rock that is typically harvested from the bottom of oceans, lakes, and rivers around the globe. After it is harvested and dried, DE is a fine, white dust.

In 1836-1837, Peter Kasten was the first to discover DE while drilling a well in Hausselberg Hill, which is located in Luneburg Heath, Germany. Until the first world war, most of the worldwide production of diatomaceous earth was from this region.

There are a few deposits here in the United-States. In Colorado and in Clark County, Nevada, there are deposits that are up to several hundred meters thick in places.

What Has Diatomaceous Earth Historically Been Used For?

Throughout its history, DE has been used in chemistry labs for various experiments and procedures when filtering very fine particles. Diatomaceous earth is also used in the filtering processes for drinking water. Fish tanks, swimming pools, beer, wine, sugar, syrups, and honey are all filtered in a medium containing DE.

The agriculture field has greatly benefited from this product, as it has been used as an insecticide and pesticide, and it has been used as a soil additive for growing potted plants. It serves as an anti-caking agent in grain storage and livestock feeds and has been used for its mild abrasive qualities in products like toothpaste, metal polishes, and facial scrubs.

What Is Diatomaceous Earth Predominantly Used for and Known for at the Present Time?

The usefulness of diatomaceous earth ranges from an internal one (as a natural medicine or supplement), to a solution you can apply in-and-around the house in order to protect yourself from unwanted vermin. DE, amazingly, can also be made into a beauty product with its special and unique properties highly effective against “aesthetic defects” which tend to appear as Father Time catches up with all of us. Here’s a quick list to showcase its numerous benefits:

#1: To Help the Body Function and Regenerate Itself Properly

DE is very rich in silica (85% of it), a trace mineral vital for bone health, artery health, and almost all vital organs like the liver. We used to be able to get our silica from nutrient-rich foods. Unfortunately, traditional farming methods have depleted the soil and the possibility of filling our needs through traditional I-eat-and-my-body’s-needs-will-be-met has become a somewhat utopian thing of the past. That’s why this white rock has become so fascinating to so many people. Silicon, calcium, sodium, magnesium, and iron are only a few of the trace-minerals that you’ll find in the white powder, all of which promote bone and muscle growth. People fighting high cholesterol will be satisfied, too, as it’s known to have a regulating effect on cholesterol levels.

#2: To Detox the Body and Kill Parasites

Within a few months of taking diatomaceous earth most will rid the body of  all parasites and most toxic metals as well.

#3: To Have an Attractive and Improved Physical Appearance

Another interesting facet of diatomaceous earth is that it can be used as a fascial mask and exfoliant.

As a matter of fact, when it comes to the skin, it can be used anywhere, and your skin will thank you for it. But it’s not just the skin that can benefit from diatomaceous earth. It’s also your teeth, your hair, your fingernails: all of which will become stronger and healthier over time.

The benefits of DE truly seem endless at times, and then again there’s still much more to cover. DE is useful against any type of insect infestation you might have in your house. Bugs adapt to conventional pesticides and become immune to their killing agents.  DE works by mechanical action, disrupting their waxy shell, making them more prone to eventual death by dehydration.

DE will also purify any room it has been applied in by detoxifying the ambient air.

Diatomaceous Earth Is Not Profitable to Pharmaceutical Companies

If this product is so great, why haven’t you heard about it before?

The reason most people remain unaware of this earth’s blessing is because of money. It’s as simple as that. Big business and influential pharmaceutical companies, can only profit from a product if they possess the exclusive rights to its merchandising. That certainly won’t happen with diatomaceous earth since the product comes directly from the earth’s soil.

As a result, DE is one of the hundreds of natural alternatives that get overlooked by doctors and pharmaceutical enterprises. People know about it because their friend, their relative, or someone they trust recommended it to them. If something is genuinely helpful to people, it will eventually make itself  known.

The Difference between Diatomaceous Earth and Any Other Alternative

What makes DE truly stand out though for its aficionados, and therefore makes it an essential addition to any person’s health cabinet, is its “silica-argument.”

Silica is the most important trace-element in human health.” – Dr. Barbara Hendel.

Life cannot exist without silica. Food grade DE is approximately 80-85% silica. When you take into account that most people are silica-deficient, although still holding over 7 grams of the mineral in their bodies (more than any other trace-element, even iron), you begin to understand its importance a bit better.

Issues/Illnesses Where Diatomaceous Earth Has Been Shown to Be Helpful

Such a powerful force of action begs the question: how can a product do so much without it hurting the organism?

For example, DE makes your body bug-free, not with a chemical but by physical action. The hundreds of particles that attack the insect are so small, so microscopic, they cause no harm whatsoever to people or pets. So it’s completely safe to ingest orally, as long as it’s food grade!

Filter grade DE is great for (like the name says it) filtering, but should under no circumstances be ingested or inhaled as it’s very dangerous for your health. This version of the white powder starts by being food grade DE with at about 85% amorphous silica, but then it’s heated to about 1000 degrees. The purpose of this is to make the exoskeletons of the diatoms much harder, which makes for improved filtering properties. The process causes the amorphous silica in DE to turn in to crystalline silica. It’s now called “calcined” diatomaceous earth and is 60% crystalline. The world health organization says DE needs to be less than 2% crystalline silica in order for it to be safe. You don’t want to ingest or inhale this form of DE (though it’s not good to inhale any DE). Also, in order to be considered food grade, the diatomaceous earth (food grade) has to have arsenic levels below 10mg/kg and lead levels below 10mg/kg.

What If I’m Taking Medication?

Reports have been extremely positive with or without medication. DE doesn’t seem to interact at all with pharmaceutical drugs, maybe in part because DE essentially operates through mechanical action only (by tabbing and mangling the little buggers).

Apparently, though, some people experience a rise in energy after taking the powder, a side-effect which has no major consequence, but it might interfere with a goodnight’s sleep. It is advised not to consume any diatomite before going to bed precisely for this reason.

So How to Use Diatomaceous Earth (Food Grade)

Note: drink a lot of water to help flush out toxic metals and dead parasites out of your system.

Step 1: Mix diatomaceous earth and some water in a bowl (roughly 1 part DE to 3 parts water).

Step 3: Whatever you have decided, spread the mixture across your forehead, your nose, your chin, and your cheeks.

Step 5: Finally, thoroughly wash your face with some water and a wash cloth. And that’s it, my friend. You should be good to go now—your skin, delicately exfoliated by the sweet action of diatomaceous earth.

How to Use Crawling Insect Control Diatomaceous Earth

You’ll need a hand-duster, power-duster, or other similar means for application.

This article was originally published on organiclifestylemagazine.com.

Claude Borel
Follow
Claude Borel is a training psychologist who is passionate about all aspects of health and understanding the subtle pathways to get to supreme health.
Website
SHARE
Friends Read FreeCopyFacebookTweet
You May Also Like