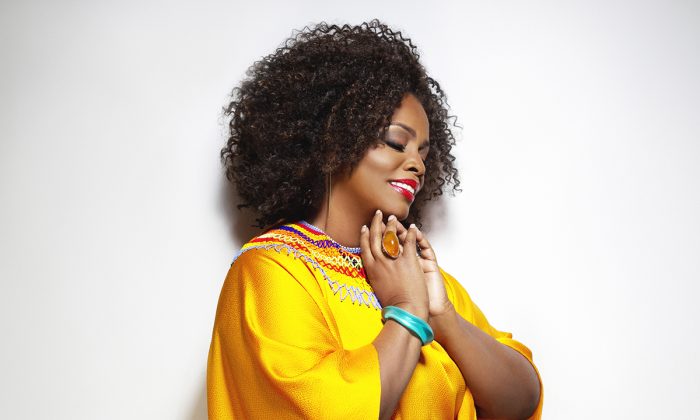 Singer performs at Jazz at Lincoln Center
By Barry Bassis

NEW YORK—Dianne Reeves is the preeminent jazz singer of our time. Whether in intimate clubs or concert halls, she always impresses with her plush voice, tremendous range, rhythmic flexibility, crisp diction, and her ability to invest each song with feeling.

She has won the Grammy for best jazz vocal album five times. She is the only singer to have won for three consecutive albums. In 2015, Reeves received an honorary doctorate from Juilliard.

Wynton Marsalis, who knows as much about jazz and its history as anyone, has said of Reeves, “She has one of the most powerful, purposeful, and accurate voices of this or any time.”

Proudly proclaiming that she is now 60 years old, the singer is in peak form. Her last album, “Beautiful Life” was her first album in five years, and she won her fifth Grammy for it in 2015.

After an opening instrumental by the group, Reeves appeared and sang George and Ira Gershwin’s ballad of romantic longing, “The Man I Love.” While she could perform it straight if she chose, the singer freely alters notes to make the piece sound fresh despite the countless recordings by other vocalists. Maret contributed a lovely harmonica solo.

Reeves changed the mood with her playful song, “Nine” about childhood games with her friends when they were young and innocent. While Reeves is not primarily known as a singer/songwriter, she has written a number of compelling pieces either by herself or with her band members.

Other compositions by Reeves at the concert included one celebrating the birth of Lubambo’s first grandchild and another in which she contributed lyrics to a piece Maret composed for his wife.

Miles Davis’s “All Blue” featured Reeves scatting and interpolating words about freedom and justice. Sergio Mendes’s introspective ballad, “Bridges,” was sensitively performed as a duet with guitarist Lubambo. For a change of pace, “That’s All,” was taken at a frenetic pace, with Reeves’s multi-octave scatting. Cole Porter’s “I Concentrate on You” had a samba beat.

A song without words led into a tribute to the late Queen of Salsa, Celia Cruz. By the end of the concert, Reeves had the audience singing along.

Never pass up the opportunity to catch this inspiring artist.

Coming up at Jazz at Lincoln Center

“Jazz of the ’50’s: Overflowing with Style” by Wynton Marsalis and the Jazz at Lincoln Center Orchestra on Feb. 17.

The lecture “The Science of Jazz: Music and the Structure of the Universe” (about the connection between jazz and science) on Feb.  23.

A salute to bandleader/pianist Eddie Palmieri on his 80th birthday, on March 3.