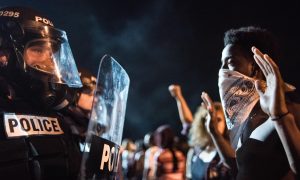 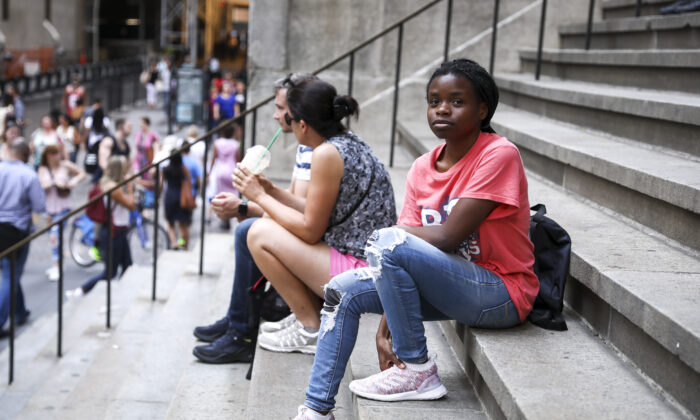 Diamond Gibson is only 23, but she has already long been thinking about legacy—about the future of those in her neighborhood and the well-being of not just her future children, but several generations on.

“Let’s make sure our kids’ kids are great, that they don’t have to go through what we’re going through,” Gibson said.

Gibson, who spent this past summer doing an internship on Capitol Hill, is outspoken about politics and frequently volunteers on campaigns. She’s a Gen Z upstart who gets told all the time she needs to run for Congress. While politics is her main avenue to educate the community she cares about, her primary passion is financial literacy. It’s what led her to politics.

Hope at the End of the Tunnel

Gibson grew up in a financially volatile situation, and she’d remember her friends getting the newest shoes and newest clothes, or getting a Benz or Audi for their 16th birthday, and that grew into pent-up anger.

“I had this backwards mindset. Instead of my saying, ‘Oh, let me work hard and get good grades in school because then one day I can provide for myself, I can have the nicest clothes and keep my hair and stuff done,’ the younger me was like, ‘Let me do bad in school, let me this at school’ basically try to get attention, trying to punish my parents,” Gibson said.

It was her aunt who taught her how counterproductive that was.

“My aunt let me know, that’s not hurting my parents because they’ve already lived a life,” Gibson said.

Because of her rough home life, Gibson had eventually moved in with her aunt.

“I was a troubled, troubled kid,” she said. “And she just wanted me to be encouraged, and for me to know, no matter where you come from, you can come from the poorest of the poor, as long as you apply yourself you can succeed in life.”

Her aunt then handed her a book by Ben Carson.

Gibson learned that Carson, the secretary of Housing and Urban Development, had been angry early in his life as well; he dealt with it through jazz and a library card that offered access to book after book.

“That helped me realize that life is going to happen, and this is how you can deal with it and overcome,” Gibson said. She came out focused on a new goal.

“To make sure that I never give up,” she said. “That gave me hope that there is light at the end of the tunnel.”

In high school, while people spent their summers partying, Gibson said she spent her time reading financial literacy books in her driveway.

She was determined that if she was bringing kids in the world, they would have the opportunity to be kids and grow up, not be crippled by financial worries.

When the 2016 elections rolled around, there was no question Gibson was supporting Carson. But then the race came down between Hillary Clinton and Donald Trump, and Gibson realized she had to learn more.

“On social media, because as the young generation that’s where we get our news, I kept seeing bad things about both of them,” Gibson said.

It sent her into a deep dive on what issues each candidate stood for, and she couldn’t support the criminal justice, economic, and abortion stances Clinton took. Then she learned that for decades, the black vote had bolstered the Democratic Party, yet once voted into office, the officials hadn’t actually improved black communities.

All the lessons Gibson was taking in financial literacy were things her family members and neighbors didn’t know either. And the values of faith, family, and freedom passed on in black communities, essentially conservative values, ran counter to many policies current Democrats ran on.

After that, there was no question of who she was voting for. More importantly, she wanted the people she loved to realize they could do better for themselves and see hope as well. Discussion of politics became her vehicle to help educate others.

“I really love my community, and I really want them to wake up and not be played as a victim,” Gibson said.

“I want them to realize, yes, we lived in these slums, but look at all the people that made it out and we can do it, too. All we have to do is change our mindset,” Gibson said.

Some shied away from the topic, saying politics wasn’t for ordinary people. She helped them see differently.

“That’s what keeps me waking up every day and speaking out, is speaking life into my community,” Gibson said. “Self-love programs, financial literacy programs, anything that I can work with to reach out in my community and help them elevate themselves.”

Gibson leverages social media, but also speaks very directly to her community. She walks the neighborhood and has conversations with people on the street. When she lived in Georgia, prior to moving to New York, she’d visit homeless shelters as well to teach people about programs that could help them.

“It might lead off from financial instability—or just life in general—some people feel hopelessness,” Gibson said. She tries to show them how to turn their mindset around and that education and growth are within their grasp. “And then when I come back and visit them they’re like, ‘Oh, have you done this [program]? I’m doing this, I’m telling my family.’ So there’s this ripple effect—once you tell one person the next person goes on, and on, and on.”

Gibson said she received some backlash when she first declared she was supporting Trump. Even friends and family called her horrible things, though the ones who really mattered and really knew her wanted to hear her reasoning.

But after what she suffered, growing up with no money, Gibson thought it laughable to let something like name-calling get her down now.

“What I’ve been through in life, it didn’t make me be like, ‘Oh, I need to shut up,’ or be in my room and cry,” she said. “It made me dig in deeper—they just don’t see and one day they will see.”

Many do eventually see the truth for what it is, and often come back to apologize to Gibson.

Now that Gibson is in New York, race is a factor in a way it wasn’t when she was in Georgia. People tell her the South is racist, but she says the racism she might’ve experienced in the South is nothing like what she experiences in liberal New York.

She’ll be out campaigning for any conservative candidate and hear things like, “You guys can’t campaign for him, you’re black, you’re colored people.”

“I get that a lot in New York,” Gibson said. Now that she’s more recognizable, she sometimes gets dirty looks from complete strangers, which baffles her, because she walks by Bernie Sanders supporters every day and manages to respect their right to believe anything they want to believe.

In Washington, her experience has been much more civil. She was on a Vice panel where progressives and conservatives debated feminism, and many staffers recognized her, and regardless of party affiliation said she did a good job expressing her point of view.

“Well, more of America could be like that,” she said.

The hostility, she points out, is really actually a sign of brainwashing.

Gibson gave an example of a time the aggression went beyond dirty looks. She had been holding a Trump 2020 flag when she noticed a man circling her. Gibson’s father was punched in the face by the man while trying to protect her.

“You literally lost your freedom because you’re triggered by a flag,” Gibson said. “Because you couldn’t handle your emotions.”

The assailant might have rent to pay or family waiting at home, but if you let yourself get triggered emotionally by just a flag and get locked up, there’s something wrong.

“You’re being mentally weak,” Gibson said. She tries to teach people not to blindly vote for a party, but to think for themselves and understand their values. “I try to teach them to be mentally strong, because people can just take advantage of you if you’re not mentally strong.”

For Gibson, interning for Rep. Ted Budd (R-N.C) was a lot of fun, and she hopes to spend another seven weeks interning on Capitol Hill next year if possible.

“I advise every young person to intern on Capitol Hill,” Gibson said. “You think you learned about government, you think that school taught you? No.”

She worked on bills and saw how legislators on both sides have to work together, how things really work versus what’s said in big committee meetings, how media spin plays out, and so on.

There is definitely a new movement in conservatism, and Gibson says Gen Z is something to watch. These are young people who are clear about their values and policy ideas from day one, having learned from people like Candace Owens and Brandon Tatum.

“A lot of us were searching in life, growing up, like where do I fit in? And we all came together and realize, we were never meant to fit in, we were meant to stand out and help lead something,” Gibson said.

The entrepreneurial spirit of her peers inspires her. Gibson says the new conservatives aren’t strictly Republican, there’s a mix of conservative Democrats, libertarians, and people who are just curious. Their efforts also aren’t strictly political.

“[Gen Z] have a lot, a lot of things that are going to be out there. We’re starting a lot of our own stuff to try to help out our community.”

“My dream is to have a financial literacy company to reach out to the less fortunate, the urban inner-city communities, and teach them about financial education,” Gibson said. She intends to leave her future children the sort of legacy that will enable them to leave their legacies to the next generation, and the next. “That’s my goal.”