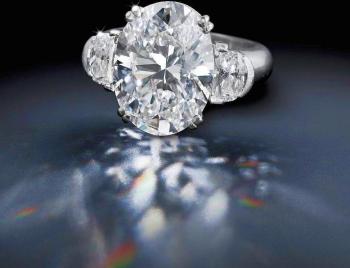 Founded in 1793, Bonhams is one of the world's oldest and largest auctioneers of fine art and antiques, according to its Web site. Bonhams holds viewings and auctions through its two major salerooms in London: New Bond Street, and Knightsbridge, and seven more throughout the United Kingdom. Sales are also held in Switzerland, France, Monaco, Australia, Hong Kong and Dubai. In November and earlier this month, sales were held in San Francisco and Los Angeles. Bonhams offers sales advice and valuation services in 50 specialist areas and has a global network of offices and regional representatives in 25 countries.

Among the diamonds set for auction on Dec. 16 in New York is a spectacular 10.17-carat diamond solitaire ring. An oval-shaped diamond is flanked by half-moon diamond shoulders. The ring is accompanied by a GIA report stating E color and VVS1 clarity. The piece is estimated at $550,000-650,000.

Also featured is a diamond necklace composed of an impressive 59 graduated pear-shaped diamonds. The necklace Ranges from "D" to "H" in color and "Internally Flawless" to "I" in clarity. With an estimated total diamond weight of 80.6 carats, it carries an estimate of $180,000-250,000.

An antique, retro aquamarine, diamond and sapphire bracelet by Mauboussin circa 1939 from Rio de Janeiro is estimated at $20,000-30,000. The piece centers a rectangular-cut, 35 carat aquamarine within a scrolling panel of round brilliant-cut diamonds with baguette-cut diamond detail. It is completed by a three-row bracelet of cone-shaped sapphire collets and signed "Mauboussin Paris," with French assay mark and mounted in 18 carat white gold and platinum.

Also notable is a rare Oscar Heyman & Brothers diamond, sapphire, and enamel "Harlequin" brooch. Made in 2001, this piece is one of only eight Harlequin brooches that Oscar Heyman created over the last 12 years. Designed as a masked figure playing a lute, the body is pavé-set throughout with round brilliant-cut diamonds and accented with marquise-shaped sapphires. Great attention to detail was rendered in this piece. The mask, hat, and shoes of the figure are made of black enamel and the white enamel face is accented by hand-painted red lips. With a maker's mark "no. 200791" and accompanied by a signed box, the brooch is estimated at $15,000-20,000.

A pair of exceptional fine diamond pendant earrings is also projected to draw bids. Each earring is designed as square-cut diamonds, weighing 3.23 and 3.01 carats, respectively. Each square-cut diamond suspends a kite-shaped diamond followed by a pear-shaped diamond, each weighing over 5.00 carats. The square surmounts are detachable, which enables the diamonds to be worn separately. Estimated at $200,000-250,000, they pose a great opportunity for the collector.

Viewings for the Bonhams’ Fine Jewelry sale will begin at the Madison Avenue galleries on Dec. 12 until the sale date of Dec. 16. The sale will take place at 12 p.m. EST and will be simulcast to the Bonhams’ San Francisco and Los Angeles galleries as well. Preceding the preview and auction, the Bonhams’ illustrated auction catalog for the sale will be online at www.bonhams.com/us.