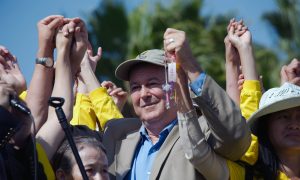 Fiberglass Sculpture (height: 57 inches) 2002, Kunlun Zhang. This imposing statue of a merciful Buddha is one piece in the Art of Zhen Shan Ren exhibition.
Arts & Culture

After seeing the Art of Zhen Shan Ren (Truthfulness Compassion Tolerance) International Exhibition in The Subscription Rooms in Stroud in the UK, therapist, healer and poet, Jay Ramsay wrote this poem:

White stone Buddha stands statuesque,
against a gold curtain of light: one palm raised
heart-aligned, the other, releasing down…
Divine balance: a human raised to an angel
standing liberated on a cloud—
a stream of immortals walking on water
Buddhas seated in spirit above the Speaker,
a woman in meditation with her curious child
doubled then tripled above, in her Higher Self
set against the stars. We as we are.

Two children reading, an old woman sewing…
But what is that child doing behind bars
with blood on his little shirt, chained legs behind him ?
What are the Chinese police doing
crashing in on a woman’s family evening ?
And that man in prison pyjamas tied to a chair
leaning back towards the only shaft of light there is
penetrating his cell all day ?

A doctor lifting out the bloodied pumping heart,
the patient’s throat craned back in agony ?
Numb, she holds her parents’ ashes in a pathetic box.
Pieta cradles the lifeless body of her son.
A woman stands arms stretched back up behind her,
five bricks hanging on a chain around her neck.

What is their crime, exactly ? Terrorism ? Anarchy ?
Spiritual practice. Can you believe it ?
This is the gulag of Falun Gong.

Once they thronged the streets, squares, parks
peacefully greeting the morning or evening
too potent for their paranoid government.
Thou shalt not believe in cultivation
if it threatens our fascist state.

Public trance. Police trance. Media trance.
What does it take to awaken
to the rule of Satan ? Backwards mastering…

Illuminati aliens calling themselves communists
crucifying their own people because
they hate the light. They hate the spirit
because it’s greater than they are
or can ever be. They hate God, they have no progeny
but the obedient machine…that makes them serene.

These are the fallen, who have forgotten everything
but how to fill the void with themselves.
This is the race that wants to rule the world.
And they stamp on parade, they creep like ice
indifferent to the tide, glacial as chemicals,
these are the ghouls that feast on us, feeling nothing
this is the planet of No Heart our children will inherit,
until we break the trance.

St. John, burn them in your Revelation
raise their cries like labour pains of love;
where the guards scream and scatter sideways
she levitates in her unbroken dream, above.

For more information on the author, contact him at www.jayramsay.co.uk.

To find out more on the Exhibition including its continuous global tour, visit: http://en.falunart.org