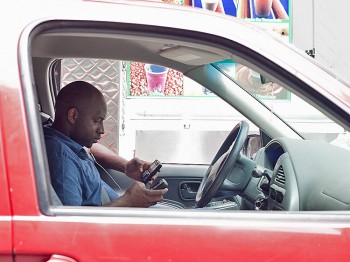 NEW YORK—Nathan Schwartz may now have sore thumbs, but he probably isn’t complaining, since he is now $50,000 richer after winning the LG National Texting Competition at the Roseland Ballroom on July 9.

Schwartz out-texted over 15,000 entrants, which included last year’s winner Morgan Pozgar. The second annual competition brought in hundreds of entrants for the New York regional, which preceded the national championship. 14-year-old William Glass won the regional, but Schwartz beat him on the way to the title.

Contestants first competed in a series of semifinal matches where they were grouped with several other contestants at a table. They were instructed to text a phrase that appeared on a screen to a specific number, and the first one from the table who sent an error-free text the fastest would move on to the next level. The process was repeated until a regional finalist was crowned. Glass took the regional and represented New York in the national text-off, which moved to the main stage.

The national competition featured contestants that had won various regional competitions and who were flown in to compete for the top prize. In the winner-take-all final round, Schwartz texted the long, hard-to-text phrase which included the alphabet with random letters capitalized to the judges first.

When Schwartz’s phone rang, which signified that he had won, he started jumping on-stage amid the confetti raining down on him. “When I won I just wanted to scream,” he said, calling his mom almost immediately after he had won. “I swear, I won!” he shouted into the phone amongst the cheers.

“I’m going to buy my mom something really nice,” he said when he got off the phone. When asked what else he would do with the prize money, he replied, “I’ll use it to finish off college, and my girlfriend’s birthday is this weekend.”

Schwartz, not surprisingly, was dazed by the win. “I can’t really feel my thumbs,” he said, “and I have a headache for some reason.”