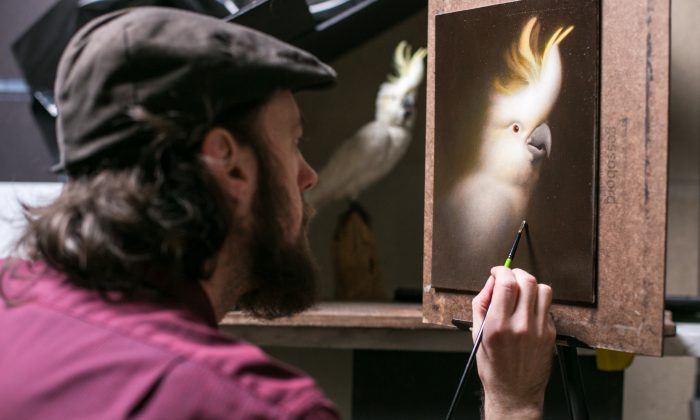 A glimpse into the atelier art movement
By Milene Fernandez
Print

NEW YORK—Up close the lemons look fuzzy. They emanate reflected light, glowing softly. Stepping back from the painting, the contours become sharper, the citrus flesh starts to glisten. At arms length, the lemons jut out from the canvas, still glowing, asserting a peaceful presence. Looking at a Devin Cecil-Wishing painting feels like a magical experience.

He can make something as simple as lemons look dreamy. The things he chooses to paint are not as important as what transpires among those things. “I’m more interested in the way that light is falling and reflecting, in getting the feel of that really thick tangible substance of light in there,” he said at Grand Central Atelier (GCA), where he teaches and paints.

As viewers we can enjoy the fruits of Cecil-Wishing’s efforts—the culmination of years of training, tons of perseverance, and a marathon imaginative process.

“When I look at my still life set up, I like to pretend that it is inside an aquarium full of water, so that if I was a little fish I could swim through all of that space around the things. I want the air around the objects to feel like a real substance,” he said. He also compared the way he perceives light to how big ocean waves crash onto rocky cliffs and splash back. “The light is doing the same thing, it’s just slamming down onto there and bouncing all over the place. It’s like this sticky, bouncy kind of substance,” he said.

In tandem with representing light, another fundamental skill set that Cecil-Wishing and other GCA painters are especially known for is their ability to think sculpturally to create images that look very three dimensional in the picture plane.

While students at GCA inspire and learn from each other as they go through the same rigorous core program, the atelier is based on the master-and-apprentice-style of education of the Beaux Arts atelier tradition of 19th century Paris.

When Cecil-Wishing first discovered the works of the founder of GCA, Jacob Collins, he was struck. He recalled thinking, “Whoever this guy is, knows something that I don’t, and I want to learn whatever it is that makes his work so incredible,” he said. “There’s some knowledge there. It is hard when you don’t have whatever that knowledge is, because you don’t know what you don’t know. There is just something that he is doing that is fundamentally different,” he added.

A Path of Dedication

Cecil-Wishing, now 35, grew up in what he called a very DIY household and in the little-known neighborhood of Little Hollywood in San Francisco. “We were always making things, going out fishing, gardening, baking bread, doing all this really cool stuff,” he said, echoing an attitude reminiscent of American pioneers.

“There is something fundamentally satisfying about making something yourself that you don’t get from consuming something,” he said.

His initial interest in the visual arts started with cartoons when he was 13. He attended an arts high school, which focused on realism, but ironically he was not interested in that at the time. Then when he attended the California College of Arts and Crafts, at that point he really did want to learn how to draw and paint well technically, but the college mostly focused on conceptual and abstract art, so he graduated with a degree in illustration instead of fine art.

“I’m always sort of doing the opposite of what is going on for some reason,” he said chuckling. Eventually, his dance of opposition between wishes and circumstances reconciled.

He started emulating the work of the New Zealand wildlife painter, Raymond Harris Ching and increasingly wanted to paint more like the old masters—admiring Rembrandt, Rubens, and several Dutch and Flemish baroque still-life painters. His trip to Amsterdam during the celebration of Rembrandt’s 400th birthday in 2006, cemented that deep interest.

When he had a senior show of his work at a little street front gallery, he said a random guy who just walked in off the street told him that he should meet the artist, David Hardy and showed him some slides.

Curious to see Hardy’s work, Cecil-Wishing met with the artist over dinner and asked him questions about painting. When Hardy asked him why he was interested in his school, Cecil-Wishing had no idea Hardy ran the Atelier School of Classical Realism. In fact, he didn’t know anything about ateliers. That evening he sat in on Hardy’s class. He remembered thinking, “This is awesome. It’s what I’ve been trying to do.”

Cecil-Wishing hadn’t thought of searching for ateliers on the Internet because of his general reaction against computers at the time. “When the dot-com boom happened, all of a sudden it was virtually impossible to live in our city. At first I sort of associated it with the ruination of my home town,” he said laughing.

“I’m sort of ridiculous sometimes,” he said. He’s over it now and glad to have his own website and a smart phone, which he didn’t have ten years ago.

He studied with Hardy in the small atelier in Oakland in the evenings, while he taught art classes to low-income high school students in San Francisco during the day. He also had a work-study deal. Once a week he would go to the studio or to Hardy’s house to do various chores—vacuum, wash the dogs, or take care of the garden. “It actually wound up being really cool because I had more of a chance to talk to him and I learned a lot during those times,” Cecil-Wishing said.

He recalled seeing a card of a Jacob Collins show pinned to the studio’s bulletin board one day. “I thought, who is this guy?” said Cecil-Wishing in a whisper.

About three years into studying at Hardy’s atelier, a fellow artist casually said she was going to New York to study under Collins. Astounded, Cecil-Wishing asked her, “What do you mean? He teaches?!” Right away he resolved to move to New York as well, and he did so six months after a short visit.

If You Can Make It There

“When I was a student here, I was sleeping three hours a night, working kind of miserable jobs, but I also had one apartment disaster after another,” he said.

For five years, while studying full time, he also worked full time at places like Starbucks, Whole Foods, and a ceramics workshop. On top of that, he had to move seven times during his first three years in the city, for various reasons, like a bedbug infestation or a crazy landlord going into his room in the middle of the night.

The worst apartment disaster he experienced happened after just two weeks of moving into a basement apartment in Jersey City. Storms leading up to hurricane Irene flooded his entire apartment with a foot of sewage water. The landlord did not respond to his calls. He had just bought new furniture and most of his belongings were wrecked. He managed to save his artwork, guitar, and other belongings, which he propped on top of his table.

“You couldn’t go in there without gagging,” he said. He ended up sleeping on the floor of Penn Station that night. He said he had a different apartment disaster experience related to hurricane Sandy, and just shook his head smiling.

“All I wanted to do was to go into the studio and focus on painting, but I was constantly in this state of emergency, worrying about finding a place to live. I have to pack, I have to unpack, I have to look for a job, I have to sleep! It was tough,” he said.

Despite the hardship, he admitted, “Deep down I’m secretly a pretty optimistic guy. … I definitely have my mom’s dark Irish sense of humor, which is always a cornerstone of getting through things for me. I definitely laugh about the bad things, and ultimately they make great stories some day—you just have to be patient,” he said smiling.

Now Cecil-Wishing’s living situation is stable, and he’s living in a very nice loft in SoHo with a friend. “After all of my really bad apartment luck, I finally got some really good luck,” he said smiling.

Now Cecil-Wishing’s biggest challenge is time. There is so much that he wants to do. He enjoys teaching cast drawing and painting, which is part of the core program at the GCA, as well as a painting class on color and light.

He’s currently in the middle of creating a video workshop series. He already has 180 hours of video that he will edit down to 40 minutes for the first episode.

He’s preparing to give a workshop in Germany this summer and hopes to give more workshops abroad as he has done in the past in Cape Town, South Africa. In the interim, he plans to post a few shorter video lessons of little tips and tricks on his website.

All the while, he continues to build a body of work to show at a gallery. His painting continues to be an ongoing process of experimentation.

“Most people generally learn in these leaps and plateaus. Even though I’m constantly plugging away, growth is not constant. I hit these breaking points where windows open up. I get to a point where I think, ‘Oh, I’ve got it, this is it,’ and then as I continue to work I start having some doubts or questions, and I’m not satisfied. Usually I get really frustrated before one of those big breakthroughs and then it hits again, and I think, ‘No this is it, now I get it.’ It is constantly like that,” he said.