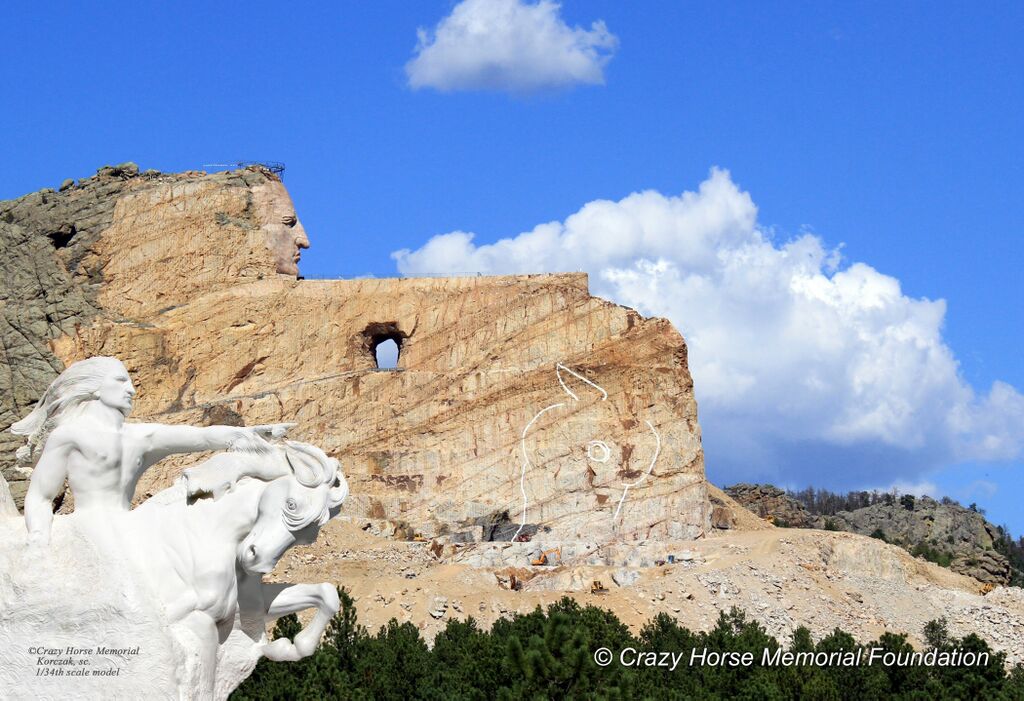 Crazy Horse Memorial circa 2014. To put the scale of the memorial in perspective, Mount Rushmore is roughly the size of Crazy Horse’s face. The outstretched arm is longer than the length of a football field. The next phase of the carving is the hand above the horse’s head. (Crazy Horse Memorial Foundation)
Arts & Culture

Amid the rolling granite peaks of the Black Hills in South Dakota, the Crazy Horse Memorial stands regally, inviting visitors to gape at the sheer scale of the largest sculpture in the world. Caterpillars and the heavy machinery used to block out the shape of the steely figure hint at the enormity of the task, as they labor along the winding paths traveling up the mountain.

For those who conceived and oversaw the building of the Crazy Horse Memorial, it has been a calling for them. Their vision extended beyond their lives and across generations. It extended beyond emotional and physical hardship.

There was really no option for the site of the memorial but the Black Hills; it was the most sacred place for many of the Plains tribes and would become a focal point for future generations to preserve Native American culture and honor its history through education.

In the 1940s, most Native Americans were forced to live on reservations in squalid conditions. The popular circus shows of Wild Bill Hickok of generations prior portrayed Native Americans as barbaric and uncompromising. Their culture was misinterpreted, manipulated, and on the verge of extinction.

Standing Bear wanted Native Americans to know their own history and to know that it offered much to take pride in.

A letter written by a Native American leader to an upstart sculptor asked him to carve a statue. It states, “My fellow chiefs and I would like to know the red man has great heroes, also.” The author of the letter was Standing Bear, the interpreter and educator for the Lakota tribe. Standing Bear wanted Native Americans to know their own history and to know that it offered much to take pride in.

At a young age, Standing Bear had been taken to one of many off-reservation schools known as the Carlisle schools for Native American children. In the 19th century, children were often forcibly removed from their families in order to gain a Western education. Standing Bear, the future hereditary chief of the Brulé, which occupied the Teton area of Wyoming, was no exception.

While at the Carlisle school, Standing Bear was forbidden to speak his native language. The children attending the schools were also forced to cut their hair short, change their native names, and were forbidden to display any kind of behavior associated with their origins.

It was at the Carlisle school, however, that Standing Bear gained insight into American culture and its way of viewing the world. He would use that education to work within the framework of modern America to preserve his own culture and advocate for Native Americans across North America.

Sculptor Ziolkowski was born on Sept. 6, the same day that Crazy Horse had died 62 years earlier.

After doing their homework, Chief Standing Bear and other tribal elders searched for a qualified candidate to bring this dream to life. Standing Bear came across news of a sculptor, Korczak Ziolkowski, who won first prize at the 1939 World’s Fair. Ziolkowski told the humble chief that he would carve the statue. It would be of the great leader Crazy Horse.

Standing Bear and the tribal elders were convinced that Ziolkowski was destined to carve the Crazy Horse Memorial as he was born on Sept. 6, the same day that Crazy Horse had died 62 years earlier.

Crazy Horse had often been a recluse as a child. His wavy brown hair and light skin set him in sharp contrast to the other Lakota around him. He was often taunted for his appearance, but to the amazement of the tribe adults, he was barely ruffled by the teasing from the other children.

As an adult, Crazy Horse became part of a society within the Lakota known as the Heyoka. They were often the medicine men. With everything they did, they did it backward—the opposite of what would be normal. Whatever they did, they strove for the highest virtue. For example, around the campfire after a battle, men would partake in a ritual, recounting their glories. Crazy Horse, however, was nowhere to be found.

Crazy Horse, as a Heyoka, did not try to pursue fame or wealth; instead, he often gave his spoils of war and his possessions to those of his tribe in need.

He often preferred to be alone in the wilderness with his thoughts. When he was perplexed by a difficult situation, he would disappear for days at a time to brood.

There was much to brood about. The U.S. government broke one treaty after another as settlers poured into the Lakota lands, forever altering their way of life. The United States had proceeded to wage a genocidal campaign against the tribes of the Great Plains and shattered any hope of a peaceful coexistence between the two parties.

Sifting through battle with supernatural ease, Crazy Horse gained a following among the warriors of his tribe. He had many visions that guided him through his short life, which the elders took to be very significant. Some of the visions were about the future, beyond the lives of all who were there to hear Crazy Horse recount them.

Crazy Horse was destined to be a leader, and as an exemplary man, his humility inspired generations after him.

Before his death, Crazy Horse prophetically stated that he would return to his people in stone. It was naturally fitting that Crazy Horse would become the subject of the mountain carving.

Ziolkowski and Standing Bear had originally wanted to carve only the top portion of the mountain.

Ziolkowski and Standing Bear had originally wanted to carve only the top portion of the mountain. A fissure in the granite on the prospective carving site altered their plans. They thought “go big or go home.” The entire mountain would be utilized for the Crazy Horse Memorial in what might be the most ambitious and far-reaching monument of our time.

The finished carving will be accompanied by a poem written by Korczak Ziolkowski, which reads:

When the course of history has been told
Let these truths here carved be known:
Conscience dictates civilizations live
And duty ours to place before the world,
A chronicle which will long endure.
For like all things under us and beyond
Inevitably we must pass into oblivion.
This land of refuge to the stranger
Was ours for countless eons before:
Civilizations majestic and mighty.
Our gifts were many which we shared
And gratitude for them was known.
But later, given my oppressed ones
Were murder, rape, and sanguine war.
Looking east from whence invaders came,
Greedy usurpers of our heritage.
For us the past is in our hearts,
The future never to be fulfilled.
To you I give this granite epic
For your descendants to always know –
“My lands are where my dead lie buried.”

Tim Gebhart is an artist living in Clackamas, Oregon. 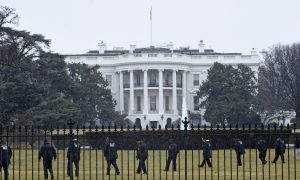