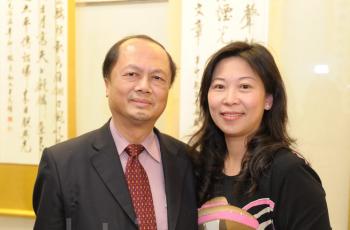 By Epoch Times Staff
Print
TAIPEI, Taiwan—Shen Yun Performing Arts, the world’s premier classical Chinese dance and music company, has caused a great sensation in Taiwan and has attracted the elite of the business community in recent years. As though a great gathering for medical authorities in Taiwan, the Shen Yun performance on April 2 at National Dr. Sun Yat-sen Memorial Hall drew many superintendents of major hospitals to attend. Among them was Dr. Lin Yuh-Feng, Deputy Superintendent of Taipei Medical University-Shuang Ho Hospital. Dr. Lin was accompanied by his wife. After the show the couple exclaimed, “Fabulous! It is truly an extraordinary show.”

Dr. and Mrs. Lin were impressed by Shen Yun’s dynamic backdrop, which animated the performance and made them feel as though they were personally on the scene. Dr. Lin said, “Using the dynamic backdrop as the background is very special. Its collocation with actors’ performances is done so well that the scene feels that actors can travel in and out of the background freely.”

He felt intrigued by all of the programs, saying “I like all of them. Each has its own characteristics.” He was particularly impressed by Herding on the Grassland, a program which took him to experience the unbridled wilderness of Mongolia's grasslands.

Mrs. Lin enjoyed The Monkey King Outwits Pigsy. The program presented the story in the epic novel Journey to the West. Dr. and Mrs. smiled and said, “Harmonizing with the animation on the dynamic backdrop, the Pigsy flies down from the heaven. The collocation has been excellent!” The couple considered Shen Yun had reached the acme of perfection.

The couple also commented on the Shen Yun International Company Orchestra, saying that its music performance had provided “excellent accompaniment” to the show. Dr. and Mrs. Lin highly recognized Shen Yun’s dedication to the show because Shen Yun’s program contents, backdrop, costumes and music accompaniment are all the artists’ original creations.

Dr. Lin is a noted kidney authority in Taiwan. He is the incumbent deputy superintendent of Shuang Ho Hospital operated by Taipei Medical University. He is also a professor of internal medicine at Graduate Institute of Clinical Medicine, Taipei Medical University and at National Defense Medical Center, a researcher at Center for Clinical Toxicology, University of Virginia, and the director-general of Taiwan Society of Nephrology.