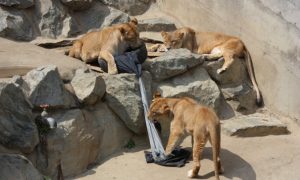 Denim as You Know It, and as You Don’t

Woven into the fiber of every pair of jeans is the idea of the individual against all odds, the unique, irreverent and adventurous urban hero. Buy yourself a pair and you will be one too.

Throughout the 20th century the Lone Ranger from the American western drama television series by the same name etched himself into our collective psyche. He continued to metamorphose into the rebel with-just-about-every-cause in the 1953 movie “The Wild One” starring Marlon Brando, and settled into the lasso-wielding Marlboro Man. The Lone Ranger may not have worn jeans, but he was the one referenced by Marlboro in its widespread advertising campaign—and Marlboro Man always wore denim. Ditto for “The Wild One.”

The exhibition Denim: Fashion’s Frontier, showing currently at The Museum at FIT (Fashion Institute of Technology) comes at a time when denim is enjoying a resurgence in popularity. Designers are relishing the opportunity to use it in their latest collections, which, not at all coincidentally, hark back to 1970s styles.

But despite this revival, an initial walk through the exhibition from beginning to end, leaves one with the undeniable feeling that this most ubiquitous fabric has been used to reference a limited aesthetic the closer we get to 2015. When it comes to the way we have been wearing denim since the 19th century, a look back through the decades reveals a few surprises.

Before the Five-Pocket Riveted Jean

“Denim has a rich history, particularly the further one goes back in time, yet our contemporary view of denim is often very limited to the five-pocket riveted jean, or this one type of jacket as introduced by Levis,” said assistant curator of costume and exhibition organizer Emma McClendon.

Anthropologists claim that on any given day, half the world’s population is in jeans.

The over 70 objects in the exhibition show that in the early and middle 1900s denim was used for womenswear, menswear, sailor ensembles, and prisoner uniforms—well beyond the iconic blue jean.

Points in case are some of the ensembles displayed in the first part of the exhibition such as the 1915 walking suit in white denim with charcoal stripes, or the “Popover” dress from 1942 by renowned American designer Claire McCardell, which came with a matching oven mitt and was a huge success at the time.

Most intriguing is the gray denim and linen prisoner uniform dated 1913—intriguing because were it not for the label text, one would automatically assume that it is a Comme des Garçons outfit.

McClendon explained that what struck her when looking at its construction was how well it was made even by today’s standards. “It is rudimentary by 1913 standards, but by today’s standards it is a very well made garment,” she said also pointing out that the exhibition label had to be changed to specify “Prisoner uniform” because people seeing it initially, assumed that it was a prison guard’s uniform.

As a fabric, denim has long changed from its strict definition of being a warp-face twill weave. In fact, today one would be hard-pressed to find a typical denim fabric. It is made on countless types of machines, in various types of fibers, color pigments, as well as weave structures, yet they are all related to that original denim by association. But despite this promising variety, designers’ interest in denim is often limited to its cultural connotations.

The 20th century was the century of denim, according to McClendon, given the fact that it was the most obvious emblem of how dress codes were breaking down during the ’70s. It was the decade when denim was starting to infiltrate every level of the fashion system.

According to McClendon, jeans are touted as being so personalized in the way that they conform to one’s body that the FBI developed a way of identifying people based on the wear patterns on their jeans.

The raw denim movement is all about personalizing jeans by wearing and washing them to the point that they visibly display the unique characteristics of the wearer.

“But it is also the most homogenizing and equalizing garment and textile in the world. Anthropologists claim that on any given day, half the world’s population is in jeans,” said McClendon.

The paradox is inescapable. But it doesn’t end here.

Women have come to don the garb of the urban hero while seeking the look of the 1970s sculpted bottom. To this day women persist in pouring themselves into blue jeans that can barely contain the curves of those who are larger than a size 0. Yet McClendon argues that if the blue jean came close to being a corset, it was in the late 1970s when they had no stretch and were meant to be worn so tight that stores started to bring in sofas to lie down on so that customers could get themselves into their favorite jeans. The culprits—those Calvin Kleins and Jordaches of the late 1970s and early 1980s are also part of the exhibition.

Mclendon recounts the best explanation of this phenomenon that she ever heard coming from an interview with designer Isaac Mizrahi who said that the idea of the good looking bottom in jeans is so far reaching that squeezing your own self into jeans is like “putting air quotes around it.” Apparently, subliminally, by associating ourselves with that iconic image, we are aligning ourselves with that aesthetic, happily disregarding any objective evidence to the contrary.

So there it is: we have come to see ourselves through jeans-colored glasses.

The current exhibition seeks to remove our blinkers and broaden our horizons so that we can see the denim beyond the forest of jeans again.