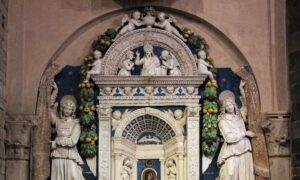 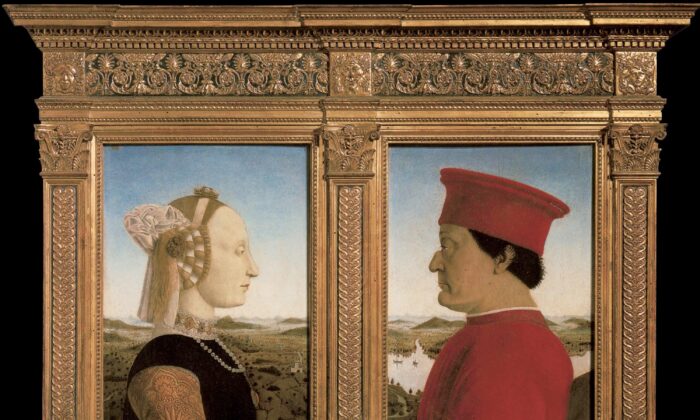 Delving Into an Incomparable Work of Renaissance Portraiture 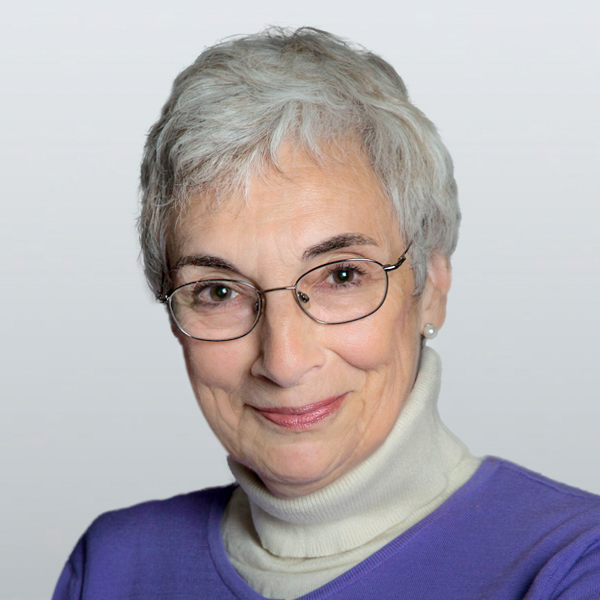 The double portraits of Federico da Montefeltro and Battista Sforza by Piero della Francesca in the Uffizi Gallery, Florence, is an intriguing masterpiece by one of the greatest painters of the Italian Renaissance.

Most familiar to art lovers are its superb profile portraits of two notable early Renaissance personages. But it also comprises, on the back of the portrait panels, uniquely captivating allegorical scenes, representing each of them in a triumphal procession, above a simulated parapet bearing a Latin inscription.

Though now displayed in a rigid modern frame, the work was originally designed as a portable folding diptych (two-panel painting), hinged to fold with the allegorical scenes on the outside. Thus it was no doubt intended for intimate personal reflection rather than for public display.

Despite the diptych’s artistic quality and distinctive content, no documents have as yet shed light on its genesis. Since Federico was a highly erudite patron of the arts, and Piero is known to have spent time in Urbino during the period leading up to the likely date of the diptych, it has generally been assumed that Federico commissioned the work himself.

In-depth consideration of the work’s imagery and inscriptions in the light of key biographical information about the subjects casts serious doubt on that long-standing assumption, however. It also suggests a much more interesting origin, as I will point out below.

First, a little about the couple represented in the diptych.

Who Were These People?

Federico da Montefeltro (1422–1482) and Battista Sforza (1446–1472) were the count and countess of Urbino, a hill town in the Marches region of eastern Central Italy. The Uffizi Gallery website erroneously refers to them as the “duke and duchess of Urbino.” Since Battista died two years before Federico (often spelled Federigo) was elevated to the dukedom, she never became duchess of Urbino.

Federico was the greatest of all the Renaissance “condottieri” (commanders for hire)—not for his military prowess alone but for his creation of a ducal court second to none in cultural development and refinement. Baldassare Castiglione’s classic “Book of the Courtier” dubbed him “the light of Italy.”

Battista—Federico’s second wife—was a scion of the powerful Sforza dynasty centered in Milan. Classically educated and schooled in the formal duties of court life from an early age, she was a remarkably fit consort for Federico, though 24 years his junior. Not yet 14 when they married, she bore him no fewer than seven children and capably managed their domain during his frequent absences in the pursuit of military campaigns.

Both Federico and Battista were widely praised in their day for their virtuous qualities and their benevolence as rulers. Piero’s depiction of them amply reflects such nobility of character, showing them in dignified profile high above a landscape backdrop suggestive of their domain.

Comparison with other portraits of Federico, both earlier and later, reveals the extent to which Piero idealized and refined the battered warrior’s features to suggest dignity and probity. A telling contrast is the homely countenance shown in a medal by Clemente da Urbino dated 1468. Though probably a few years earlier than the Piero portrait, it lacks the vigor of the later depiction.

Less is known about Battista’s actual appearance. But a striking aspect of Piero’s depiction of her is her extreme pallor compared to Federico’s sanguine complexion. While it may simply be due to conceptions of feminine beauty in that era, it has also been interpreted as indicating that she was no longer living when the portrait was painted.

Significantly, the pairing of such profile portraits with allegorical scenes on their reverse is unique among extant paintings. It was characteristic of commemorative medals dating back to antiquity, however, and thus endows the work with a decidedly monumental quality.

The allegorical scenes on the back of the portraits are especially rich, both stylistically and iconographically, and their meaning is enhanced by Latin inscriptions on the simulated architectural parapets below them.

Their iconography draws on a long and complex tradition harking back to Roman triumphs in celebration of major military victories.

That tradition had been greatly enriched by a series of allegorical poems penned in the 14th century by the early Italian poet Francesco Petrarca (Petrarch). In contrast to the Roman military triumphs, Petrarch’s “Triumphs” were allegories of philosophic and moral abstractions: Love, Chastity, Death, Fame, Time, and Eternity.

Piero’s luminous pictorial triumphs contain elements from both the classical and the Petrarchan traditions. Federico’s triumphal car is drawn by a team of white horses, as was customary for victorious commanders in antiquity. Like them, he is also crowned by a winged personification of Victory.

In addition, Federico is accompanied by four allegorical figures, seated at the front of his car.

They differ from those of Petrarch, however, instead representing the four cardinal virtues of the Catholic faith, which also had roots in ancient Greek philosophy. They were Prudence, Justice, Fortitude, and Temperance—attributes especially relevant to leadership.

In contrast, Battista’s triumph represents the three theological virtues, which were generally regarded as especially relevant to the feminine sphere. They are Faith, Hope, and Charity. Most important here is the figure of Charity, who sits at the forefront of the car holding a pelican.

That attribute has particular significance, as it was not generally employed in secular contexts. Because the pelican was believed to pierce its breast to feed its young with its own blood, it had come to symbolize Christ’s sacrifice for mankind. As we shall see, it bore poignant relevance to Battista.

Next to Charity is the personification of Faith, holding a chalice and a cross. Standing behind Battista and facing toward the viewer is the figure of Hope. The other standing figure, garbed in gray with her back turned to us, may represent a nun of the Clarissan order, with which Battista had close personal ties.

As in Petrarch’s “Triumph of Chastity,” Battista’s triumphal car is drawn by unicorns, emblematic of Chastity, further suggesting her virtuous character.

Important clues to the date and genesis of the diptych are offered by the prominent transcriptions below the triumphal scenes. Federico’s inscription clearly alludes, in the present tense, to his greatness as a commander. Rendered in English it reads:

The famous one is drawn in glorious triumph
Whom, equal to the supreme age-old captains,
The fame of his excellence fitly celebrates,
As he holds his scepter.

In contrast, Battista’s inscription begins by referring to her in the past tense.

She who retained modesty in good fortune
Now flies through all the mouths of men
Adorned with the praise of her great husband’s deeds.

Moreover, the phrase “flies through all the mouths of men” echoes lines that the Latin poet Ennius had penned as his epitaph:

Let no one honor me with tears or on my ashes weep. Why?
I fly living through the mouths of men.

Made famous by the more eminent Latin writer Cicero—who quoted them in his philosophic meditations on death—the epitaph of Ennius was taken to mean that the fame of a virtuous person extends beyond death.

The clear implication of Battista’s inscription, therefore, is that she was no longer living when the diptych was created.

Who Commissioned This Remarkable Work?

In his 2014 biography of Piero della Francesca, James R. Banker argues (based in part on the Latin transcriptions) that the diptych was painted “soon after Battista’s death,” and that it was commissioned by Federico “to memorialize his wife and their marriage.”

While I agree about the date, I have long believed that Federico’s commissioning the diptych would have been incompatible with the tragic circumstances surrounding Battista’s death. Let me summarize the main events here.

When Battista died, in early July 1472, Federico had just returned home following his most celebrated military campaign. On behalf of the Medici rulers of Florence, he had suppressed a rebellion by the city of Volterra, a mineral-rich Florentine tributary. In gratitude, the city of Florence had granted him the rare tribute of a live triumph, to which Piero’s pictorial triumph may well allude.

Equally important, in January of that year Battista had at last given birth to the couple’s only son and heir, Guidobaldo—after 11 years of marriage, during which she had borne at least six daughters. The death of his young wife so soon after that joyous event inspired intense mourning on Federico’s part, and an outpouring of sympathy throughout Italy.

To compound the tragedy, it was reported that Battista had prayed for a son and heir worthy of her noble husband, offering her own life in return—a pledge she had now fulfilled. The pelican of Charity in her triumphal scene is a likely allusion to that sacrifice.

Given that sorrowful context, I argued decades ago in a thesis on the diptych that the verses inscribed under the triumphs “strike a jarring note.”

The proud vaunt of Federico’s inscription seems inappropriate to his grief. And the meager praise of his beloved countess, whose fame is said to derive not so much from her own virtue as from the deeds of her famous husband, is an ungenerous … final tribute; one would think that the paintings were more a monument to Federico than a commemoration of his consort. Surely this is not the most fitting memorial a bereaved husband could devise for a wife who was eulogized by all Italy.

Consequently, I proposed that the diptych had been commissioned for Federico, not by him—as both a tribute to him and a consolation for his great loss.

As I further suggested, it is tempting to think that the donor of such a splendid gift might have been none other than the eminent patron of the arts Lorenzo de’ Medici—who would have had particular reason to honor Federico, given the crucial victory at Volterra.

This article is based on Michelle Marder Kamhi’s art history Master’s thesis, which can be read in full at TinyURL.com/v7t329da. For more about her work, see mmkamhi.com

An earlier version of this article had mismatched the captions for the back panels of the portraits. The left panel depicts Federico da Montefeltro. The Epoch Times regrets the error.