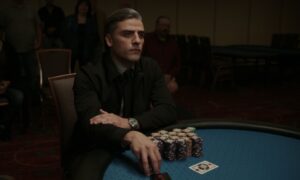 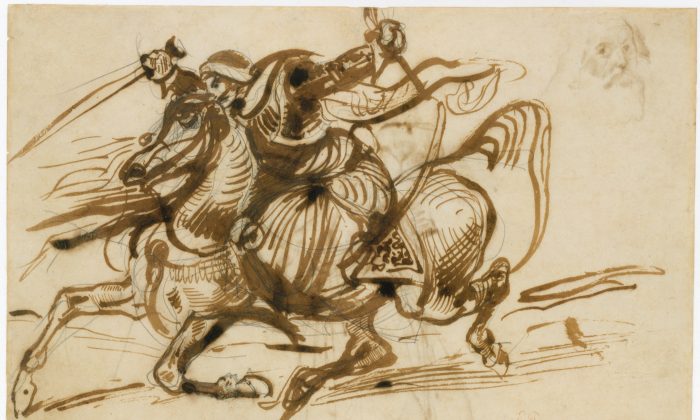 The Karen B. Cohen Collection of Eugène Delacroix, at The Met
By Milene Fernandez

NEW YORK—“Many people have some knowledge of Delacroix the painter; far fewer know Delacroix the draftsman,” Ashley E. Dunn said, introducing the exhibition that she organized, “Devotion to Drawing: The Karen B. Cohen Collection of Eugène Delacroix” at The Metropolitan Museum of Art. Indeed, even for those unfamiliar with the French Romantic painter’s name, Eugène Delacroix (1798–1863), they would recognize his allegorical painting of the robust, bare-breasted female figure holding the tricolor flag while leading people over a barricade with fallen bodies in the foreground, “Liberty Leading the People.” Now we can see Delacroix’s figure study drawings in preparation for that emblematic painting for the French Republic, along with more than 130 other drawings by the artist, until Nov. 12.

The exhibition celebrates a major gift from Karen B. Cohen, an honorary trustee of the museum. Over the years, Cohen had given The Met about 50 works. Last year, she announced she would give almost all of her entire collection of Delacroix works, about 80 more, to the museum.

“The Met is now the foremost institution for the study of Delacroix outside of Paris. It is an extraordinary achievement,” the president and CEO of the Met, Daniel Weiss, said at a press preview. “[‘Devotion to Drawing’] also marks the first North American exhibition devoted to Delacroix’s draftsmanship in more than 50 years. A number of these works are on view here for the very first time ever, anywhere.”

The scope and timing of the exhibition could not be better. In terms of scope, the drawings show almost every aspect of Delacroix’s artistic training and career: his academic nude figure drawings; his écorchés, or flayed anatomical studies; copies of old master prints and caricatures; drawings from life and nature; compositional studies for large paintings and murals; theater illustrations; and ink, wash, and watercolor drawings he created from memory and from his imagination. The variety is quite surprising because many of these have never been seen before.

In terms of timing, such a survey into Delacroix’s development as an artist and insight into his creative process provides a wonderful precursor to The Met’s upcoming retrospective exhibition, co-organized with the Louvre and simply titled “Delacroix.” That comprehensive exhibition of the artist’s life and career will be open to the public from Sept. 17 to Jan. 6, 2019.

Delacroix’s écorchés are not dated, but his name appears on the list of artists who were making drawings of a cadaver at a charity hospital in 1828. By that time, Delacroix had already participated in three Salons (the official art exhibitions of the Académie des Beaux-Arts in Paris) and was already a well-established, well-regarded artist. “The fact that he was continuing to practice one of these very fundamental exercises is very significant,” Dunn said at the press preview. It hints at Delacroix’s vivacious drive to continue to develop his skills and artistry throughout his lifetime.

Delacroix studied with neoclassical painter Pierre-Narcisse Guérin (1774–1833) at the age of 17 and a year later at the École des Beaux-Arts (School of Fine Arts). His manner of drawing would depart from the academic style—from smooth and meticulous rendering—to more loose crosshatching to depict forms. Yet, in addition to anatomical studies, he would continue the academic practice of drawing plaster casts and copying old master prints throughout his lifetime. He kept his drawings private and signed only a few for public display.

Like previous old masters, Delacroix valued training his hand, eye, and mind through drawing, but his approach was idiosyncratic. He endorsed a three-step method: beginning with tracing, progressing to freehand copying, and then drawing from memory. “Before you begin, study unceasingly, but once started … you must execute freely,” Delacroix wrote in his journal.

Delacroix is considered one of the last old masters, along with Jean-Auguste-Dominique Ingres (1780–1867), and one of the few who has been photographed. His training was no less rigorous than Ingres’s, “but he definitely pursued an independent, an almost autodidactic sort of study as well,” said Dunn, the assistant curator in the department of drawings and prints at The Met.

Unlike other old masters, he never traveled to Italy, which was almost requisite for ambitious French artists of his time, to learn from the classical past and Renaissance masters. Instead, Delacroix absorbed the classical past through looking and copying prints, especially those of Peter Paul Rubens (1577–1640), whom he mentions most frequently in his journal.

“Copying fine pictures is … a real amusement, which makes study a pleasure; the memory of beautiful works is thus preserved by means of labor unaccompanied by that fatigue and anxiety that the inventor experiences,” Delacroix wrote in his journal.

One of the drawings on display is Delacroix’s copy of a drawing by his colleague Théodore Géricault, who is mostly known for the great masterpiece “The Raft of the Medusa.” Géricault was just seven years older than Delacroix, and they were both studying in Guérin’s studio. Delacroix actually posed as one of the victims in Géricault’s masterpiece. “This drawing, we think, is an example of Delacroix copying Géricault’s drawing of Delacroix,” Dunn said. “It’s basically a drawing of himself,” she said.

The Germ of the Work

The second gallery in the exhibition shows Delacroix shifting from copying other artists to observing the world around him. We can see a wonderful drawing in one of his sketchbooks and charming studies of horses in motion.

In 1856 Delacroix claimed, “I still have an inexhaustible appetite for nature and a faculty for receiving impressions such as one usually possesses only when one is young.” He later wrote, “What is known as creation in the great painters is only a special manner in which each of them saw, coordinated, and rendered nature.”

Yet “the study of nature wasn’t a goal in and of itself; it was just an essential ingredient for Delacroix in his moving toward something more ambitious,” Dunn pointed out.

While Delacroix valued copying as much as making spontaneous premières pensées (first-thought sketches), just as he valued drawing from life, ultimately it seems his aim was to create from memory and from his imagination. He wanted to come up with “new formal solutions to convey nature’s effects,” Dunn wrote in the catalog. In other words, he regarded drawing from nature as an essential step toward invention. Delacroix wrote in his journal: “If one is in the habit of working without a model—however happy the original conception—one misses those striking effects which the great masters obtained so simply, because they rendered an effect in nature—even a commonplace one—in a naive way.” By “naive,” he meant relying on observation to inject a sense of life into a picture.

Delacroix also drew the human form from photographs, from a series of photographs of posed models that he produced together with the amateur photographer Eugène Durieu. Delacroix seemed to have an endless curiosity in training himself and in trying different mediums, styles, and subject matter. “The variety is, in fact, emblematic of his role in the history of French art,” Dunn wrote in the exhibition catalog.

In anticipation of the “Delacroix” retrospective, perhaps Delacroix’s premières pensées, the compositional studies for his major commissions, would be the most fascinating. We can see, among several other premières pensées, three drawings for what would become murals in the government building Palais Bourbon, in the Salon du Roi where King Louis-Philippe would have met with his deputies. These drawings relate to a frieze depicting war.

Through the entire exhibition, we are able to trace the evolution of Delacroix’s oeuvre. Dunn has also aptly sprinkled insights and quotes from his journal in the descriptions for the drawings.

Delacroix’s capacity for self-reflection and insight into the creative process and the value art engenders comes through in his journal, Dunn explained, as he describes the advantages of drawing from life:

“Learn to draw and in returning from travel, you will carry with you souvenirs far more interesting than the journal in which you endeavor to record every day your emotions in each place, before each object. That simple pencil sketch beneath your eyes recalls with the scene there portrayed, all the associations connected with it—what you were doing before or after—what your friends around you were saying—and a thousand delicious impressions of sun, air, and the landscape itself that the pencil cannot translate. More than that, it enables the friend who could not follow you in your journey to enter, as it were, into your emotions, because where is the description, either written or oral, which has ever conveyed a complete idea of the object described?”