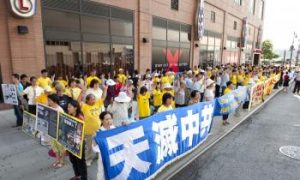 A Peaceful Force at the Chinese Consulate
0
Life & Tradition

Defibrillator Procedures: 22 Percent of Patients Did not Qualify

Implantable defibrillators, devices used to shock a heart attack victim back to normal, are improperly used, according to the Wall Street Journal citing a Journal of the American Medical Association study on Tuesday.

Researchers analyzed more than 111,707 heart patients and found that more than 22 percent of those who received them did not qualify for a defibrillator, which could adversely affect users’ health and pocketbooks, the Journal noted.

“Clearly there is a lack of knowledge and a lack of awareness of the guidelines, and some patients were harmed,” Sana Al-Khatib, lead researcher from the Duke Clinical Research Institute, told Bloomberg News. “More education is needed. Hopefully physicians will look at our results and reflect on their practices.”

The devices cost upwards of $30,000 and monitor heart rhythm in users. When the heart beats irregularly, it gives a shock to normalize it, noted the Journal.

Bloomberg reported that the industry makes around $6.6 billion in sales on the devices.

According to the Chicago Sun-Times, the study noted that doctors who do not specialize in cardiac electrophysiology had a lesser chance of using proper guidelines when implanting defibrillators.

"It is likely that all physicians require further education to understand the rationale for the guidelines and potential alternative approaches when a patient does not meet guidelines for ICD [implantable cardioverter-defibrillator] implementation,” the study said, according to the Sun-Times.

Heart doctors fired back, however, saying that physicians were properly implanting the defibrillators on those who need them.

The Heart Rhythm Society, a group representing heart rhythm specialists, released a statement to the Journal that the “vast majority of implanting physicians” are doing so with the idea that they are “providing the best care for their patients.”