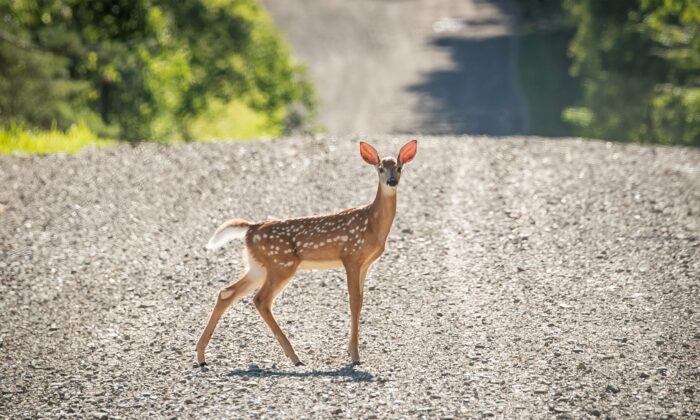 A new study found that white-tailed deer on Staten Island, New York, were infected with the COVID-19 Omicron variant, triggering concerns that the variant could spread via animals.

The study, which is in preprint and was published on the BioxRiv website, was carried out on Staten Island between Dec. 12, 2021, and Jan. 31, 2022. They found that of the 131 deer that were sampled, 19 tested positive for having Omicron antibodies, suggesting a prior exposure to the virus.

PCR testing of 68 deer found that about four tested positive for Omicron.

The research, the study found, “highlights an urgent need for comprehensive surveillance of susceptible animal species to identify ecological transmission networks and better assess the potential risks of spillback to humans.”

Previously, scientists have reported COVID-19 variants in deer across the United States. However, the Staten Island study appears to be the first to confirm that Omicron has been detected in deer.

“The circulation of the virus in deer provides opportunities for it to adapt and evolve,” Vivek Kapur, a veterinary microbiologist at Penn State University, told the New York Times. “And it’s likely to come back and haunt us in the future.”

The researchers noted there is no evidence suggesting the deer can spread the virus to humans. But they speculated that Omicron could be spread to deer by hand-feeding them in the park or more indirectly via wastewater.

Officials in Denmark killed the country’s entire mink population in 2020 over fears COVID-19 could transmit from the animals to humans. And earlier in 2022, officials in Hong Kong ordered the mass culling of hamsters after a pet store worker and hamsters were confirmed to have tested positive for the virus.

Previously, in August 2021, the U.S. Department of Agriculture (USDA) conducted a survey of about 500 deer in Illinois, Michigan, New York, and Pennsylvania. The agency found that about 33 percent of those deer had COVID-19 antibodies.

“We do not know how the deer were exposed to SARS-CoV-2,” USDA spokeswoman Lyndsay Cole told Reuters at the time. “It’s possible they were exposed through people, the environment, other deer, or another animal species.”

The Ohio State University College of Veterinary Medicine collected samples from the infected deer in Ohio from January to March as part of ongoing studies last year, the USDA stated. The samples were presumed to be positive for COVID-19 in university tests, and the cases were confirmed at USDA’s National Veterinary Services Laboratories, according to the statement.