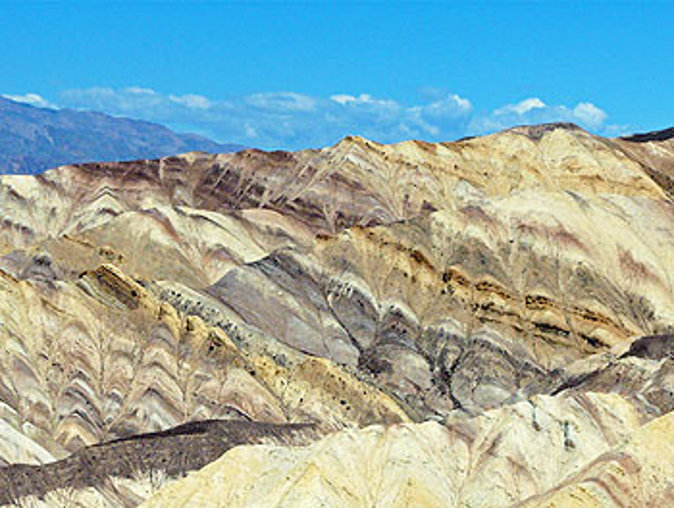 Death Valley California: The Innards of the Earth

California’s Valley of Death is the lowest, hottest and driest in North America, as low as you can go at minus 282 feet (86 meters), smack dab in the middle of the largest national Voted Top Story of 2010 by GoNOMAD’s Readers. Congrats Shelley!park in the coterminous United States (140 by 5-15 miles; 225 by 8-24 kilometers), a mere 85 miles (136 kilometers) from the highest point atop Mt. Whitney jutting 14,494 feet (4418 meters); perhaps proving it’s time the U.S. went metric.

Death Valley was a rich ‘un, chock full of white gold, aka borax, regular gold, copper and silver. The gold mining boomtown of Ryolite lasted a decade, exploding with 10,000 speculators, its own stock exchange and ribald opera, but the mine closed in 1911 and the population plummeted to zero.

Twentieth Century Death Valley was distinguished by eccentric characters. Perhaps the most vivid was Death Valley Scotty, a graduate of Buffalo Bill’s Wild West Show and spinner of tall tales.

Scotty’s Castle, a sprawling pink extravaganza remains a primary attraction at the north end of the Park. It was built by Chicago businessman Albert Johnson who admired gabby Scotty as his own alternative Wild West Show.

Scotty’s pithy philosophy is carved on his gravestone high on a hill overlooking the castle: “I got four things to live by: Don’t say nothing that will hurt anybody. Don’t give advice — nobody will take it anyway. Don’t complain. Don’t explain.” Accordingly Scotty never explained where the theoretically richest gold mine in Death Valley, discovered, known and mined solely by him, was actually located.

Today the visual riches of Death Valley attract tourists from around the world, Europeans and Asians converging in rental cars and chartered RVs. My initial favorite attraction was cheek to jowl with tourists staring at rare standing water, appropriately named Bad Water, a few hundred yards from the Valley’s lowest spot.

Bad Water acts as a superb reflecting pool for the snow-capped mountains to the west, framing salt plains stretching umpteen miles to infinity.

Five hundred and fifty square miles of salt plain sit below Sea Level; if the sediment above the Valley floor’s sinking bedrock were blown away Death Valley would be over 9000 feet (2745 meters) below Sea Level, by far the deepest dip on the planet.

The gaily colored innards of the earth decorate the eastern edge of the Valley, offering spectacular hikes and excellent drives, except for tourists stuck in an RV and thus unable to negotiate the narrow roads and tight curves.

My two favorite loop drives are truly gorgeous. The most popular is Artist’s Drive and Palette, a 13-mile narrowly-paved loop from which vehicles longer than 25 feet are pragmatically prohibited. The best other driving circuit is 20 Mule Team Canyon, a marginal dirt track winding through badlands stratiated in hues from mustard yellow and orangey red to lava black and turgid teal.

The very best hike is the 4-mile (7-kilometer) Golden Canyon loop that winds through petrified fingers of dunes among domes of towering beauty and undulating waves of crackling color.

Golden Canyon sits immediately below the Valley’s most popular panorama at Zabriskie Point, for some reason over-populated by eccentric European women tottering up the trail in extremely high heels. But brightly dressed European tourists provide helpful accents to the scenery; for 1000 unspoken words see the photo titled Zabriskie Point.

However, all Death Valley hikes are not created equal, which means beware of National Park literature lauding Falls Canyon as a spectacular wilderness canyon except for those for whom spectacular means brown stratiated with drab, accented by beige lowlights.

Amazingly, two sets of tourists I chatted with in Falls Canyon, relative locals and exotic foreigners, described the Falls Canyon hike as spectacular, a word that apparently means something different in English spoken by those from Oakland and Portugal.

Copyright © 2014 by Go Nomad. This article was written by David Rich and originally published at www.gonomad.com