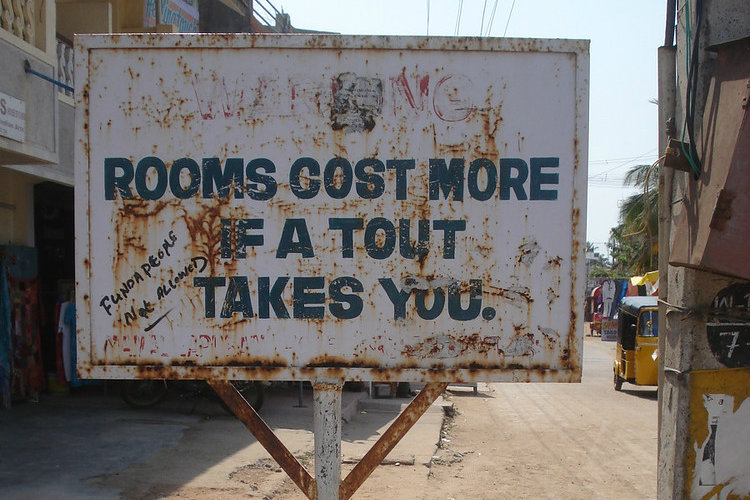 Dealing With Room Touts in India

When you get off a bus in India you will usually be greeted by rickshaw drivers eager to take you to a hotel that they recommend.

When I get to a new town I find the best thing to do is to tell the rickshaw driver you already have something booked. It’s not practical to book guest house type rooms in advance in India so I usually pick something out of my guidebook and tell them I am booked there. That will at least get me to the neighbourhoods where there is other accommodation.

You will usually get told that the place you are going to is very bad and they can take you somewhere better. I tell them that every rickshaw driver in India has used the same line on me.

Of course this does not always work as the place you choose might be fully booked. This happened to me in Bangalore. The same driver was still outside as well so he flashed me some cards of hotels he could take me to. There were no other hotels in the street so he had my patronage.

My man took me to a hotel far from anywhere and it cost nearly twice as what the card quoted. I was so tired by this stage that I didn’t care. It was a nice hotel at least with air conditioning and TV, so I kicked back and watched some world cup cricket and took it as a lesson learned not to go with rickshaw touts again.

This is not to say that this happens every time. There are a great number of home stay accommodation in Kerala for example. I stayed in a good place in Alappuzha where a man approached me at the bus station. The room was central, clean and economical.

The most important thing to remember is that it is ok to say no if don’t want to go or are not convinced of the accommodation on offer.