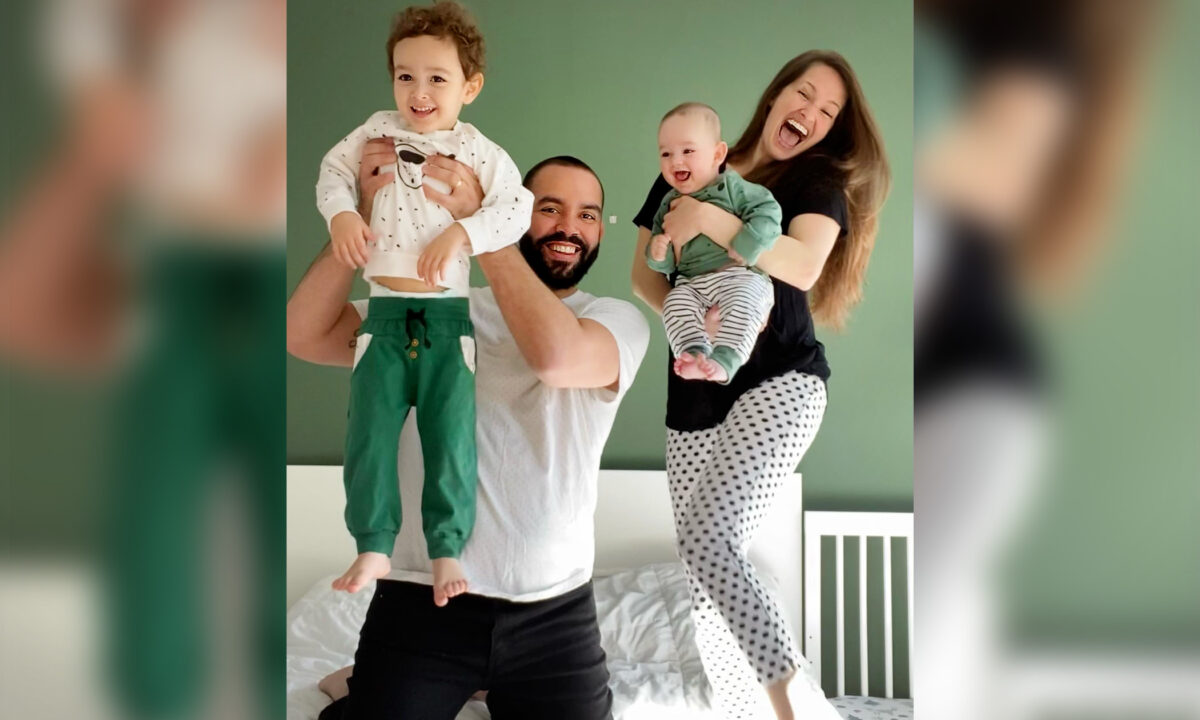 Maryland mom Janet Moreno wasn’t born deaf like her husband, Daniel, was, but lost her hearing when she was a baby. Nor were their two young boys, Luke and Jason, born lacking their hearing. Yet for both parents, who managed living a life without sound into their 30s, raising fully abled kids presented a whole new world of atypical adventures.

Among other hurdles, the mom from New York state had to “hear” her baby cry using a sonic baby monitor at night that shakes their bed, vibrates her pillow, and flashes; they’ve had to somehow teach their son to say “bye-bye” in spite of their “deaf accent”; and Janet had a “most embarrassing” run-in with a contractor, with her said accent mispronouncing facet, “fawk-et.”

But the social acrobatics their deafness demanded began not with their children, but in their own childhoods.

“I was born hearing, but with a birth defect called gastroschisis, basically born with my intestine outside of my body with a hole where my belly button is,” Janet told The Epoch Times — in writing. “The doctors basically sewed me up too quickly that it caused meningitis (high fever) at 4 months old, which then caused damages to my ear drums that I was hard of hearing.”

Like Daniel, it wasn’t until her school years that she realized she was different from her classmates. She was held back in elementary. “I never really connected the dots that being deaf is different. There are a lot of factors involved, but, yes, fifth grade did it for me,” she said. “Kids can pick things up from people talking around them. I can’t because I am deaf, you know?” Daniel, who grew up in Venezuela, experienced similar trials, particularly during family gatherings where chat increasingly replaced childish horseplay.

Years on, when they both graduated from college — both studying design at Rochester Institute of Technology — they met at a grad party at a friend’s apartment. “He showed up with a mutual friend of ours. I think I saw him first. I saw him walking in from the corner of my eye,” she shared. “A friend of mine was trying to tell me something, and I didn’t want to be rude and look away to see who walked in, you know?! Anyways, so he walked in and he seriously just looked around the room and then walked straight to me to pretty much hit on me. Hah!”

Although engaged at the time, Janet, broke that off, and the next summer, she and Daniel hit it off at the DMV. “We are both follower of Christ,” she said. “We just meshed well together. When you find your person, you just know it in your guts.”

The pair can now communicate by just looking at each other, Janet said. But among the hearing, it’s a different matter. They have to write down what they say to Janet and Daniel, though not everyone’s willing to take the time. That taxes social interaction. “It bugs me sometimes how people in general would refuse to write things down and would prefer to just have me dismissed rather than dealing with me,” she said. “It’s hurtful at times, but it does happen. On the other hand, there are times where people were really kind enough to ask how to sign a few words after communicating on paper or through notes on my iPhone.”

It boils down to patience and kindness, she said.

As far as kids, Janet worried about passing gastroschisis onto her child, but, on learning she was pregnant, they were thrilled. “I was extremely overwhelmed with gratitude!” she said. “I would say, a mix of bliss, shock, excitement, and worry. I had faith and so did Daniel, but sometimes my fear would take over.” She posted a video on her Instagram in 2018 in which she shared the news, her radiance speaking louder than words, and it went viral. Last June, they posted Jason’s gender reveal.

Luke is now 3 and Jason 5 months old. Raising two rambunctious boys has been a unique challenge for the deaf parents. As for story time and lullabies, they found a way, as more videos attest to. Trips to Target became adventures in their own right.

Spending a summer with her twin sister, Jennifer, and niece, Janet realized deaf and hearing parents are the same — but still different. “There are a few times where I noticed I cannot do what she does,” Janet said. “She can call out for her daughter and she can multitask while having a conversation with her. However, I cannot do any of that. I cannot hug my son and have a conversation at the same time. I cannot hear Luke call out for me or vice versa. I cannot chat with him when my hands are full, especially when I cook, wash dishes, or fix his toys.”

The Morenos need their kids’ full attention, face to face, to “talk.” Facial expressions, signing, and body language are the vocabulary. They certainly cannot hear what goes on in another room. “I would have to constantly check on him just to make sure everything is okay,” the mom added. “Other than that, we as deaf parents are no different than hearing parents.”

“Face to face” doesn’t mean “right up close”; as long as they’re in the same open space, it’s fine. “I can vacuum the kitchen and talk with him with one hand while he is paying attention to me in the living room with his toys,” Janet said. “Or when one of us pray, we keep our eyes open. All in all, he understands how important it is for us to be able to see each other.”

The mom jokes that when the couple have a fight, they’ll occasionally flick the lights out on each other to “shut them up.”

Although their two boys can hear, they still don’t grasp that family outsiders don’t know sign language. “He doesn’t perceive us any different from other people just yet,” the mom said. “It will be very interesting to navigate that once he does!”

The Morenos’ philosophy is to let their boys explore, take risks, and discover what sparks their curiosity. “Now, as a stay-at-home mom, I encourage Luke to ask about anything from big to small, from God to the world around us, by asking him questions,” she said. “There are no topics off limits. I encourage him to discover new things, like what color will appear if two specific colors were mixed, or what happens if he throws a ball down the stairs.”

The parents said they feel blessed to witness these little lives grow. “It’s like we, as deaf parents, are the gardeners; we can’t control everything, but we can give him everything he needs and watch him blossom!” Janet added. “All about unconditional love in our home!”

The family FaceTime each other often to touch base and keep good connections, “because if we don’t, chaos happens, and we definitely don’t want that,” she said, adding that, in this way, they’re no different from hearing families.

Some differences will persist. “People do not realize that, as hearing parents, they get annoyed when their kids say, ‘Mom! Mom! Mom!’” she said. “As a deaf mom, my jaw hurts because he always grabs my chin area to face him if he needs me to pay attention to him.”