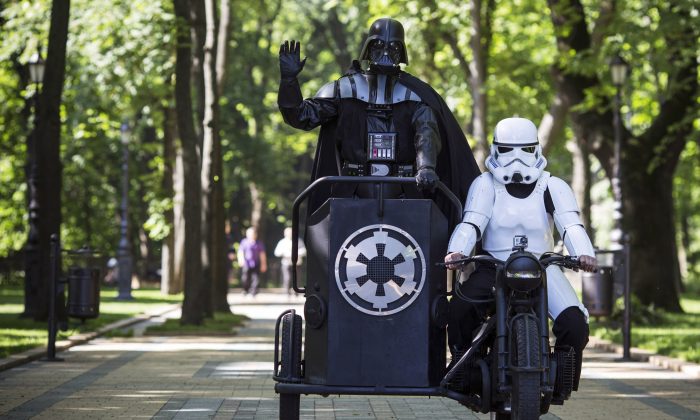 KIEV, UKRAINE - MAY 22: Kiev's mayoral candidate for the Internet Party, 'Darth Vader' arrives to speak to the media on Volodymyrska Hill on May 22, 2014 in Kiev, Ukraine. Ukraine's Presidential elections are to be held on Sunday 25 May. (Photo by Dan Kitwood/Getty Images)
News

A statue of a noble military general recently turned to the dark side when the night came. The snow-transformed Darth Vader figure is actually a statue of Jakub Wejher, the founder of a town called Wejherowo in northern Poland, where the statue is located.

This is a monument to Jakub Weiher located in Wejherowo, Poland.

This is not the first time a Star Wars statue has appeared on European soil. In Ukraine, a Lenin statue was permanently transformed into Darth Vader as part of a decommunization project.

Reddit User MauriceEscargot has also posted a picture of a street in Poland named after Obi-Wan.