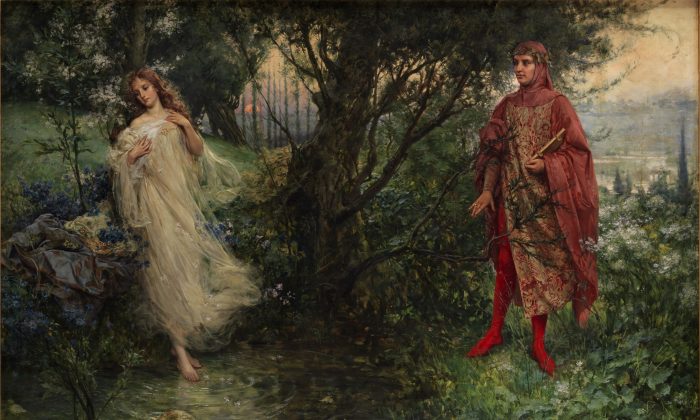 “Dante and Beatrice,” 1906, by Salvatore Postiglione. Beatrice guides Dante through heaven, explains that God’s creations, exiled to earth, long to return to their place of origin. (Public Domain)
Literature

Dante Alighieri: All About Love

When the Beatles crooned “Love is all you need” in 1967, they coined an anthem for the flower power age, but when Dante Alighieri composed “The Love that moves the sun and the other stars,” he created the theme song of the Renaissance and beyond.

Worldwide celebrations are underway for the 700th anniversary of Dante Alighieri’s death, the Italian philosopher poet whose early amorous ditties would give way to an epic poem capable of uniting a scattered nation, inspiring generations of artists, and reflecting a universal human story.

Dante Alighieri, often simply referred to as Dante, was born in Florence Italy in 1265, and as a scion of a distinguished house, he followed the usual track of medieval young influencers: military duty in a few skirmish battles with neighboring towns, a stint at the University of Bologna (then merely a century old), and participation in public political life. But neither war nor statesmanship drew Dante; his path lay in the art of poetry.

Influenced by courtly troubadours of France and Sicily, he moved swiftly away from writing in Latin—still the official language of the Italian peninsula—to the Italian vernacular, the dialect of the people. Dante was soon attracted to a set of young poets pioneering a “sweet new style” of popular verse that employed accessible language, catchy meter, and sang of love, love, love.

He enjoyed fame and fortune until the vicissitudes of medieval politics ousted him from Florence. Dante spent the final 20 years of his life in exile, dependent on benevolent benefactors, and experiencing “the bitter taste of others’ bread,” until he settled in Ravenna under the protection of Guido da Polenta, where he died in 1321.

It was during this turbulent period of his life that the poet errant composed the “Divine Comedy,” a poem of one hundred stanzas, called cantos, divided into three books: Inferno, Purgatory, and Paradise. He developed a rhyme system called “terza rima,” an interlocking musical rhythm that propelled readers through an imaginary journey through the horrors of Hell, the sufferings of Purgatory, and the joys of Heaven. Written in the vernacular, the work crafted timeless images out of words, raising Italian to a language of literature, while forging a common tongue for the fractious populace of the numerous city states freckling the peninsula. Dante demonstrated how the beauty of words could draw people together instead of causing pain and estrangements.

The “Divine Comedy,” although a masterpiece of the Middle Ages, was inspired by the ancient Mediterranean literary traditions of Homer and Virgil, the latter—who famously wrote that “love conquers all”—acting as guide for the first part of Dante’s journey. Yet, while the “Aeneid” recounted the story of the Roman people, and the “Iliad” that of the Greek states, Dante’s poem transformed the human condition itself into an epic tale, proposing an existential heroism that could be transmuted from age to age. Certainly the window dressing of the “Divine Comedy” features a fair amount of medieval insider gossip, but his spiritual journey would resonate with people far beyond his own borders.

Dante, a believer, moved in an age of faith: his heroes are saints and his framework Christian, yet his story captures the collective imagination. Caught in the snares of his own ambitions and desires, Dante describes himself as alone “in a dark wood, having lost the right way.” Paralyzed by fear, hounded by personal demons, the poet bares himself in a fashion that every human being can relate to. Dante’s salvation comes through love, not the amorous dalliances he sang of as a boy, but the transformative self-giving love that confers meaning and purpose. The “Divine Comedy” is a love song about a man who learned to love more than himself.

As Dante painted pictures with words, so artists found inspiration in the images evoked by his poetry. Its most fertile terrain was Florence, where a repentant populace raced to embrace its rejected son. Chapel frescoes reconstructed the “Inferno” while Botticelli turned his genius to illustrating the entire poem. Michelangelo Buonarroti not only dabbled in poetry and knew the “Divine Comedy” by heart but referenced the work several times in his masterpiece: “The Last Judgment.”

But amazingly, long after the lights dimmed on the Renaissance and the Protestant Reformation gave way to the Enlightenment, Dante’s work continued to leaven secularized society. France, fascinated by the “Inferno” as are most Dante neophytes, seized upon the romantic tale from Canto V of Paolo and Francesca, adulterous lovers killed in “flagrante delicto” and buffeted for all eternity by the winds of their passion. Dante’s own evident sympathy for the pair appears to lessen the gravity of their sin, which inspired French painters to depict everything from the romance of the furtive first kiss, to two lithe spirits whose eternal torment is portrayed as a graceful ballet.

In 1855, engraver Gustave Doré took on the herculean project of illustrating the entire opus. Finding no publisher, he took on the expense himself. Doré was gratified by not only the enthusiastic reception of the first book but by a telegram from his publisher reading, “Success! Come quickly! I am an ass!” The 135 drawings are, to this day, the most recognizable illustrations of the poem, where the engraver’s pen beat in perfect time with the poet’s words. Scratching the “Inferno” scenes out of heavy dark lines, Doré evoked tangled nature and lurking demons. When Farinata degli Uberti emerges from the abyss of heretics in Canto X, the haughty figure is surrounded by darkness, emphasizing his choice of prideful isolation.

Light increases in the images of Purgatory, flickering over more energetic strokes, underscoring the dynamic aspect of repentant souls working toward a goal. But Doré’s Paradise is a wonder to behold. Tiny lines cluster to form the exquisite, ethereal figures of saints and angels. Light permeates everything. Doré captures the rapturous power of love, drawing into the contemplation of mystery a harmonious marriage of poetry and pictures.

Thanks to Milton’s “Paradise Lost,” the English knew of the “Divine Comedy,” and the first full translation of the poem was made in 1802. This was followed by a translation by Henry Francis Cary, which would be illustrated by William Blake, who produced 102 watercolor illustrations before his death in 1827. Blake’s images exude vitality with splashy color and naïve figures, but they lack the majesty of Doré. The Pre-Raphaelite movement also dedicated many a canvas to the subject, complementing Dante’s descriptive verse with lavish imagery.

Dante disembarked in the New World thanks to Henry Wadsworth Longfellow. Longfellow, who spent many years in Europe, had started translating sections of the “Divine Comedy” as early as 1839. His admiration for the work inspired his own 1855 opus, the “Song of Hiawatha,” the first epic poem of the United States. As Dante had sought to unify Italians through language, Longfellow aspired to knit together the new inhabitants of North America and its indigenous people by composing a love story set among Native American tribes against a backdrop of its natural beauty.

“Love, that in gentle heart is quickly learnt,” Dante wrote, proposing that no one is immune to the power of love. Longfellow translated that spirit into the nascent literature of the United States, as well as opening access for American students to read Dante’s work. With myriad translations in poetry or prose, and depictions from etchings to animations, Dante’s poem reveals that indeed, love is a many-splendored thing.

Elizabeth Lev is an American-born art historian who teaches, lectures, and guides in Rome.