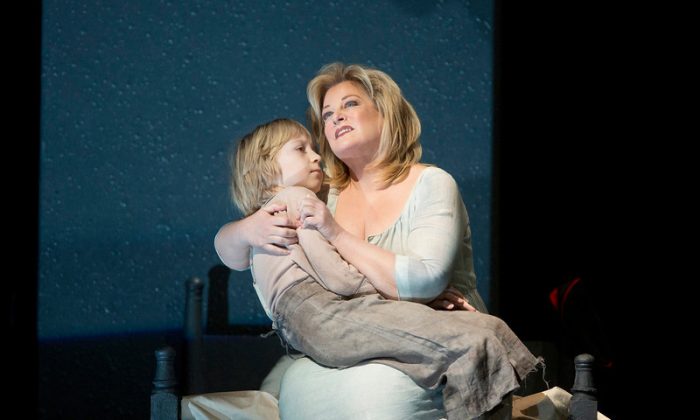 Daniel Sutin Subs Effectively in “Wozzeck” at the Met

Alban Berg’s opera “Wozzeck” is based on Georg Buchner’s expressionistic play, which in turn was based on an actual case. In 1821, a former soldier named Woyzeck (a slightly different spelling than the opera title) stabbed to death his unfaithful mistress. His lawyer pleaded insanity but the defense was unsuccessful and he was executed. In adapting the play into an opera, Berg distilled the work from 26 scenes to 15. When the opera begins, Wozzeck is shaving the Captain, who criticizes him for having an illegitimate child. Wozzeck answers that virtue is a luxury not meant for the poor. The opera makes clear that Wozzeck is unbalanced; he sees visions and hears noises, which a quack doctor who uses him for medical research attributes to an overactive imagination. Meanwhile, his mistress Marie is attracted to a handsome Drum Major and eventually she gives in to his advances. Wozzeck is suspicious, especially when he notices that she is wearing fancy new earrings; she comes up with the unlikely excuse that she found them in the street. He subsequently sees her dancing with the Drum Major in a beer garden, which generates more hallucinations. After an eerie scene in which Marie reads the Bible story of Mary Magdalene to her young son, she goes to the countryside with Wozzeck. He stabs her to death and then commits suicide. At the end, their son is playing when the other children tell him that his mother is dead, but he continues singing and playing.

Everything about the opera is unsettling, even Marie’s lullaby to her son. At the Metropolitan Opera revival, James Levine conducted; he has said that “Wozzeck” is one of his favorite works and he received tremendous and well deserved ovations from the audience. Thomas Hampson was supposed to play the title role and I was curious to see how this elegant singer (who also happens to be a thoughtful actor, as he demonstrated in Verdi’s “Otello” last season in which he portrayed Iago) would handle the part of such a deranged character. Hampson cancelled because of bronchitis. Baritone Daniel Sutin stepped into the lead part at the performance I attended and gave a vocally and dramatically powerful performance. Deborah Voigt was highly effective as the doomed Marie.  Robert Israel’s abstract set was mostly monochromatic—black and gray–except that after Marie’s murder, the background turned to red. “Wozzeck” still packs a punch.

“Wozzeck” will return on March 17 and 22. Thomas Hampson is scheduled to sing the remaining performances.