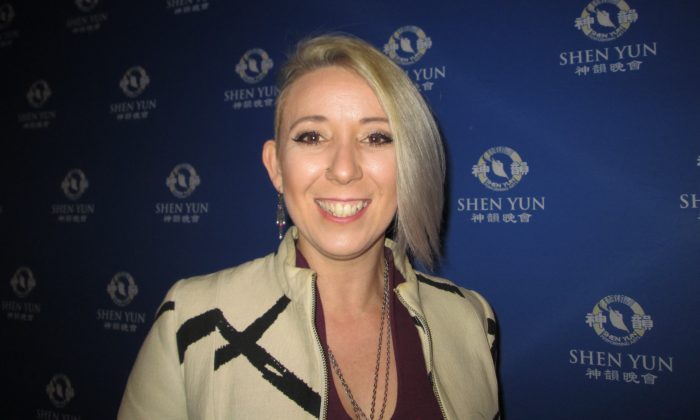 Tiffany Schapero, a dancer and a choreographer, enjoyed Shen Yun Performing Arts at the Smith Center for the Performing Arts on March 6. (Marie-Paul Baxiu/The Epoch Times)

“I thought they did a beautiful job,” she said. “It’s one of those moments where you take a breath and kind of humble yourself down to looking at others and seeing how much work they put into it. And they make it look effortless, which is what we always try to work for as dancers.”

Since 2006, New York-based Shen Yun has been reviving the traditional culture of China and its 5,000 years of history through the medium of music and dance.

Each performance includes a full, live orchestra with both Chinese and Western instruments, classical Chinese dance vignettes, vibrant costumes, and musical soloists in front of an interactive digital backdrop.

“They did an amazing job at telling the story without over-playing it,” said Schapero, “giving that little bit of laughter to keep the audience engaged. It was beautiful.”

Schapero herself performs ballet, hip-hop, jazz, and contemporary dance, and said she was very impressed with Shen Yun’s dancers’ technique, training, and synchronicity.

“Technique training at its best,” she said. “When it comes to that kind of dance and synchronicity, you really have to feel like you’re one as a company, not just an individual. They really portrayed the message as being one as a people, one with their spirituality, and one in their dancing.”

Schapero said the colorful, flowing costumes of the dancers were “absolutely gorgeous,” and she wished she could take them all home with her.

She was also very glad the performance included its own orchestra.

“Live orchestra I always love. I came from an orchestral background originally. I was a violinist for the Los Angeles Philharmonic for a few years. [Shen Yun] did a wonderful job and they definitely had a little bit of fun, I heard some whimsy going on in that pit,” she said with a laugh.

Schapero also commented on the soloist singers, who sung in the Chinese language, and she appreciated the lyrics being projected in English on the backdrop. She also noticed the spiritual theme included in the songs.

“It just takes you back to remembering that there is a spirit above that is there for all of us in whichever form that we see it. They’re there for us above and we have to continually strive for that in life,” she said.

Based in New York, Shen Yun Performing Arts now has six companies touring the globe simultaneously with an all-new production every year.

Schapero said she was taking “love and light” home with her after the performance, and said she “absolutely” would recommend Shen Yun to others.

“If you have a moment in time to stand still, sit in this seat, and watch them,” she said.