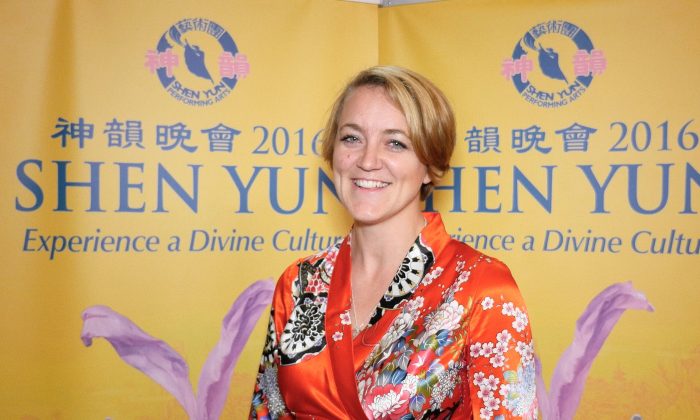 PHILADELPHIA—When a dancing teacher sees dancers with elegant lines, beautiful feet, and synchronous movements, she can’t help but grin from ear to ear.

“I’m just bursting with excitement,” said Diane Brough after watching Shen Yun Performing Arts at the Academy of Music in Philadelphia on Jan. 9.

“It’s just so beautifully put together,” she said.

Ms. Brough who received a dance degree from Brigham Young University, praised not only the precise movements of the dancers, but also their energy, strength, and smoothness. She thought the male dancers were able to make their virgorous movements look effortless.

“The male dancers are magnificent,” she said. They have the ability to defy gravity … and full of vibrant energy.”

She was equally fond of the female dancers who enamored her with their beauty.

Their long lines, their energy that extends beyond their fingertips—it’s just so wonderful.
— Diane Brough

“Their long lines, their energy that extends beyond their fingertips—it’s just so wonderful,” she said. “And they dance so well as one unit.”

The Shen Yun dancers are trained in classical Chinese dance, an ancient art form that has been passed down continuously for thousands of years. This complete dance system is inspired by China’s historically divine culture. Therefore, the dancers express inner meanings of moral concepts like loyalty, forgiveness, and justice through the dance movements.

Because China’s divine culture spans thousands of years, each mini dance performance draws upon the myths and legends from this long history. According to the Shen Yun website, Chinese history has been documented and passed down uninterrupted for 5,000 years, sometimes in vivid detail.

“You can see through the expressions on each dancer’s face and how much they truly are playing these parts and how they truly relate to the characters and to their rich culture and their background. It’s just so wonderful.”

The dancers’ performances are enriched through the animated settings projected behind them via a digital backdrop. Through this magical window, audiences are taken away to other worlds.

Ms. Brough ultimately felt like she had been transported through time and space.

“[The dance] reflects so much of the time that it is now—and the history that’s behind it. Everyone has the same body, yet it moves in these different ways in our relationship, and it reflects the culture behind it,” she said.

“It’s just so exciting. I’m way too excited to be here,” she said.

Reporting by NTD and Arleen Richards