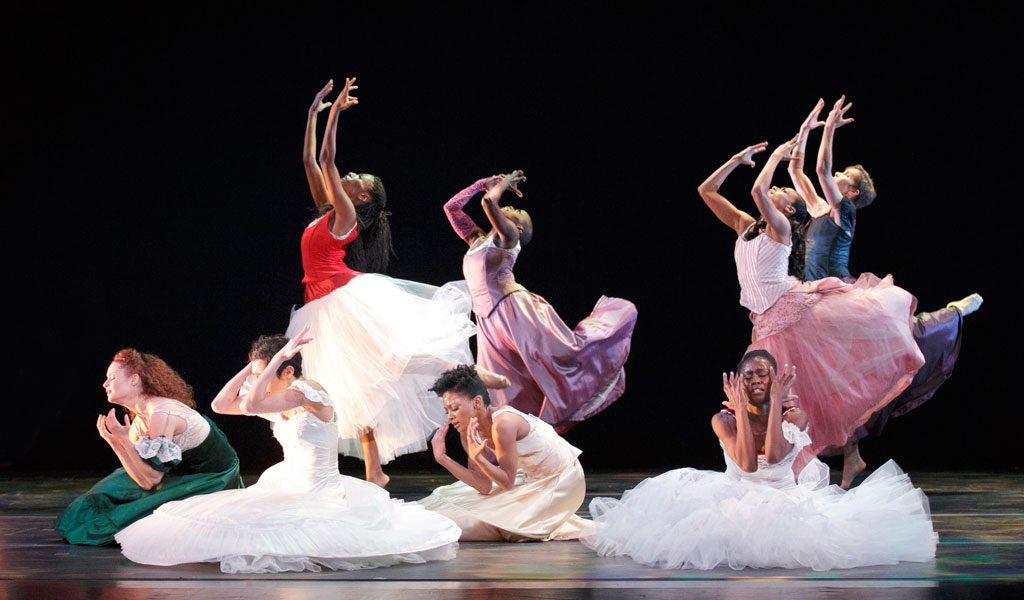 The program I attended began with Hofesh Shechter’s “Uprising.” This is a testosterone-fueled piece, with an all-male cast and a percussive score by the choreographer and Vex’d. The muscular dancers don’t know whether to make love or war, so they do both. A chokehold ultimately turns into an embrace. Constantly moving, the seven dancers wrestle and try to escape one another.

Finally, in a sort of Delacroix scene, one waves a flag, so apparently the uprising was successful. The meaning may be murky—what is the significance, if any, of the flag being red or it just meant to match the color of the shirt of the man holding it?—but the work is certainly an attention-grabber.

If the men in “Uprisiing” are characterized by their aggressive tendencies, the women who dominate Jacqulyn Buglisi’s “Suspended Women” are more sensitive souls. The piece is set to flowing music by Maurice Ravel with additions by Daniel Bernard Roumain.

Buglisi (a former dancer with the Martha Graham Dance Company) has said that the work was inspired by the life and writings of Sor Juana Inés de la Cruz, who was a 17th century Mexican nun, known as a strong defender of women’s rights. It is dedicated to all women since the beginning of time “suspended.” The women are dressed in period costumes and seem to be suffering. Four men appear and throw the female world into disarray, lifting them up and then tossing them aside. The women regain their composure after their partners depart. As depicted by Buglisi, females are resilient but not especially happy.

The last piece on the program is a new one, “ODETTA,” choreographed by Matthew Rushing. The work is meant to honor the late folksinger and to commemorate the 50th anniversary of the signing of the Civil Rights Act, since Odetta (1930-2008) was actively involved in the movement. Dr. Martin Luther King, Jr. dubbed her “the Queen of American Folk Music” and she was also the favorite singer of Rosa Parks. Odetta was one of the performers at the 1963 March on Washington.

The choreography is eclectic, mixing West African, Afro-Cuban, samba, jazz, contemporary ballet and modern dance, to match the many styles Odetta encompassed. Incidentally, a dance piece dedicated to the singer seems especially appropriate since the one time I saw Odetta in concert, I spotted her during the set by the opening act, the Butterfield Blues Band, boogying on the side of the stage.

“ODETTA” is meant to honor the late folksinger Odetta Holmes and to commemorate the 50th anniversary of the signing of the Civil Rights Act.

The work utilizes recordings by Odetta as well as her spoken words, the most powerful of which is her recollection of her first experience of racial discrimination.

There are songs of hope (“This Little Light of Mine”), of despair (“Sometimes I Feel Like a Motherless Child” and “Motherless Children”) and of protest (Bob Dylan’s “Masters of War”). The mood is lightened by “A Hole in the Bucket” (Odetta’s duet with Harry Belafonte, in which the woman has all the brains in the family), wittily danced and acted by Jacqueline Green and Yannick Lebrun.

Jeroboam Bozeman is charismatic as “John Henry” (the “steel driving man”) and Megan Jakel is powerful in “Glory, Glory.” The last section, danced by the ensemble, “Freedom Trilogy,” has a vocal by Ysaye M. Burwell, who sounds quite a bit like Odetta. The work is inspiring and still timely in this era of voter ID laws and protests over the deaths of Michael Brown and Eric Garner.