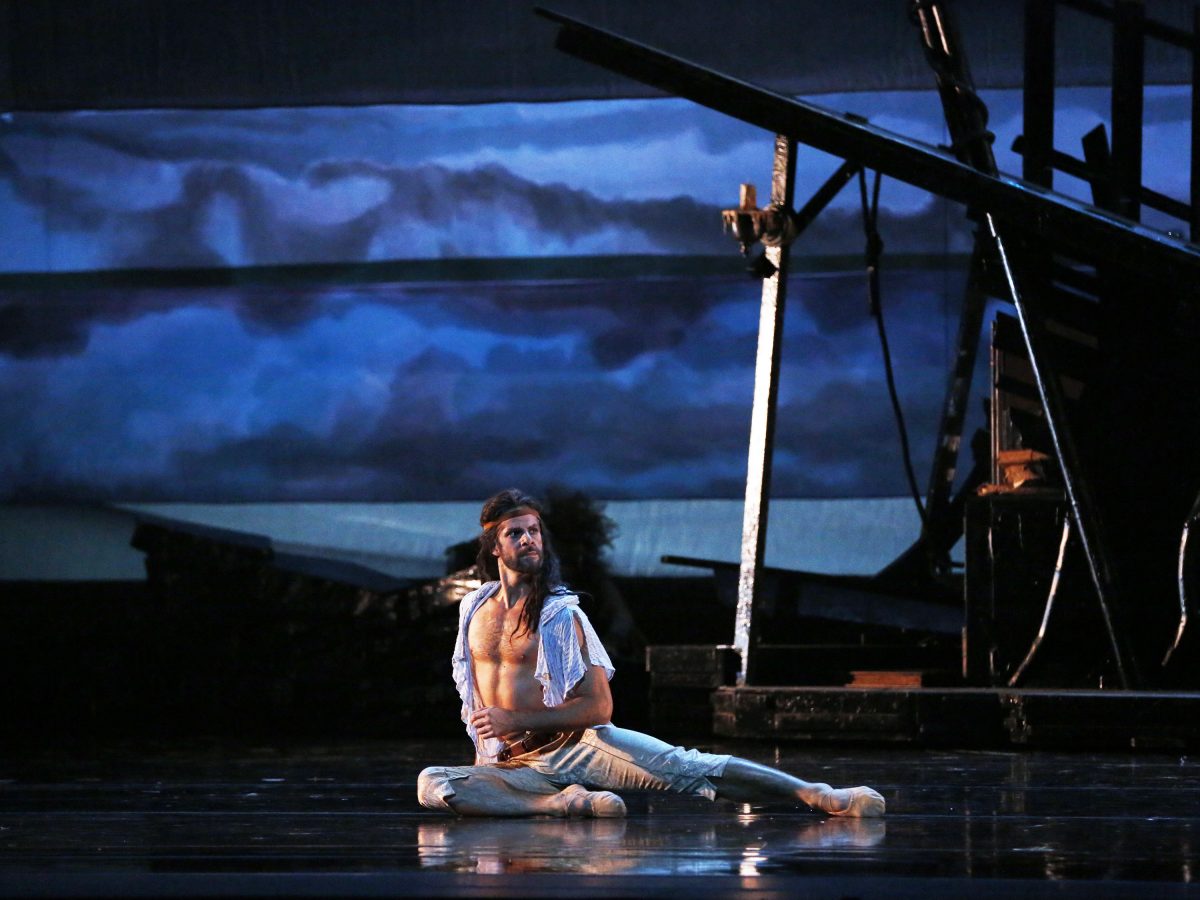 Prospero (Marcelo Gomes) is an outcast on a magical island in ‘The Tempest,’ choreographed by Alexei Ratmansky. (Marty Sohl)
Arts & Culture

NEW YORK—When Herman Cornejo whips across the stage as Puck in Frederick Ashton’s The Dream, (based on Shakespeare’s A Midsummer Night’s Dream), one can’t help but be transported into a magical fairy kingdom.

The Dream, the first half of the double bill offered by American Ballet Theatre (ABT) in celebration of the Bard’s 450th birthday, is accompanied by Alexei Ratmansky’s The Tempest.

Oberon (danced by Cory Stearns for an injured David Hallberg at the performance I saw), decides to punish his recalcitrant queen, Titania (danced by Gillian Murphy), who has refused to give him her changeling child (Andrei Konon).

Oberon orders his sprite Puck to find a particular flower in the forest. The juice of the flower, when dropped into the eyes of a sleeping person, will cause that person when waking to fall in passionate love with the first creature he or she encounters.

The mischievous Puck, impersonated by the truly magical Herman Cornejo, of course, agrees, as he leaps and twirls with otherworldly skill, seemingly unconstrained by human limits. He simply soars, merging perfectly executed entrechats and other technical achievements en l’air. He pirouettes in place like a whirling dervish, all the while living in the skin of a witty nonhuman creature.

First performed with the company in 2002, Cornejo’s performance cannot be classified as anything less than great.

However, Puck mistakenly drops the juice into the eyes of the wrong set of human lovers, (danced winningly by Adrienne Schulte as Helena, Grant DeLong as Demetrius, Stella Abrera as Hermia, and Jared Matthews as Lysander), causing consternation to all.

Titania, having received the juice, awakens to become enamored of Bottom the Weaver (entertainingly danced by Blaine Hoven), one of a group of rustics who has wandered into the forest.

Bottom, who has been transformed into an ass by Puck (wickedly placing an ass’s head upon him), executes a charming, flirtatious solo, dancing on pointe in black toe shoes—apparently his hooves.

All comes right in the end; Oberon corrects all errors and he and Titania perform an exquisite pas de deux. Gillian Murphy has particularly beautiful arms, extremely pliant and with a fluidity seeming almost like water. The elegant lifts and bends of this piece, with extreme back arching by Murphy, build to a sense of abandonment.

Murphy is partnered with affection by Cory Stearns, with the dance ultimately seeming to portray a loving couple who have finally achieved bliss in their relationship.

The corps of 16, executing some of Ashton’s most complex choreography, is, as has come to be expected of ABT, marvelous.

The lighting, so important to this production, is by John B. Read, music arranged by John Lanchbery. The conductor is David LaMarche.

The Tempest
In Alexei Ratmansky’s The Tempest, great stress is placed upon sheer acting, with dancing relegated mostly to characters who best express themselves in movement, such as Ariel, a spirit, danced by Daniil Simkin and Caliban, danced by James Whiteside. The end result might be classified more in the realm of what is sometimes called “modern ballet.”

Prospero, the rightful Duke of Milan (Marcelo Gomes) and his daughter Miranda (the delicate Sarah Lane), who were cast out on this island years ago, now watch as a ship is being wrecked in a storm. Prospero uses his magical powers to save the men, although it was they who had cast him and Miranda out years before.

Doing Prospero’s bidding is Ariel, danced beautifully by Simkin, who might be a distant cousin to Herman Cornejo’s Puck in the earlier “The Dream,” but Ariel is more delicate, less substantial than Puck.

Ariel leads the shipwrecked Ferdinand to Miranda and the two fall in love. Ferdinand (Joseph Gorak), happens to be the son of Alonso (Roman Zhurbin), the present King of Naples, who mourns the death of Ferdinand whom he believes has drowned.

Prospero’s other servant, the primitive half-human Caliban, encounters two of the shipwrecked men, Stephano, a foolish butler, played by Craig Salstein, and Trinculo, a jester, played by Sean Stewart. But the two humans make fun of Caliban, who becomes enraged.

Ultimately Prospero confronts the shipwrecked men, but forgives them for their past treachery. He will return with them to Milan, as their rightful Duke. Miranda and Ferdinand will marry and become future rulers of Milan.

Gomes conveys a strong, authoritative Prospero. His love for daughter Miranda seems almost too protective, but they are alone together against enemies.

As Caliban, James Whiteside gives a remarkable performance, particularly when one remembers his earlier, very different, portrayal of the noble Prince Siegfried in ABT’s Swan Lake, earlier in the season.

The overall effect is one of darkness and mystery. Here the lighting by Robert Wierzel plays great importance.

The set by Santo Loquasto (who also did costumes), which undergoes subtle but important changes as the performance progresses, lends to the mystery.

The choice of music by Jean Sibelius from his incidental music to The Tempest, is fitting and effective; the conductor is Ormsby Wilkins. Dramaturgy is by noted theater director Mark Lamos.

Alexei Ratmansky, born in Russia, is a product of the Bolshoi Ballet School and was artistic director of the Bolshoi Ballet for five years before joining ABT as artist in residence in 2009. He has choreographed for several world-renowned ballet companies such as Paris Opera Ballet and New York City Ballet, and in 2013 he was awarded a prestigious MacArthur “genius” grant.

The season, which ends Saturday, July 5, with two performances of Coppelia, has been extremely successful, with a marked number of excellent soloists as well as the superb ABT corps de ballet. All is under the stewardship of artistic director Kevin McKenzie.