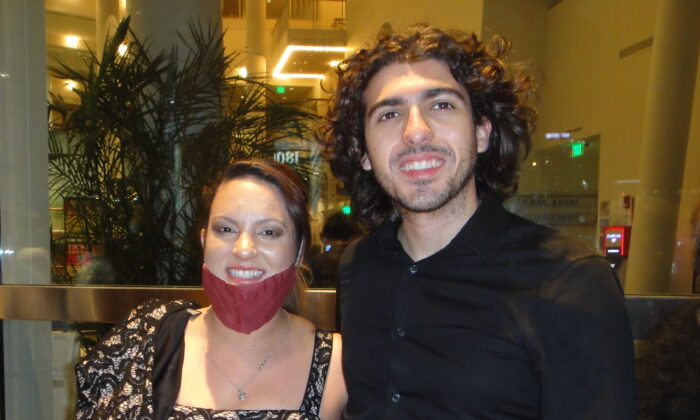 Musician Harrison Ponce and a guest at the Miami performance of Shen Yun on the evening of Jan. 8, 2022. (Teng Dongyu/The Epoch Times)

MIAMI, Florida—Harrison Ponce is a composer, pianist, and cellist. He attended the Jan. 8 evening performance of Shen Yun at the Adrienne Arsht Center for the Performing Arts. The New York-based classical Chinese performance company introduced him to a deeper look at Chinese music and dance.

For instance, the erhu, a two-stringed instrument played with a bow. Shen Yun features an erhu solo as one of its pieces.

“There is so much expression you can make through that with just two strings,” he marveled. “So it was really nice to see that. I think it was nice to see the audience connect with [the erhu soloist], when they maybe haven’t seen an instrument like that.”

Shen Yun’s signature sound is composed of quintessential Chinese instruments like the erhu, pipa, and suona, working in conjunction with a classical Western orchestra. The live orchestra forms the backdrop for the dance performances, which take audiences to faraway locales and historical periods.

“I also do ballet dancing so it was nice to see how similar and not [classical Chinese dance] is,” Ponce said. “I’ve also taken some Chinese dance lessons so I was familiar with a lot of the feet patterns and the hand gestures.”

Classical Chinese dance is has a rich repertoire of difficult flips, turns, and jumps, and has a history of thousands of years. Many other Chinese traditions, such as martial arts and acrobatics, borrow moves from Chinese dance.

Though much of this legacy has been lost throughout the years, Shen Yun‘s mission is to revive it—along with the rich spiritual and cultural heritage that goes with it. As such, some of the dance pieces highlight the true story of cultural and religious persecution happening in China today.

David Lauderback and Becky Miller, who work in real estate development, attended Shen Yun for the first time and had many reflections about what they saw.

“I’m very impressed,” said Mr. Lauderback. “I think we are living through it in the United States right now and I hope that this play will bring everyone’s attention to freedom, and to religious freedom in particular.”

Ms. Miller said she saw the progression of history in Shen Yun’s presentation, from ancient times to today.

There were parts I wanted to cry; it was just beautiful.
— Becky Miller

“There were parts I wanted to cry; it was just beautiful,” she said. “I could see how it was beforehand … but somehow in the time of communism, everything changed—People were not in tune with other people.”

Ultimately, Shen Yun is about hope. Its closing act is one of redemption and salvation. Ms. Miller’s takeaway:

“I think if we don’t get along somehow we are going to destroy ourselves really, so with the Creator coming down he was trying to send a message to the people: everybody had to change, and it starts with you.”

Reporting by Teng Dongyu and NTD.