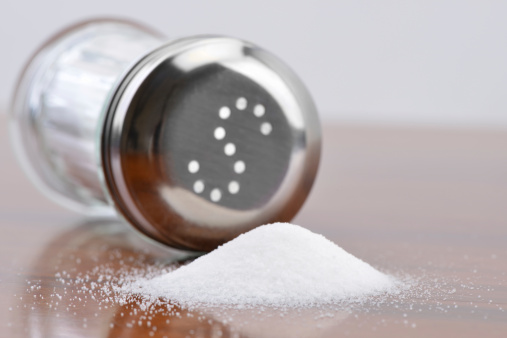 You can reduce your sodium and still salt your food. (Levent Konuk/thinkstock)
Fitness & Nutrition

Cut the Salt, but Not All of It

NEW YORK—More than a quarter of New Yorkers have high blood pressure. Cutting back on salt is one of the key ways to manage this condition.

The good news is that you don’t have to throw away the salt shaker to reduce your sodium by a lot. That’s because only about 10 percent of the sodium we consume comes from the salt we add at the table or while cooking. The vast majority comes from processed foods.

Americans get about 11 percent of their calories from fast food, which is much higher in sodium than home-cooked food.

An ounce of beef has around 19 milligrams of sodium. A regular-size MacDonald’s hamburger (about 1 to 2 ounces) with all the fixings has about 480 milligrams. If you opt for McD’s quarter-pounder with bacon and cheese, you’ll be consuming 1,440 milligrams of sodium, nearly two-thirds of the recommended maximum daily intake of 2,300 milligrams.

Subway sandwiches, which have a reputation for being healthier, are actually not better when it comes to salt. With 1,470 milligrams, a 6-inch Big Hot Pastrami has more sodium than MacDonald’s quarter-pounder. A 6-inch tuna sub packs 600 milligrams of sodium—more than McD’s regular burger.

A key to cutting salt is to check what you buy. Foods like bread, canned beans, and soups, as well as condiments like ketchup, can all add surprising amounts of salt.

According to the USDA, a single slice of whole-wheat bread can have 340 milligrams of sodium, a figure that makes McDonald’s burger almost seem not so bad.

Annie King, a volunteer who has been on the high blood pressure task force of New York City’s health department for over eight years, advises people to read the labels of everything they buy.

“There’s so much hidden sodium in the food that you’ll be surprised at what you’re taking in,” she said at a health fair in Brooklyn on July 23.

King has high blood pressure herself and says that eating less salt and sugar helps her manage it. She also credits cutting salt with helping her lose weight.

No Need for Salt-Free

Salt has a bad reputation of being a big contributor to hypertension. But what many people don’t know is that the body needs salt to maintain a healthy blood pressure. Salt also allows the body to properly regulate fluid balance and is necessary for the nerves and muscles to function.

When sodium levels become too low—which can happen because of drinking too much water, using diuretics, or taking some anti-depressants or pain medications—a condition called hyponatremia can develop.

Hyponatremia causes cells to swell to dangerous levels, leading to symptoms like nausea and vomiting, headaches, confusion, loss of energy and fatigue, restlessness and irritability, muscle weakness, spasms, or cramps, seizures, and even coma, according to the Mayo Clinic.

Multiple studies have failed to find a solid link between sodium intake and heart disease or stroke, providing another reason not to abandon salt completely.

A review of federal health data conducted by researchers at Albert Einstein College in New York found “a significantly increased risk of death from cardiovascular disease associated with lower sodium diets,” even after accounting for risk factors like smoking, diabetes, and blood pressure.

A study published in the American Journal of Hypertension also found no definitive connection between reduced-salt diets and decreased risk of heart disease, although salt reduction appeared to be of some benefit in lowering blood pressure.

The Centers for Disease Control recommends keeping the daily sodium intake to no more than 2,300 milligrams, with a lower limit of 1,500 milligrams for African-Americans, all individuals over 51 years of age, and people with diabetes, hypertension, or kidney disease.

It’s important to note that not all salt is equal. Sea salt contains trace minerals and usually none of the anti-caking chemicals found in regular, processed salt.

This article is provided for information only and is not meant to prescribe medical care. Please consult a physician for treatment of any medical problems.