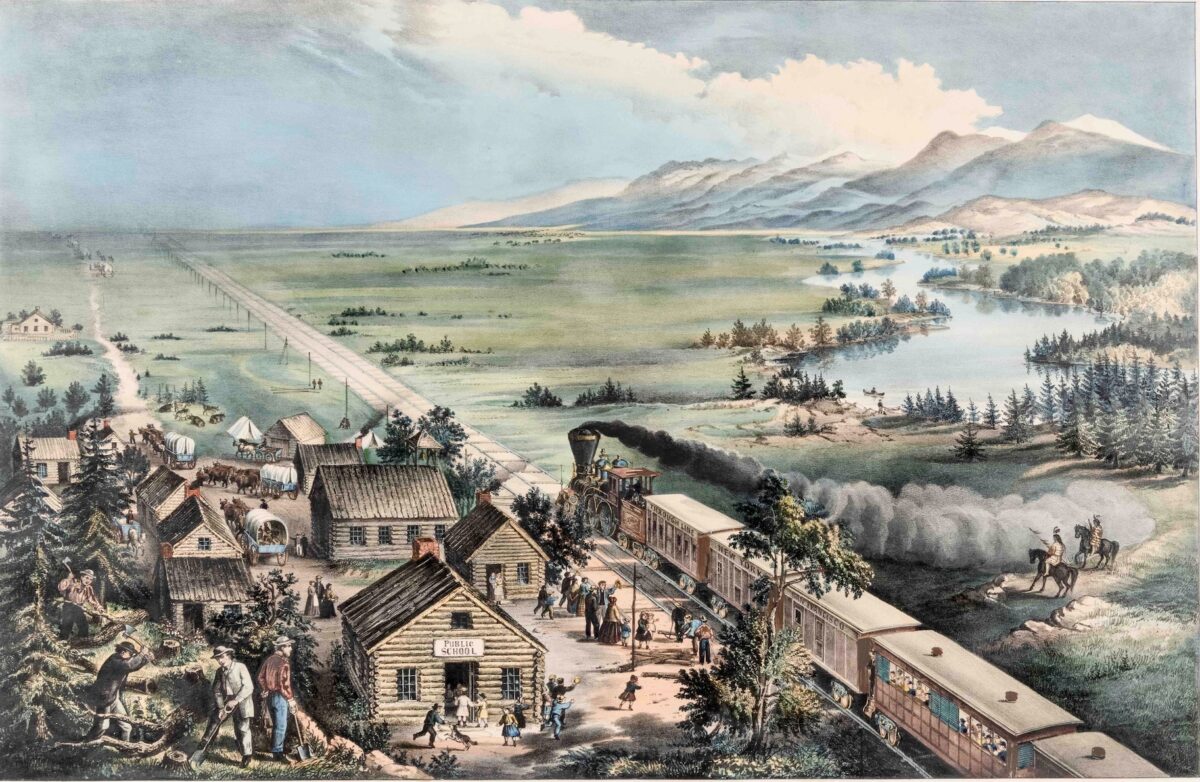 “Across the Continent: Westward the Course of Empire Takes Its Way” by Nathaniel Currier and James Ives. (Joslyn Art Museum, Gift of Conagra Brands)
American Essence

The colorful scenes created by Currier & Ives appeared in households all over America in the 19th century and beyond
BY David W. Swafford TIMEApril 11, 2022 PRINT

The impressive body of work by 19th-century lithographers Nathaniel Currier and James Ives is widely recognized today as hallmark Americana. Currier & Ives, as their business was known, specialized in producing inexpensive lithographic prints that were sold throughout the United States and in Europe, ranging from a couple dimes to $5, depending on size and intricacy. Before the days of widespread photography, many a home or office across America and beyond was decorated with the colorful lithographs that made Currier & Ives famous.

Lithography entailed producing illustrative prints from drawings made on a flat stone surface. From 1835 to 1907, the firm produced 7,500 lithographs and consigned millions of prints to vendors and agents in the United States and Europe. In so doing, the company became “the Grand Central Depot for Cheap and Popular Prints.” At the height of the two men’s success, 1850–1880, it is said their prints made up 95 percent of the market. The illustrations encompassed seasonal landscapes, urban and rural settings, the Rocky Mountains, the Mississippi River, architectural wonders, horse racing, gold mining, wagon trains, locomotives, clipper ships, steamships, and riverboats. They captured Revolutionary War scenes and, later on, Civil War scenes. They portrayed firemen, farmers, soldiers, hunters, housewives, businessmen, children, and families.

“It is hard to say whether Currier & Ives set out to intentionally create a ‘national public memory,’ but they certainly contributed to it,” says cultural historian and retired academic Bryan LeBeau, author of “Currier & Ives: America Imagined” (Smithsonian Institution Press, 2001), among other titles. “It has been said, with some truth, that we were founded on an idea, best expressed in the Declaration of Independence and by a select series of events that Currier & Ives pieced together into a national narrative (e.g. the landing of Columbus and the Pilgrims, the American Revolution, etc.) that could be projected onto the nation’s expansion westward as ‘manifest destiny.’”

A Nose for … Sensation

Nathaniel Currier learned the art and science of lithography as a teenager in Boston, apprenticing under the Pendleton brothers William and John. In 1834, at 20 years of age, he went to work for a Philadelphia lithographer named M.E.D. Brown. But Currier was not content being an employee; he wanted a share of the market itself. By 1835, he moved to New York and opened his own printing business, N. Currier Lithographer. Along with taking mundane printing orders such as advertisements, letterheads, business cards, and invoices, Currier followed the news and produced occasional prints of sensational events. As early as 1835, he produced a print of the Planter’s Hotel in New Orleans, which had caught fire and collapsed, trapping 50 people under the burning rubble. Another early print was the fateful fire at the New York Merchants’ Exchange (the 1827 building). Neither print sold well.

In January 1840, however, the commuter steamship Lexington caught fire in New York Sound and burned out of control. Passengers were forced to abandon ship, and 143 individuals perished in the frigid water. Three days after the incident, Currier published a detailed graphic of the event in partnership with the The Sun newspaper (1833–1950). “Currier’s presses ran day and night for months to fill the demand for the Extra Sun broadside,” noted Robert K. Newman on the website of New York’s The Old Print Shop. The success established Currier’s name. Furthermore, it gave him the idea to contract scores of artists who could produce sensational illustrations to accompany major news stories. Since newspapers of the day were not illustrated, Currier’s prints were in demand. He concentrated mostly on shipwrecks, fires, parades, and sporting events. The business model did not survive long; by the 1840s, woodcut illustrations had displaced lithographic art in many publications.

In 1852, Currier hired James Ives as a bookkeeper. Ives was the brother-in-law of Currier’s younger brother Charles. His presence brought new blood and new zeal into the business. According to The Currier & Ives Foundation, James was a plump and jovial man, presenting the exact opposite image of his boss, Nathaniel, who was tall, slender, introspective, and given to melancholy. As time passed, James convinced his boss to expand the range of prints being produced to include landscapes and scenes of everyday life, and to steer away from the sensational. He also encouraged direct sales to the public. A few years later, Nat made Jim a partner in the business and changed the name of the company to Currier & Ives.

Messrs. Currier and Ives did not produce the work themselves, although their influence was undeniable. The work depended on hundreds of hired craftsmen and craftswomen, a large team of dedicated people including artists, lithographers, printers, and finishers. Aside from those directly employed, the firm contracted numerous illustrators as well as sales agents and vendors. It also did business with numerous suppliers.

The manufacturing process involved drawing images or transferring drawn images onto thick, flat blocks of Bavarian limestone. Since lithography uses mirror images, the images had to be reversed on the stones. After the illustrations were drawn with litho crayons, chemical bonding was then applied over the stones. When the surface was fully bonded, grease-based ink was applied to the image, and the stone was wetted with water. Wove paper was then placed on top of the stone and pressed downward with an iron plate. Once the prints were dry, they were sent upstairs to colorists (primarily young German girls), who would apply diluted watercolors to the images.

Of the many artists and illustrators employed by the firm, some of them worked as employees while others were contracted. Among the well-known were: John Cameron, George Henry Durrie, Otto Knirsch, Louis Maurer, Charles Parsons, Napoleon Sarony, Arthur F. Tait, and Thomas Worth. The firm’s most prolific artist was a woman, Fanny F. Palmer. She became known as the first woman in American historiography to make a living as a dedicated, full-time commercial artist.

To this day, the original Currier & Ives lithographs are still quite popular among museums and collectors. The American Historical Print Collectors Society (founded in 1975) even today fields more questions about Currier & Ives’ work than about any other type of print. Judging by recent auction sales, their demand is high and values are steep. In 2019, an original copy of “Across the Continent” brought $62,000 at New York’s Swann Galleries. Before that, in 2004, an original copy of “The American National Game of Base Ball” sold at Skinner’s for an astounding $76,375.

In 2004, the trustees of the Michele and Donald D’Amour Museum of Fine Arts in Springfield, Massachusetts, unanimously voted to acquire 787 Currier & Ives prints from a private collector—the largest private collection in the country at the time. Today, the museum features a permanent exhibit hall for rotating selections of those prints. In 2016, the Joslyn Art Museum of Omaha, Nebraska, eagerly welcomed a gift of nearly 600 Currier & Ives lithographs from ConAgra Foods, Inc. (now Conagra Brands). The Joslyn subsequently organized a selection of those prints into a traveling exhibit entitled “Revisiting America: The Prints of Currier & Ives.” In 2021, the exhibit was shown at the Shelburne Museum in Shelburne, Vermont, and later at the Florence Griswold Museum in Old Lyme, Connecticut.

What exactly is the appeal? In a word, the past—combined with a wisp of nostalgia. Bryan LeBeau says that through the years, the popularity of Currier & Ives’ work has waxed large whenever American society becomes nostalgic. Could today’s America be nostalgic for yesterday? Perhaps so.

“Part of the appeal is about the past—both America’s past and people’s personal past,” said Amy Kurtz Lansing, curator at the Florence Griswold Museum. “Older viewers [of the exhibit] remembered being surrounded by Currier & Ives prints on the walls of their childhood homes or the homes of their grandparents. For younger viewers less familiar with Currier & Ives, they appreciated the way the images were ‘unpacked’ in terms of American history and representation.

“I think there is a way in which the sentimentality of Currier & Ives, with the emphasis in many of them on home and family, speaks broadly to people. These are narrative images, with captions to supplement the visual narratives, all of which makes them quite accessible regardless of who is looking at them.”

Even though the commercial market for the original prints dissipated by the late 19th century, in subsequent years a resurgence of popularity led to widespread reproductions. By the 1920s and 1930s, images of the prints were plastered on everything from calendars, Christmas cards, and writing paper to dishes, glassware, and decorative tiles. Many of the reproductions portrayed home and hearth, kittens at play, horses in the snow, and barns full of hay. Although not all of the portfolio’s images fit into these benign parameters (some, judged by today’s sensitivities, were demeaning to immigrants and people of color, while others were blatantly nationalistic), most of the drawings had a simple appeal that reached into the nation’s soul and pulled at its heartstrings.