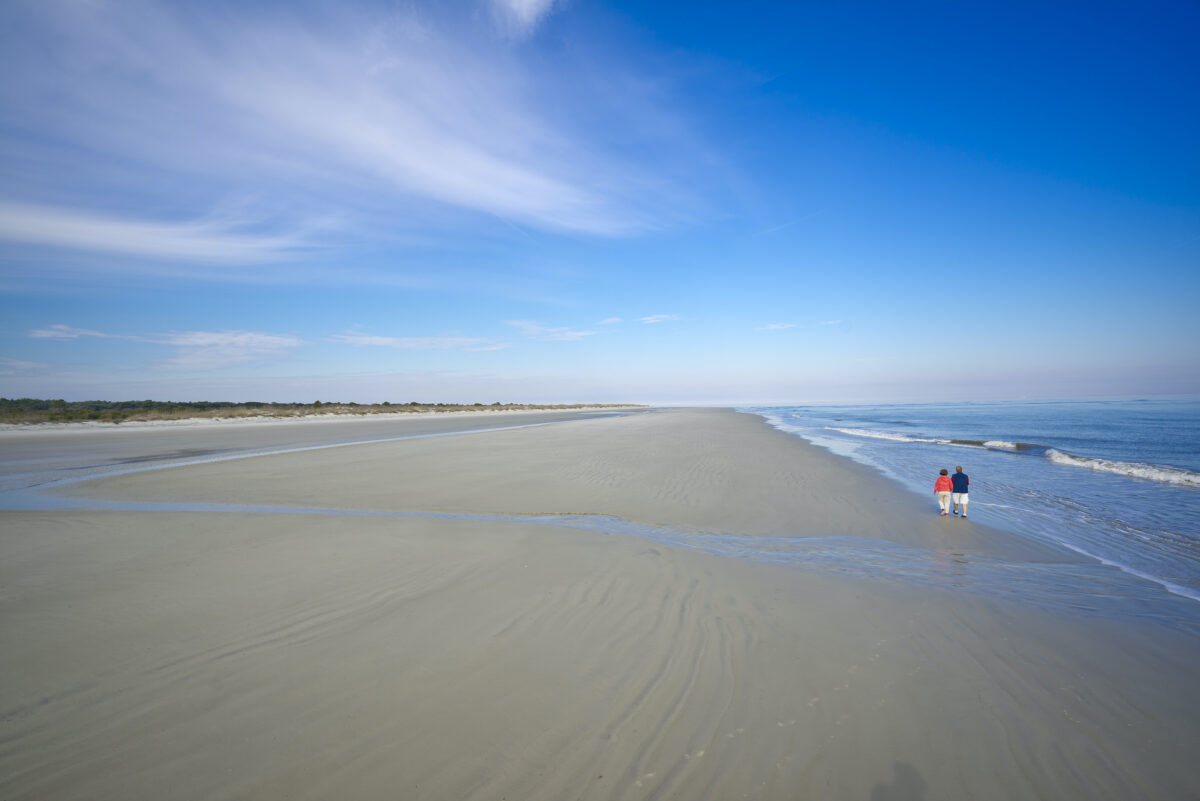 Cumberland Island’s 18 miles of Atlantic beach are so vast that the view disappears over the curvature of the earth. It’s not unusual to see feral horses grazing among its white sand dunes. (Ralph Daniel/Explore Georgia/TNS)
Travel

If there’s one thing that Southerners do well, it’s keeping a secret. So well, in fact, that in September 1996 when John F. Kennedy Jr. married Carolyn Bessette in stunning secrecy at Cumberland Island’s First African Church, only a very few, including residents of nearby St. Mary’s, the gateway to Cumberland, knew about it until days later. The wedding was fairy tale-perfect, elegant, simple and, most of all, utterly romantic under its cloak of anonymity.

There are few places comparable to Cumberland Island. Its wildness is purely poetic, its waves echo against the shoreline with the lyrical rhythm of iambic pentameter, and its live oaks, untold acres of them, sway and sing in cadence with salty breezes.

The southernmost of Georgia’s barrier islands, the string of islands protecting the mainland from the tumultuous Atlantic, Cumberland’s lure fringes on the mystical. The profuse, unbroken canopy of treetops, etched with silvery sunlight on the spring day we visit, stretches across the island like intricately tatted lace, hiding a cache of nature’s secrets: a jewel-like painted bunting flitting among the oaks, a raccoon skittering after a fiddler crab, an armadillo sunning himself on a sandy knoll, a whitetail deer nibbling on a bed of pungent mushrooms, or a bobcat shadowing its next meal of an unsuspecting field mouse.

On this tiny island, reached only by ferry or private boat, quiet reigns, the absolute silence punctuated occasionally by the throaty bellow of an alligator searching for its mate or the drone of a passenger jet as it streams high above the clouds. As a saffron-dappled butterfly brushes just in front of my face, I can almost hear the fluttering whispers of its wings.

Just steps into my sojourn on Cumberland, a herd of feral horses came clip-clopping through the woods and dense palmetto. One or two of them stop near us, snatching a big mouthful of Spanish moss drizzling from a live oak.

The horses were once part of Cumberland’s plantation system, but either escaped or were abandoned by their owners. They have since bred outside of domestication, and now dozens roam Cumberland’s diverse and distinct topography that includes the salt marsh of its western end, the maritime forests that dominate its center, and the eastern beach, a series of dunes and shoreline carved by the Atlantic.

According to the National Park Service, Cumberland’s herd of feral horses is the only one on the Atlantic coast that is not managed, which means no food, water, veterinary care, or population control is provided. In other words, they are bound only by nature’s whims, as is all of the wildlife on the island.

The first humans to enjoy Cumberland’s 18,000-plus acres of captivating beauty were the Timucuan Indians, followed by the Spanish, and then the British, under explorer James Oglethorpe’s leadership. Oglethorpe established a hunting lodge on Cumberland and christened it Dungeness.

Revolutionary War General Nathaniel Greene bought land on Cumberland in 1783, with plans to build a home near the site of Oglethorpe’s hunting lodge. But before he could, he died, and his widow, Catherine, then married Phineas Miller. Together the Millers saw Greene’s dream home come to fruition, and it also was named Dungeness.

The Miller Dungeness was an impressive four-story mansion complete with 6-foot thick walls at its base and 16 fireplaces. Constructed of tabby, Georgia’s so-called coastal concrete that’s a mixture of equal parts lime, sand, oyster shells, and water, Dungeness was so grand that curiosity-seekers came over from the mainland just to see the house.

Cumberland was home to several working plantations with Sea Island cotton the primary crop, but after the Civil War freed slaves remained on the island and developed their own communities, including “The Settlement,” an area on Halfmoon Bluff where the First African Baptist Church is located and where the hush-hush Kennedy-Bessette nuptials took place.

After the plantation era on Cumberland ended, the Millers moved away, with Dungeness slowly spiraling into deterioration. In 1866, the once-stately mansion burned to cinders.

The island remained deserted until the Winter Resort Era of the 1880s when wealthy Yankees that included the last names of Rockefeller, Vanderbilt, and Pulitzer began snapping up Georgia lands as private hunting retreats. Pittsburgh steel magnate Thomas Carnegie acquired Dungeness, and he and his wife, Lucy, rebuilt the home on the same Oglethorpe/Greene/Miller location and landscaped the surrounding acreage in a series of trellised formal gardens and lush lawns. Carnegie’s Dungeness was an astounding 44-room, 40-building monolith that resembled a Scottish castle.

Dungeness burned in 1959, never to be rebuilt. The charred skeleton of Dungeness remains on the island, but time, salt air, and sun have seared its bones to whiteness. Varmints like rattlesnakes and racoons now lurk in the old tabby, making it seem almost unbelievable that Dungeness was once one of the largest and most splendid homes in any era of American history.

After Carnegie’s death, Lucy remained on Cumberland. She offered to build a home on the island for each of her nine children, and four accepted. Three of the homes still stand, including Stafford Plantation, which is privately owned, and Plum Orchard and Greyfield, which has been transformed into a graceful, luxurious, and romantic inn. Tours of the 22,000-square-foot Plum Orchard mansion are available through the National Park Service.

Greyfield, built in 1900 and opened as an inn in 1962, remains in the Carnegie family and looks much the same as it did when it was built around the turn of the century: wide porches, wooden floors, airy and light-filled rooms, and all surrounded by massive oaks festooned with Spanish moss. Cell phone service is limited, and there is no Wi-Fi, television, or other electronic contraptions to distract you from Mother Nature.

Unless you stay at Greyfield, the only way to get around Cumberland is on foot. No public vehicle access is allowed. No bicycle rentals are available at this time, but on a limited basis you can take your own bicycle via the ferry service from St. Marys. Cumberland Island, declared a National Seashore in 1972, does offer backcountry camping, with reservations made through the National Park Service.

From Cumberland’s spellbinding, unforgettable beauty to its 18 miles of gloriously isolated beaches where the view disappears spectacularly over the curvature of the earth, to its distinctive history, and even to its top-secret weddings, its remoteness is the perfect ingredient for a special romantic getaway for those who love and appreciate nature.

Bring food, drinks, and insect repellent, as there are no shops, stores, or other amenities on the island. Comfortable shoes are a must. Water bottles can be refilled at several places on the south end of the island. Some areas are private residences, so please respect the posted signs.