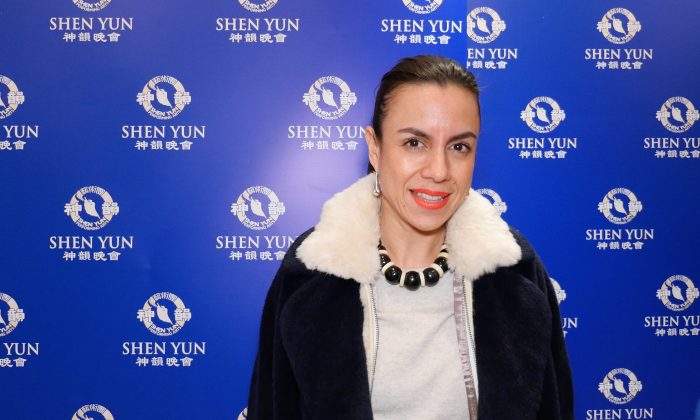 NEW YORK—Mariana Suarez, a cultural events producer, has made a career for herself through presenting and promoting the art of cultures. She understands first hand the power of bringing culture to life through a live performance, and what effect that can have on a new audience.

On Jan. 15, Ms. Suarez saw Shen Yun Performing Arts bring to life 5,000 years of Chinese civilization through music and dance, and felt she had been on a journey.

“It touches you personally, and that’s one of the powers of the dance form, or the art form, is that it connects you at a personal level. And it’s transformative,” Ms. Suarez said.

It touches you personally, and that’s one of the powers of the dance form, or the art form, is that it connects you at a personal level. And it’s transformative.
— Mariana Suarez, cultural events producer

The production was impeccable, the choreography superior, and the talent extraordinary, she said. But it was the history and authentic culture embedded throughout the program that made it so special.

Shen Yun’s artists have done what no other group has in reviving the traditional, divinely inspired Chinese culture through the arts.

Ms. Suarez noted the newness of classical Chinese dance—an expressive, independent dance system passed down through the dynasties—and immersed herself in the cultures shown through the many folk and ethnic dances.

In one, female dancers don the patterned skirts and colorful beads of the Tibetans, in an energetic dance in the Himalayas. Their long sleeves symbolize the Tibetan “khata,” a scarf offered as a sign of hospitality, offered skywards in celebration of the divine in this dance, according to the program.

In another dance, Ms. Suarez was taken to the Qing Dynasty, where Manchurian maidens were at once playful and elegant in their elaborate headdresses and raised “flower pot” shoes.

Then there was a dance on the lush green grasslands home to the Mongolians. Male dancers used thin-skinned paddle drums in a powerful, nimble dance.

China is home to over 50 ethnic and folk minority groups, and every year Shen Yun adapts dances from these groups for the stage in its all-new performances.

Ms. Suarez said she especially loved seeing these dancers come together in large groups on stage. The way the dancers moved together harmoniously while each individual retained their own expression was “very powerful,” she said.