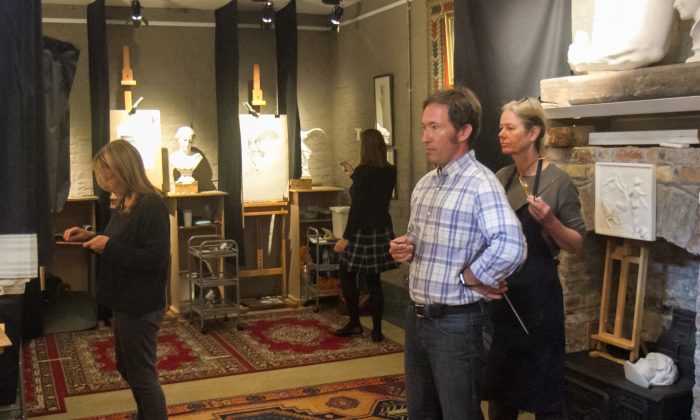 Co-founder and director of The Barnes Atelier of Art, Travis Seymour reviews a student's work in his atelier in London on Sept. 12, 2017. (Milene Fernandez/The Epoch Times)
Arts & Culture

Cultivating Mastery at The Barnes Atelier of Art

A glimpse into the atelier art movement
By Milene Fernandez

LONDON—Following just a half hour train ride from the center of London, a short walk along the River Thames and along the bend to Barnes High Street, you pass various shops—a grocery store, a cafe—and while you might keep an eye out, passing the fishmongers, then a hardware store, you could easily miss The Barnes Atelier of Art. The small brick building is tucked at the end of a narrow, moss-covered alleyway. Once you see the distinctive wrought-iron sign jutting out and the lion’s head knocker on the door, you know you are at the right place.

“It was an old bakehouse,” Nancy Fletcher said.

“That’s why we kept the oven downstairs,” Travis Seymour chimed in.

“And it does work,” Fletcher said, smiling, her eyebrows rising as she looked at her husband.

After nine months of renovating the building and using it as their studios for a time, the artist couple founded the atelier a year ago in the southwest London district. Barnes is a part of London that seems oblivious to the big city. With 18th- and 19th-century buildings, a high proportion of independent shops and boutiques, a farmers market, a duck pond, and plenty of peace and quiet, the community is the perfect fit for The Barnes Atelier.

In the broader scope of the increasing number of ateliers that have emerged in the past two decades around the world, the Barnes is especially keen on passing on the classical realist tradition, a visual language of Western art that has been developing for more than 700 years. Above all, the artists of the atelier value quality over quantity and artistry that is backed by masterful skill.

Fletcher is from the agricultural area of Lincolnshire in North England. Seymour is from the North Carolina coast. They shared with me their journey as a couple, as painters, and as teachers. It quickly became clear that besides the oven, the warmth of The Barnes Atelier stems from Seymour and Fletcher’s passion for creating and fostering beautiful art.

“Everyone is always so amazed when they find us,” Fletcher said, not only referring to their nestled location, but mostly to their artwork and teaching.

The couple met as students at the Angel Academy of Art—one of the main art academies in Florence, Italy, that teach in the classical realist tradition. They also took extra workshops at The Florence Academy of Art and at Charles Cecil Studios, before moving to New York City for Fletcher to study at Jacob Collins’s Water Street Atelier—the precursor of today’s Grand Central Atelier.

Fletcher and Seymour were particularly impressed by Collins’s work and his way of teaching; he was the first teacher to give Fletcher a demonstration. “It was possibly the best move that I have made,” Fletcher said. “It helped me to no end.” Collins proved to possess all the qualities of a principled mentor, which the couple would later emulate.

After two years in New York and some time in North Carolina, the couple moved to England. Seymour’s paintings were selling in several galleries in the United States, but Fletcher was receiving more commissions from England. “We had an agreement we would go in the direction of whoever’s career was strongest,” Seymour said. “We have had more success in this country with this particular style of portrait.”

A couple of Fletcher’s portraits were exhibited in the BP Portrait Award exhibitions of the National Portrait Gallery in London in 2012 and in 2015. Her first at BP was a portrait of Seymour sitting on a chair with his palette and paintbrushes in hand. It has a mesmerizing quality about it, with light effects inspired by the Danish Golden Age painter Christen Kobke.

“He’s going to be my muse, obviously, for the rest of my life,” Fletcher said, smiling.

The painting was printed for the banners of the National Portrait Gallery, which provided great publicity for Fletcher’s work and at least two years of commissions.

“At that point, I discovered who I was as an artist and what I wanted to explore,” Fletcher said. “Being under pressure, back in London, doing the commissions, having a high-profile agent push my work, and understanding the competition out there.”

Around that time, Seymour was teaching at the LARA (London Atelier of Representational Art) while he renovated the old bakehouse that would become the Barnes Atelier.

Seymour paints figures with understated narratives. He was just starting a three-quarter life-size figure of a lady in an evening dress, and the canvas could be seen leaning at the back of the atelier’s upstairs studio. He spends most of his time teaching, reserving one day a week for his own painting, while Fletcher takes care of their two children during the day and paints commissioned work in the evenings.

“We have very different lives now than when we were in school, but we both look back very fondly on those years in Florence and in New York,” Seymour said.

“It was monumental in our lives,” Fletcher said.

The walls of the atelier’s kitchen, stairwell, and upstairs studio hold academic drawings and paintings Fletcher and Seymour made during their student years. The figures are perfectly proportioned; the shading looks impeccably smooth—no lumps, bumps, spots, or specs of graphite on the paper. Some of the drawings took about 80 hours to create; a few were left unfinished, revealing the preparatory line drawing below the knees.

Only a few of the paintings on display show the couple’s personal styles, to leave ample space for students to develop their own. Seymour’s attitude to teaching could be summed up as “do as I do.” And what he says to students is consistent with what he does. “Talent is certainly going to help put you at the top of any field, but not without diligence and dedication, [which is] the groundwork for success,” Seymour said.

The downstairs studio is lined with casts, separated by black curtains, for students to draw in the morning hours. After a lunch break, they fill the upstairs studio to draw a portrait or figure from a model. Fletcher and Seymour give demonstrations throughout each trimester.

The couple decided to set the standards high. It takes a hearty degree of dedication to create works of art with the techniques of the old masters. “Yes, this is difficult,” Seymour said. “If it would be easy, everyone would be doing it.” The intimate space of the atelier itself lends itself to only accommodating a select number of students.

“I say to my students, we are in London. Like New York, there are plenty of places to learn how to draw and paint. This is not the only way by any means, but it’s the method I have chosen to use, which I can translate effectively,” Seymour said, referring to his work. “The path to technical proficiency can be difficult to navigate, and I try my best to lay it out as clearly as I can for them.”

On the second day of the fall term, the students began the afternoon by determining who would have each easel position in front of the model. The students randomly picked pieces of papers that were numbered with the names of old masters on them: 1-Michelangelo, 2-Leonardo, 3-Rubens, 4-Raphael, 5-Van Dyck, 6-Rembrandt, 7-Titian. The eighth easel was left for Seymour to draw alongside them.

“There’s 13 minutes left in this sitting, so anyone who has chosen their spot already can begin what you were doing yesterday: Sketch, sketch, sketch,” Seymour announced. The students made little marks for the top and the bottom of the figure, then measured the middle. “When you find the landmark that lies halfway on the model, you will know it has to be on that line, and then [you can determine] your width-to-height ratio. That is all you want to do for the first 20 minutes,” Seymour said.

That first 20-minute sketch is just a warmup; after finishing, the students erase and start all over again. “There are lots of limitations we all put in front of us that can easily be remedied, but which are not easy to implement. So from the very beginning, just sharpening your pencil effectively can render almost miraculous effects, but it requires a conscious effort, because you have to stop what you are doing and go sharpen your pencil,” Seymour said. “The mantra is ‘sharp pencil, go slow.’”

Seymour is currently teaching seven full-time students. “We are very fortunate that there are a continuous number of students who particularly like the way that Nancy and I teach and want to dedicate three-plus years to learning from us. We feel very humbled.

“There can be many sacrifices that students make, such as temporal, familial, and financial ones, in order to study with us, and we don’t take that for granted. I try to see each of them at least five times a day, every day.” Most of the students have a minimum commute of an hour, and two of them commute more than three hours.

While the three-year Master Academy program is designed for aspiring professional realist painters, part-time students receive the same degree of instruction during the day. “Part-time students benefit from seeing the work done by full-time students, and I do think, in a small environment like this, it’s quite nice to see a fresh face every so often—to keep things snappy,” Seymour said.

The Barnes Atelier of Art attracts incredibly dedicated students who want to draw and paint all day, aspiring to mastery. The intense concentration, coupled with the peaceful atmosphere in the quaint atelier, forges diamonds—a wonderful environment for painters to emerge within the classical realist tradition.

The couple has received commissions from clients in Barnes as well. “You build upon that and you keep on building, and it’s amazing,” Fletcher said. “It’s what life is about, the memories and the relationships that you have with individuals.”

Read More
A Resurgence of Art
Artist and Atelier Founder Jacob Collins on the Vitality of Masterful Art
Florence Academy of Art Bridges Old and New in the US
Artist Jessica Artman Finds Freedom in Structure
Self-Portraits: Meeting the Artist Eye-to-Eye
What Unfinished Masterpieces Say to Living Artists