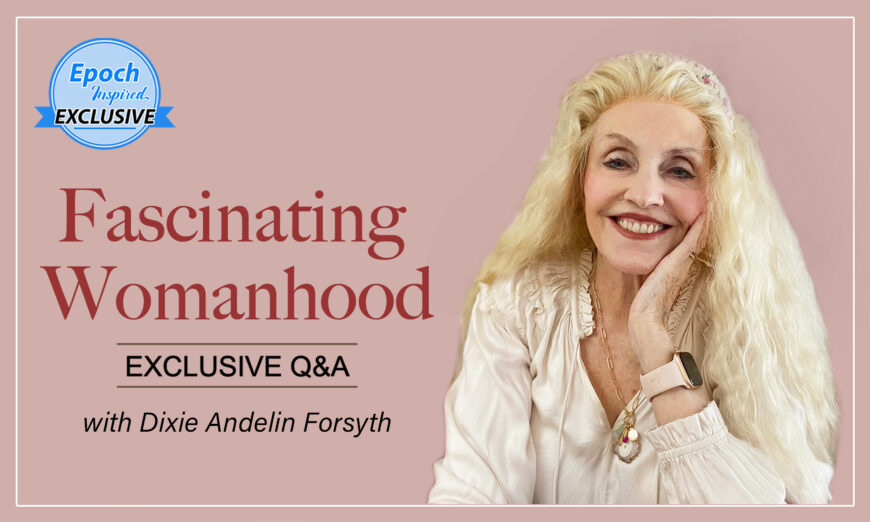 Feminine power is deeply connected to divine traditional wisdom, which, when cultivated, nurtures and uplifts all life benevolently.

True feminine power does not deviate from the God-given gifts of compassion and empathy that females innately have within. Tapping this life-changing power’s full potential entails cultivating good moral character, learning to understand men, and embracing family and community roles that are led with grace and kindness.

Epoch Inspired had the opportunity to talk to renowned feminine power expert Dixie Andelin Forsyth, the president of Fascinating Womanhood, who believes that no revolutionary movement in history, be it 60s feminism or the like, can offer the same results in harmony and empowerment in a female’s life as a “fascinating woman” can. Following these feminine power principles for the greater good, nurtures consideration in the uniqueness of gender and in kindly fulfilling gender roles in societal life, which in turn maintains the standards of a healthy, mature civilization.

Forsyth, 72, from Springfield, Missouri, is the protege of her mother, Helen B. Andelin, the author of the book “Fascinating Womanhood” from 1963. This book on feminine power, as Forsyth says, “always stood in contrast with modern-day feminism for its emphasis on personal empowerment through acceptance and cultivation of femininity, romance, family, and home.”

In this exclusive Q&A, Forsyth speaks more on the secrets and practical tips of successfully cultivating this innate wisdom that is within all females. This can be studied and implemented through her family’s legacy on the Fascinating Womanhood Principles. Her two new books that she is writing will be out on the market soon: one for single women, and the other a cookbook with “tried-and-true but diverse” recipes that men will adore. Read on to learn more and enjoy the insightful interview.

Epoch Inspired: How is feminine power good, and how does it contrast to healthy masculine power?

Dixie Forsyth: Feminine power is the ability or skill to make the world want to change, rather than the masculine approach to persuade or force it to change. It is expressed best through influence while keeping our femininity intact. Our perspective is nurturing, empathetic, supportive, and bonding. We are more open to reaching out and talking, even getting help with what we are trying to do. Instead of crashing through doors, we encourage doors to be opened for us. It complements beautifully with masculine power and tempers it; refines it. We need both.

Epoch Inspired: How has Fascinating Womanhood shaped your vision for women, to help empower them in the roles of marriage and family?

Forsyth: It has helped me realize that my greatest power is in my femininity and influence, which inspires masculinity in men. There is nothing more empowering than playing to ones’ own strength in marriage, family, and everything else. We complement each other with our different natural abilities. Fascinating Womanhood principles will help every woman build a strong, healthy civilization—one marriage, one family, and one nation at a time.

Epoch Inspired: As women have become more independent today, can you explain what is “feminine dependency” and how to cultivate it as an independent woman?

Forsyth: “Independence” is a relative word. No one is truly independent or doesn’t need anyone. We need people to grow our food, build our roads and homes etc. The ideal in a relationship is interdependence, without losing the individual. Feminine dependency doesn’t mean submission or master/slave type relationship. Fascinating Womanhood is about sustaining each other. There are two leaders in a successful romantic relationship: the task leader and the relationship leader. Both are vital. This is a division of labor that works and is complementary to each other.

There is an old saying that if two people are the same, one is unnecessary. An effective division of labor is far superior to everyone being the same. This is true in business but equally true in the creating and raising of a family. Situations come up constantly that require the soft touch of a relationship leader but the structure and strength of a task leader. This is not pitting one person against another. Women tend to be more relationship-oriented and men tend to be more oriented toward seeing and accomplishing a goal. We need both.

Epoch Inspired: As a mother of seven children, what is your must-follow advice for all moms out there to help their young and teenage kids learn how to communicate well with the opposite gender?

Forsyth: I have two very important pieces of advice; build a great marriage for your children to see and experience, and teach your daughters about Fascinating Womanhood. High-functioning males and females who understand and appreciate the strengths in each other will respect the differences. Children always learn best by example, be their example! Raise feminine daughters and masculine sons.

Epoch Inspired: You said your mother helped you find a “great sense of worth as a feminine woman” and taught you how to understand men. Can you explain more about this?

Forsyth: My mother’s example was easily the most powerful teaching experience I had. There are things she said, yes, but watching her consistently understand and support [my father] was powerful in my life. Mom was his biggest fan and she showed it constantly. She got excited about his dreams and goals; even small successes. He adored her. I remember once when she had to be gone for a few days, he placed her house shoes by the door just to look at them.

Epoch Inspired: How can a true feminine woman help the men in her life—her father, brothers, husband, and friends—heal their emotional wounds and express their feelings better? How can she build trust with them?

Forsyth: Trust is built with anyone as the person sees that you understand them, are sympathetic with them, and also value their strengths and intentions. A woman who is able to understand and apply this is also able to forgive the many normal mistakes a man, or anyone, will, of course, make.

When you help a man identify what he is feeling in a supportive way (which is hard for most men to do), it leads to a feeling that he is good enough in your eyes, even being imperfect. This is one of a woman’s natural abilities when tapped into; to sort out feelings and verbalize them. A woman who understands the principles of Fascinating Womanhood has a truly powerful ability to help everyone, especially men, with their many emotional needs.

When you learn how to understand men, their need for competence, sincere admiration, and validation, combined with femininity and strengthening your own character, that will do more to build trust with them than anything else.

Epoch Inspired: In relation to Fascinating Womanhood, tell us how feminine power can help in dealing with incompatibility in relationships, especially in marriage.

Forsyth: Most marriages aren’t built on incompatibility; those most often occur afterward for a variety of reasons. Sometimes one of the partners seems to change because of addictions or other dysfunctions. When this happens, that is another relationship role; where the woman is the one who probably will identify it even before he does; perhaps, bringing it up in a caring way early on in the relationship where he might not.

Women are just a little bit more emotionally malleable. Maybe it’s easier for us to sort of “jump into his skin” and imagine how he might be feeling. This is part of understanding men. One of our feminine powers is having this ability to sense what he needs and what’s going on, at least seeking to know what he needs. We end up being leaders in terms of healing in relationships. When a woman learns the many aspects of feminine power in understanding her man, or anyone, it almost seems like magic to any relationship, assuming the person is of basic good character. This is exactly what Fascinating Womanhood teaches women to do.

Epoch Inspired: Many relationship educators, as well as you, have recommended the following: “Don’t plan a career for yourself which could damage your success as a wonderful wife, mother, and homemaker.” Can you explain more on this?

Forsyth: It’s perfectly fine to plan a career for yourself but the real question is really this: What is most important to you in your life? Is being a wonderful wife, mother, and homemaker more important than having a career? Something must come first!

If your primary goal is to have a successful marriage and family, then any job or career will not become all-consuming. But if, on the other hand, your first goal is a career, you very well might and probably will damage your marriage and family. This is because human beings and all they entail are complex and take an enormous amount of energy and time to handle well. Relationships have to be taken care of daily and children must be raised, not just fed and clothed. Some women manage to do both rather well, but it is very difficult and I have found that even those who do both well, always put their marriage and family first.

Epoch Inspired: Do you have any practical tips on how a career-driven woman can change from her masculine energy (yang in Chinese) to her feminine energy (yin in Chinese)?

Forsyth: First, she has to decide what she wants. If she is truly “career-driven,” she puts top priority on her career; everything else comes after that. If she wants to become more feminine in the workplace, especially if she is in a masculine environment, she can focus on how she can influence relationships with the co-workers around her and how she can behave with character, grace, and all the feminine strengths.

But if a woman wants to become more relationship-oriented at home (feminine energy), she can start by changing her clothes to fit her more relationship-oriented side. This might include clothing that makes her feel more feminine and will signal the change in her role. But she can also realize that a change in perspective is needed. It’s all about relationships and how she can provide a nurturing environment that includes the physical side of home—food, and clean, comfortable surroundings, but also the emotional, and spiritual well-being of those she loves.  She can then “put away” the need for the attitude of “let’s get it done now; relationships and feelings aren’t important here” that’s likely required at a demanding job.

Epoch Inspired: In your book “Fascinating Girl: Vintage Edition,” Dr. Max Levine, M.D. and Psychiatrist of New York Medical College has been quoted as saying, “I speak not as a clergyman but as a psychiatrist. There cannot be emotional health in the absence of high moral standards and a sense of human and social responsibility.” As a lady who lives by Fascinating Womanhood principles, tell us more about this.

Forsyth: The Fascinating Womanhood message is not just about building a great marriage, it’s about teaching and giving women the tools to build a genuinely good character. All successful relationships must be built upon trust and honesty. No one can have high moral standards without those two character traits firmly in place. Emotional health depends on being able to count on the ones you respect the most. Fascinating Womanhood has always stressed the absolute need for good character, boundaries, and high moral standards to navigate all relationships, especially those within our own households and communities.