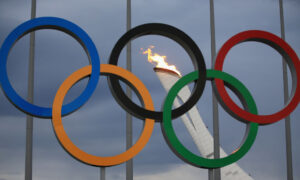 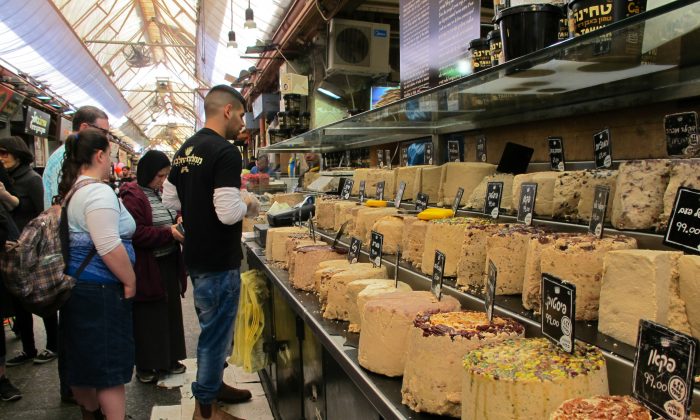 Halva and kugel and tzhug, oh my!
By Bill Strubbe
biggersmaller
Print

When pondering the Holy Land, images of the ancient walls of Jerusalem, catching rays on a Tel Aviv beach, the Sea of Galilee where Jesus walked, and floating in the briny Dead Sea readily come to mind. But culinary delights? Well, not so much.

But once you’ve wandered the shouks, or street markets, of Tel Aviv and Jerusalem, and encountered pyramids of golden apricots and dates, bourekas and kanafeh piping hot from the oven, brilliant mounds of turmeric, paprika and sumac, and stacks of braided hallah, you’ll be hard-pressed to forget them.

Spanning a half-dozen congested blocks of Levinsky Street in Florentin, Tel Aviv, the mom and pop shops that comprise Levinsky Market established by immigrants from Greece, Romania, and Turkey are a far cry from sterile grocery stores. Part and parcel of shopping here is the smell, touch, and taste; why would you buy something without tasting it first?

This is not the place to be meek and shy—it is loud and bustling, and the locals haggle, jostle, and elbow. The conundrum of what exactly is Israeli food is answered here on this hectic street. It’s a hodgepodge of disparate influences from around the world, just like Israelis themselves.

Penso Bakery sells only two items: drinks and bourekas, a flaky filo dough filled with cheese, spinach, and spiced potatoes best enjoyed within minutes from the oven. Bourekas are the specialty of the Penso family, which has been serving their age-old Turkish treat here for 80 years. The drinks are also a specialty: ayran, a Turkish milky yogurt drink (like a rose lassi); tosseta, made from almond milk; and tamahindi, an Arabic version of lemonade. Arrive at Penso at the right time and you might be sitting elbow to elbow with Israeli Prime Minister Benjamin Netanyahu, who frequents the place.

The dusty window of Konditoria Albert with its meagre display looks like it hasn’t been updated in decades, but don’t let that deter you. Aficionados of marzipan know that Konditoria Albert is the singular place to buy the treat in Israel. The fresh fluffiness simply melts in your mouth.

It’s a hodgepodge of disparate influences from around the world, just like Israelis themselves.

The secret recipe for this almond dough has been handed down through several generations of the family of Albert Yaakov, a Greek immigrant from Salonika. The handmade almond cookies, marichinos made without flour, and equally delicious meringue kisses and Salonika pastries inspire a loyal following. Albert’s elderly son and daughter often hold court at the table where they hand-shell the almonds; customers and friends join them, chatting all the while.

If you love olives—or anything pickled for that matter—then Haim Rafael’s is the mythical shop to stop and nosh at. While a number of shops sell similar deli delights, our guide insisted that this was the very best place. Haim’s olives are packed in Greece just for this store. Additionally there’s pickled peppers stuffed with goat cheese, and pickled herring and fish using recipes dating back generations.

The owner, Benny Briga, appears like a mad scientist amidst a laboratory experiment, plucking cinnamon sticks from one jar, cherry preserves from another. He hands it to me and it’s utterly refreshing, the unusual flavour combination tantalizing the palate.

‘The Shuk’ in Jerusalem

In the heart of Jerusalem, Mahane Yehuda Market, aka “The Shuk,” is more of a pedestrian paradise. An estimated 80,000 to 90,000 people shop here weekly at the 350 stalls, and some vendors have been selling to three generations of the same families.

Halva can be bought throughout Israel, but the go-to place for this sesame paste confection is Halva Kingdom at The Shuk. I adore halva, but usually find the nutty seed flavour is overwhelmed by the sugar. But Halva Kingdom uses only honey. A double row of not-too-sweet blocks of halva await to fulfil your cravings in every flavour you could dream of—100 to be precise—including pistachio, walnut, date, cinnamon, toblerone, vanilla, and caramel.

Uzi Eli, aka The Etrog Man, hails from a Yemenite healer family descended from Rambaum (a medieval Jewish doctor also named Maimomides) and aims to heal whatever ails you, whether it be migraine, sinus, diabetes, or chronic fatigue. His shop attracts religious Jews in kippas as well as the dreadlock crowd.

The shelves are stacked with fresh fruits and vegetables, most notable among them the yellow etrog, a citrus fruit integral to the celebrations of Sukkot, and the leaves of qat, a plant from the Arabian Peninsula long used as a stimulant and aphrodisiac. The place is lively and fun, and the drinks are tasty.

The Cohen Brothers is where you can find Kugel Yerushalmi, an authentic delicacy brought to Jerusalem by Hasidic Jews in the 18th century and traditionally eaten with cholent and pickles after Sabbath morning prayer services. This noodle pudding is made from caramelized noodles spiced with black pepper, with a sophisticated interplay of sweetness and bite and a subtle, toasty flavour. It’s a taste of age-old history in every mouthful.

If you’ve never tasted Kurdish fare, then head for Morduch. The inauspicious-looking eatery is packed at lunch and on Friday with locals lined up for the famous homemade kubeh and soups. There’s a choice of red soup (beetroot), hamusta soup (with a tart lemon twist), and bamieh, an okra stew. The kubeh are semolina dumplings stuffed with ground meat seasoned with Baharat spice. Delicious!

Yallabasta.com is a fantastic website that covers Israel’s street markets with maps, listings, and photos of the various shops. For about $25 you can purchase a Bites Card, a passport to taste an ever-changing list of six of a specific market’s culinary treats at stalls you might not have found yourself.

For a guide to the best of Israeli tours, whether general tours or with a focus on food, visit ViaSabre at www.viasabre.com

Travel writer, journalist, author, and playwright Bill Strubbe has been visiting Israel for 40 years and is moving there in September to live on a kibbutz.